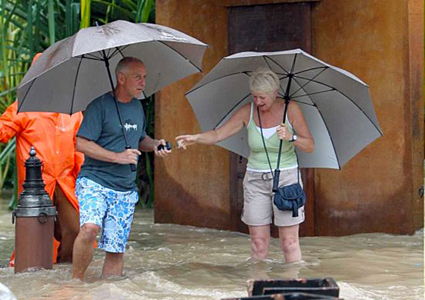 The Thai government has announced public holidays for government workers in Bangkok and neighbouring provinces on 27, 28 and 31 October due to the current flooding. All commercial banks will remain open during this time. Most private companies in Bangkok are expected to remain open. The US Embassy will be closed on these days, however, other embassies such as the German, British and Australian Embassies will remain open.
The centre of Bangkok, where the most popular tourist spots and all the main hotels are situated, has so far not had any flooding and all the main public transport systems and services (such as power and water) continue to be fully operative

There has been some flooding near the river at high tides, however the main hotels located along the Chao Praya river in the centre of Bangkok also continue to be fully operative so far. Currently, no hotel shuttle boats are allowed to operate on the river.

Areas in the northern suburbs of Bangkok remain flooded. Chatuchak market has announced that it will not operate this weekend.

Don Muang airport which is normally used for limited domestic flights has closed. Both airlines which operate from this airport, Orient Thai Airlines and Nok Air, have announced they will relocate their operations to Suvarnabhumi airport. All other airlines use Suvarnabhumi airport which is operating as normal. In the current circumstances, however, we are allowing more time at the airport before and after flights than normal.

The northern train route from Bangkok / Ayutthaya / Chiang Mai has stopped running until further notice due to the high water levels. While it remains closed, we will change the mode of transportation to Chiang Mai to coaches or internal flights.

If you have any questions about travelling to Thailand with us during this period, please do not hesitate to contact us.