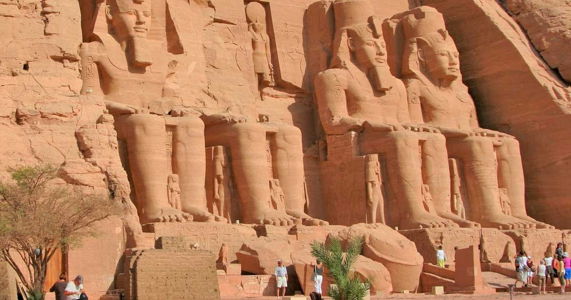 When I first heard I would be travelling to Egypt, the towering Abu Simbel Temple was right at the top of my wishlist of sights to see in this historically rich country. 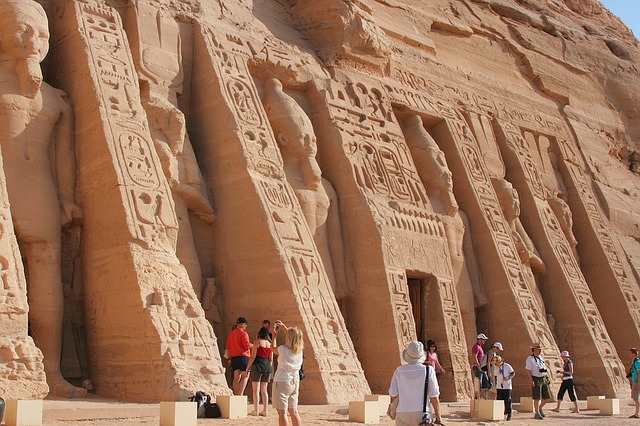 The trip to Abu Simbel started quite early – our guide told us to be up at 04:30 am because the drive to the actual temple lasts for about three and a half hours. We were based at the impressive Helnan Aswan Hotel – which provided us with spectacular views of the stretching Nile River.

Since we were going to miss breakfast at the hotel, breakfast boxes were prepared for us to eat along the way, which included a selection of breads, pastries, meats, cheese and a juice. More than enough to keep us satisfied on our journey.

We stopped halfway along the way at a rest stop in the middle of the desert, together with hundreds of other tourists queuing to use the rest rooms or for a warm cup of coffee.

After stretching the legs, we hopped back in the bus for the final stretch towards the temples. All of us managed to get in a quick power nap, before our guide woke us up 15 minutes before to give us a quick rundown of what we can expect to see.

On arrival at Abu Simbel, you don’t initially see it. The parking area is situated behind the towering monument and it was a three minute walk – with Lake Nasser offering the perfect backdrop – until I finally got my first glimpse of it.

I was blown away at how big the statues are! Our Egyptologist guide told us that the whole temple was moved due to the flooding of the Aswan Dam. What a mammoth task that must have been!

Since guiding was not allowed within the temple itself, we were given a 30 minute photo album tour of the history and features of Abu Simbel whilst sitting in an area reserved for an evening light show.

Filled with knowledge, we were finally given the green light to head inside the temple. Photography of any kind was not allowed within the temple, and a few sneaky tourists who did try and get a few snaps were swiftly dealt with by the guards.

The inside temple walls were adorned with hieroglyphic script lit up by lights, which gave us a glimpse into the life of King Ramses II. The temple is also dedicated to the gods Ra-Horakty, Ptah, the goddess Hathor and Queen Nefertari – Ramsess’ favourite wife.

We spent 30 minutes exploring the wonders of the temple, before we browsed through the markets at the temple, which housed a wealth of souvenirs. Be sure to practice patience and good negotiation skills while you’re here though!

Our stay at Abu Simbel lasted for two hours, before we said goodbye and headed to the next part of our Egypt tour – spending a night on a traditional felucca sailboat on the Nile River!