The western 'Stans' are made up of sparsely populated plains, where life passes slowly and adventure travellers can turn back the clock amongst nomads whose lifestyle hasn't changed for centuries. Uzbekistan in particular is a country of incredible architecture, unique cultures and a fascinating history which spans the centuries. Here you can truly take a step back in time and immerse yourself in the Uzbek culture, marvel at the modern architecture in Tashket, shop for souvenirs in ancient Samarkand and experience a country like no other. 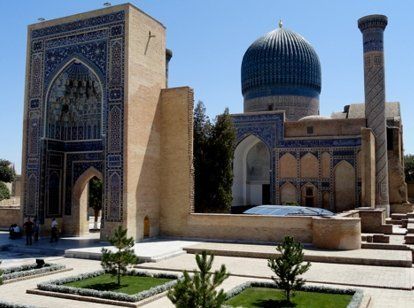 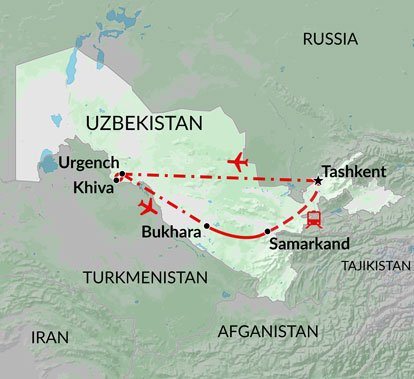 Is it safe to visit Uzbekistan?

Uzbekistan is a pretty safe country and the political situation is stable. The country is landlocked and most of its border areas are not safe to visit. You should avoid visiting the areas bordering Afghanistan, Tajikistan, Tajik, Kyrgyz and Kyrgyzstan.

What is the official currency of Uzbekistan

The currency used in Uzbekistan is the Uzbekistani so'm (UZS), which is subdivided into 100 tiyin.

When is the best time of the year to visit Uzbekistan?

The best time to visit Uzbekistan is during spring and autumn (April to May, and September to early November). The weather is dry and warm, and you can explore the desert without the scorching temperatures.

What should you wear in Uzbekistan?

Wearing light, loose-fitting clothing in the summer is recommended. Shorts are not appropriate for either men or women. Women should also cover up their legs and shoulders in conservative, rural areas.

Can you drink the tap water in Uzbekistan?

The tap water is not safe for drinking in Uzbekistan unless it has been boiled. Bottled water is available throughout the country.

Consisting of 12 provinces, Uzbekistan is a sovereign state with a secular, unitary constitutional republic. In ancient times, Uzbekistan was the Iranian-speaking region of Transoxiana. The culture of the country is varied as a result of its diverse history and strategic location.

The major language spoken in Uzbekistan is Uzbek - a Turkic language written in the Latin alphabet. Russian is used as a governmental language and is the most widely taught second language. The main religion practised in the country is Islam, followed by Russian Orthodox Christianity.

The economy of Uzbekistan is in a gradual transition to the market economy. The country is a major producer and exporter of cotton. It also operates the largest open-pit gold mine in the world. With a vast supply of natural gas and

power generation facilities of the Soviet era, the country has become the largest electricity producer in Central Asia.

The climate of Uzbekistan is continental, with little precipitation expected annually. The Aral Sea is the fourth largest inland sea on Earth and plays a role in affecting the air moisture and arid land. Majority of the country's water resources are used for farming.