Five photos that will make you want to travel to India 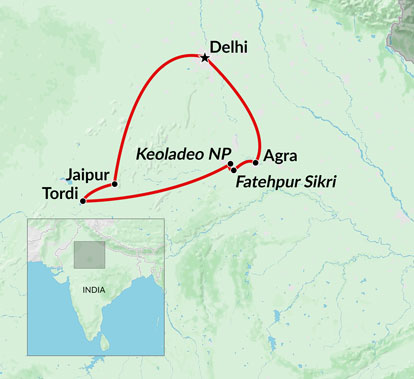 This 9-day India tour is the perfect introduction to this fascinating country, covering the iconic 'Golden Triangle' of Delhi, Agra and Jaipur with additional stops at Keoladeo National Park and the Rajasthan village of Tordi. 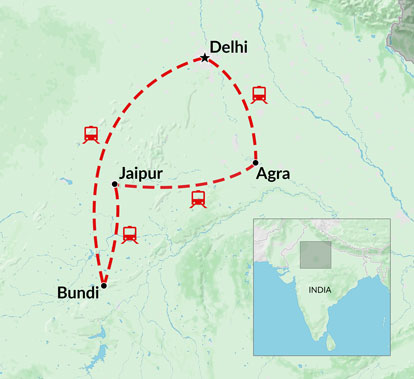 This budget India tour takes in Delhi, Jaipur and Agra as well as the Rajasthani town of Bundi. Travel is mainly by train, with some included tours mixed with free time for independent exploration or to take an optional local tour 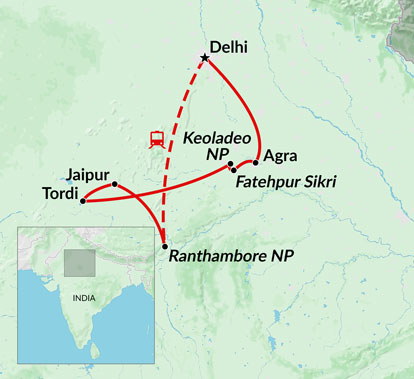 There are very few places in the world that can carve a deep, lasting impression on a traveller, and there are even fewer parts of the world that when once visited will never leave your heart & India is one of these places.

Sitting upon layers of history, there is perhaps no other country in the world that is home to such marked contrasts as India is.

An India tour is full of the unexpected but one things certain: you wont return home quite the same after the adventure, it's colourful, chaotic, and noisy but there is beauty everywhere, especially in its people.

Here are five photos that will make you want to travel to India.

The Taj Mahal's creator, Emperor Shah Jahan, said it made 'the sun and the moon shed tears from their eyes'.

Every year, tourists by the dozens - more than twice the population of Agra - pass through the gates of the great Taj Mahal to catch a once-in-a-lifetime glimpse of what is widely considered the most beautiful building in the world - very few leave disappointed.

As the years go by from when the Taj Mahal was constructed in 1632 for Shah Jahan's favourite wife who died of childbirth, it looks nearly as immaculate today as it did back then.

Completely off the tourist trail, the area is also famous for its red-sandstone quarries and its resin bangles. This holy city offers travellers an atmosphere of quiet rural ambience with warmth and friendly hospitality.

Places worth visiting include the old city palace, a lake which has boating facilities, temples of Madan Mohanji and Kalyanji - It is said that the Kalyan Ji and the Madan Mohan Ji Temple were the brainchildren of Maharaja Dharma Gopal.

The romantic city of Udaipur

The former glory of Mewar sits amongst dazzling lakes that sparkle under the sun's striking beams. The emanating timeless beauty that runs along the sheer lines of its rustic past, Udaipur, is undoubtedly the crowning city of Rajasthan.

Also known as the Venice of the East, the city of lakes and one of India's most romantic destinations - with its well-preserved palaces, temples it's easy to understand why Udaipur has been described in these terms.

Founded in 1559 by Maharaja Udai Singh, Udaipur became the final capital of the Rajput kingdom of Mewar. Today, it is a shining example of heritage tourism in India. Whether navigating ancient, winding streets, bargaining in bazaars, or taking a sunset boat ride on pretty Lake Pichola, Udaipur is a tough city to get bored in!

Located in the Sawai Madhopur district of eastern Rajasthan (130 km from Jaipur) you'll find the Ranthambhore National Park that has quickly become one of the world's best destinations for a safari to see tigers.

Tiger sighting in India is a worthwhile experience that should be grabbed with both hands if the opportunity arises! All-year-round wildlife enthusiasts travel to India from one wildlife reserve to another to get the majestic glimpses of the ferocious tigers.

Meenakshi Amman Temple, also known as Minakshi-Sundareshwara Temple, is one of the oldest and most important temples in India - dating back as far as 2,500 years! The temple complex covers 14 acres and has 4,500 pillars and 14 towers!

Today, it is believed that more than 20 000 people visit the Meenakshi Temple's every day. Bordered by high walls and gateways, it is a bewildering collection of indoor and outdoor spaces: small, cramped shrines, vast halls, low and high ceilings, darkness, light. Hustle and bustle, quiet spaces, and chaos. All told, it contains around 30,000 sculptures.

The temple has a great mythological and historical significance. It is believed that Lord Shiva assumed the form of Sundareswarar (the handsome one) and married Parvati (Meenakshi) at the site where the temple is currently located.

The Palace of Mirrors, Sheesh Mahal

Often referred to as the palace of mirrors, Sheesh Mahal is one of the most alluring and magnificent structures in Patiala, India. Adorned with great art and architectural value, the palace will remind you of the grandeur of Kings and Maharajas of Punjab and their lavish lifestyle.

The palace was built by Maharaja Narinder Singh in the year 1845 to 1862 behind the main Moti Bagh Palace. The architecture of the palace is an amalgamation of both the Mughal and European styles.

The palace was a presidential palace which was made in a forest with an artificial lake, fountains, gardens, and a suspension bridge which is a replica of Laxman Jhula in Rishikesh.

Known for its spectacular works of art and architecture, it is also home to various paintings and sculptures, Sheesh Mahal is built in a fancy setting with an artificial lake, bridge, fountains, and gardens.

Palace of the Winds

It is believed that the 953 windows covering the lace-like facade of the Palace of the Winds were designed to allow the woman of the royal court to watch the drama of the streets unobserved.

Known as Hawa Mahal in Hindi, the Palace of the Winds was constructed in 1799 for Maharaja Sawai Pratap Singh as part of the women's section of the enormous City Palace at the centre of Jaipur.

The Palace of the Winds is considered one of the finest examples of Rajput architecture in India - pictures don't do it justice!

The glorious Palace of the Winds always welcomes its visitors with open arms, graciously tempting them to fall in love with her colourful spirit, charm, and the rich history this palace has to offer. She never fails.

Varanasi is the India of your imagination. It is also known as Kashi and Benaras, is the cultural capital of India - a melting pot, where both death and life come together. This is one of the world's oldest continually inhabited cities, and one of the holiest in Hinduism.

Varanasi has the finest river frontage in India, with miles of ghats, or steps, for religious bathing; an array of shrines, temples, and palaces rises tier on tier from the water's edge.

The sacred city is bounded by a road known as Panchakosi; devout Hindus hope to walk that road and visit the city once in a lifetime and, if possible, to die there in old age - it's believed that anyone who dies in Varanasi will be liberated from the cycle of reincarnation. Even a wash in the Ganges River is said to cleanse away all sins.

Jaipur, the pink and magnificent city of India, is home to royal palaces and historic forts, rich in tradition, famous for its food and host to one of the biggest literary festivals in the country.

At the city's heart, the City Palace continues to house the former royal family; the Jantar Mantar, the royal observatory, maintains a heavenly aspect; and the honeycomb Hawa Mahal gazes on the bazaar below. And just out of sight, in the hill country surrounding the city, is the fairy-tale grandeur of Amber Fort, Jaipur's star attraction.

As a tourist or a newbie in the city, it is always considered to explore the city like a local.

The jovial and dramatic Festival of Colours - Holi Festival. What originated as a Hindu festival in India has quickly gained global attention and is now celebrated around the world.

But, the fact remains, absolutely nothing beats celebrating this colourful and truly unforgettable occasion in its original birthplace on the Indian subcontinent.

Holi is a vibrant, energetic and multi-coloured two-day celebration of love, colour and fertility that takes place every year in February/March.

Not only does it mark the official arrival of spring, but it also commemorates the enduring love between Lord Krishna and Radha.

In a grand display of the joy of good over evil, enormous crowds of revellers toss a mixture of rainbow-coloured powders into the air, which coats everyone in a magical, dazzling glow. The mood is lively and upbeat, and the smiles and laughter are undeniably contagious - it's one for the books!