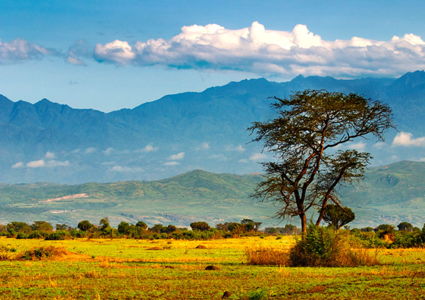 The National Park covers an area of approximately 1978km² and was named after Queen Elizabeth II to commemorate her visit in 1954.

The Park is known for its wildlife; over 90 species of mammal and in excess of 600 bird species live within the park perimeter, among these are Elephants, Leopards, Hippopotamus, Jackal, Hyena and Lions. Ten primate species are present within the park; these include Chimpanzees, Baboons, Red Tailed, Blue, Vervet and L’Hoest’s monkeys.

For those looking for a real taste of Tarzan’s territory then Kyambura Gorge is where you should head. Kyambura is located on the parks north-eastern boundary and is covered by thick treetop canopies and comes complete with a community of Chimpanzees who can often be seen crashing through the high trees.

The remote Ishasha planes in the south west of Queen Elizabeth are home to the parks famous tree climbing lions. There are currently around 40 lions living in this area which are split over 3 prides.

Bird Watchers are made to feel at home at Queen Elizabeth, the park is home to over 600 species of bird including some rare an unusual specimens such as the enormous ‘Whale-headed Stork’ standing at over 1 metre in height.

We visit Queen Elizabeth on our Primates of Uganda tour and can also include it in many of our tailor-made itineraries.