Top 10 things to do in Kathmandu 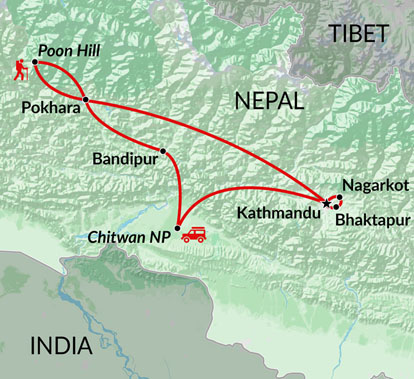 This comprehensive tour takes you on a journey across one of the most spectacularly beautiful countries in the world. Amazing mountain scenery mixed with lush, wildlife rich jungles, ancient hilltop villages & bustling Kathmandu. 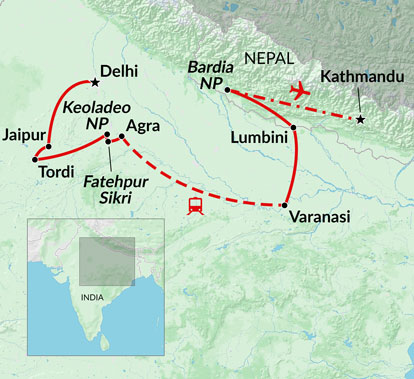 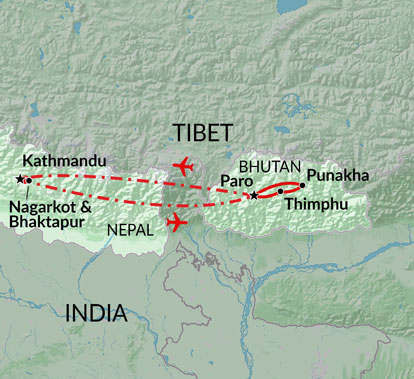 This compact tour gives a taste of both Bhutan and the Kathmandu Valley and is a great way to see Bhutan if you only have a short time available. We'll explore temples, villages, enjoy hilltop mountain views and tasty local meals.

Kathmandu is its heaving, atmospheric capital city, located within a valley surrounded by the towering peaks of the Himalayas.

This sprawling city is rich with history and culture, and there is always something new to explore. We've chosen our top ten attractions in Kathmandu, qhich you can experience on our Nepal tours.

This is one of Kathmandu's must-visit destinations. It is a key attraction of the city and is a UNESCO World Heritage Site. It consists of a large square that reverberates with history and culture. In the square, you will find old royal palaces, Hindu and Buddhist temples and shrines, courtyards, ponds, and statues. The presence of vendors and religious Hindu men (sadhus) adds to the vibrant atmosphere. The artwork and architecture of the ancient buildings are visually stunning and make for great photos.

Swayambhunath, or the Monkey Temple, is another of Kathmandu's most famous and iconic attractions. It is one of the holiest stupas in Buddhism, and incorporates both Hindu and Buddhist architecture. The temple itself is beautiful, with large white domes and gilded stupas. The temple is set atop a hill, with 365 stone steps leading up to it. While this might sound like a lot, the view from the top is worth it! You are treated to a magnificent 360-degree vista of the surrounding valley. As the temple's nickname attests, monkeys are common in the temple's vicinity.

The Kathesimbhu Stupa is essentially a smaller version of the Swayambhunath. It is found in the old city and dates back to around 1650. It was built in order to allow those who aren't able to get to the Swayambhunath, such as the sick or elderly, to be able to visit a smaller temple closer to the old city. It is located within a hidden courtyard, and, like the Monkey Temple, it features a white dome with golden stupas.

The Boudhanath Stupa is found in an area called Little Tibet, because there are many Tibetans residing in the area. The temple is also designed in a Tibetan Buddhist style. It is one of the largest stupas in the whole of Nepal. It is a UNESCO World Heritage Site and attracts thousands of Buddhist pilgrims every day. The stupa is so enormous, that it is permitted for people to walk on its white dome. It is adorned with prayer flags that drape down from the top of the gilded tower, at the base of which are painted the eyes of the Buddha. The spiritual atmosphere is enhanced by the presence of devotees spinning their prayer wheels and monks chanting their mantras. In the surrounding area, you will find the Guru Lhakhan Gompa, an ancient monastery, as well as restaurants and cafes. There are lovely views of the stupa from their rooftops.

This temple is found on the banks of the Bagmati River, which is considered to be sacred. It is a Hindu Temple. It is dedicated to the god Shiva, and is one of the four most important religious sites for followers of this deity. It features a gilded roof with silver sides, and beautiful wooden carvings. Similar to the practices that are done at the Ganges River in India, here the bodies of loved ones are cremated and their ashes scattered down the river. It is done so with the belief that the person may be reincarnated as a human or maybe reach Nirvana. In spring, this temple is the site of the Maha Shivaratri festival that attracts Hindu pilgrims in numbers.

Visit the Garden of Dreams

The Garden of Dreams is also called the Garden of Six Seasons and was built in 1920. It offers a peaceful and tranquil experience that is different from the more bustling atmosphere of Kathmandu's other attractions. The entire complex is 6895 square metres in size; comprising gardens, ponds, pavilions, shaded walkways, and fountains. There is also a grass-covered amphitheatre. The gardens lay in a state of neglect for many years and have now been beautifully restored.

The Thamel Market of Kathmandu is more of a neighbourhood than a market. It features narrow streets lined with a wonderful variety of places to see and explore. You will find everything from restaurants and tea shops, to bookstores and art dealers, to music stores and stores selling hiking equipment. There are even places offerings classes and workshops for things like traditional cooking, painting, and woodcarving. The nightlife is also very vibrant!

Nepal might be famous nature-wise for Mount Everest and the spectacular Himalayas, but there is more to it than that. Whitewater rafting is an ideal activity for adrenaline junkies, and offers stunning natural scenery to boot. Monsoon rains occur annually in Nepal, and these result in spectacular rapids and waterfalls on the rivers (rafting can also be done out of the monsoon season). Expeditions and trips are on offer for varying lengths and degrees of expertise. When in Kathmandu, the Bhote Kose River is the place to head to for whitewater rafting. Further afield, the Trishuli River is also a popular rafting destination.

Climbing the world's highest mountain may be on many people's bucket lists, but it isn't as widely known that you can get another thrilling perspective of Everest. If your budget allows, try out an aerial Everest flight- this is a unique, once-in-a-lifetime opportunity to see the most famous peak in the world from above. Cruising in and above the clouds, you are treated to breathtaking views of the snowy slopes of Everest and its neighbours. Some companies offer helicopter flights as well. Opt to do a guided flight where the narrator will explain the significance of the Himalayas, which are sacred in this part of the world.

Changu Narayan is an ancient temple set atop a hill about 12km east of Kathmandu. It is a Hindu temple dedicated to Vishnu, the preserver god in Hinduism. It features many carvings depicting the ten different incarnations of Vishnu, and also features shrines to other Hindu gods within the complex. Changu Narayan dates back to the fourth century, and is believed to be the oldest temple in the Kathmandu Valley that is still in use today. It is constructed in a pagoda two-tier style, with beautiful ornate carvings, statues, and artwork.