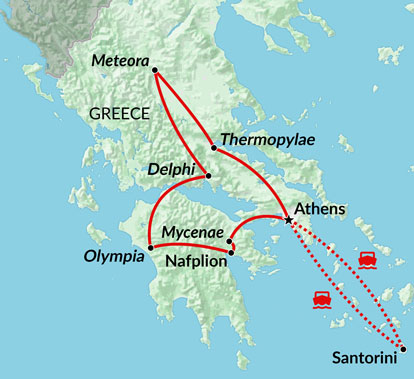 This great 10-day tour perfectly combines classic Greece, including visits to Athens, Mycenae, Olympia & Delphi, with the clifftop monasteries at Meteora and the scenic beaches & villages of the volcanic island of Santorini 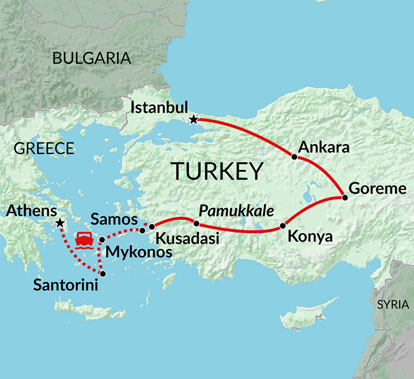 This tour combines ancient Athens and visits to Greece's beautiful Aegean islands with some of Turkey's most impressive and important highlights, including Ephesus, Cappadocia and Istanbul. 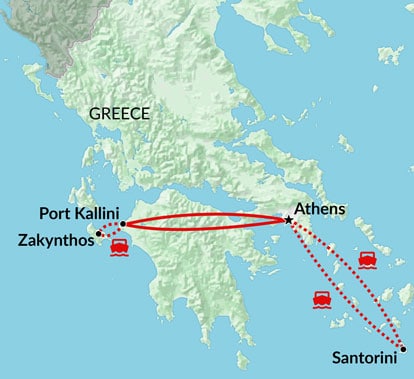 This week-long tour of Greece combines the ancient wonders of Athens, including the Acropolis and Parthenon with the islands delights of Zakynthos and Santorini.

Greece is known the world over for being the founders of democracy and philosophy, the creators of the Olympics and some of the greatest minds of human history, but many people don't think of Greece as an island nation, when in fact the country has over 6000 islands, 227 of which are inhabited today.

With so many islands, Greece really can offer something for everyone and here at Encounters Travel, we've selected a few of our favourite islands to feature in our group tours, though of course, we can take you to any of the Greek islands if you are looking to book one of our customised private tours or extensions.

On our customised tours we love to feature the island of Crete, whose history is hard to rival.

Here is a handy traveller's guide to exploring the island of Santorini.

When you hear the word Santorini, let me guess, you conjure up images of whitewashed hillside villages, stunning sunsets, and fantastic beaches, right? If you did, then you are right Santorini has all of that, but did you know that this little island has so much more to offer?

One of my favourite places to visit in Santorini are the incredible ruins of Ancient Akrotiri. The Bronze Age settlement was destroyed by a volcano in the 16th Century BC, though after extensive excavations, you can step back in time and walk the same streets the ancient Greeks once walked along.

Akrotiri can be accessed easily from the main town of Fira, public buses leave regularly to the Red Beach which is just a short walk from the archaeological site. Of course, if you are travelling on one of our tours, we will offer you an option to visit this incredible place.

Yes, you did read that right. Santorini is in fact built on the rim of a volcano, the very same volcano which was responsible for the destruction of Ancient Akrotiri in the 16th century BC (don't worry though, this was the last major eruption).

To really appreciate the fact that you are visiting a volcano, I'd highly recommend taking one of many boat trips where you'll sail across the Santorini Caldera (the flooded crater) and soak in the islands volcanic hot springs.

The volcanic beaches of Santorini

You'll be spoiled for choice when it comes to beaches in Santorini, though due to the nature of the island, the beaches here are composed of volcanic sand and pebbles.

Probably the most famous beach in Santorini is the Red Beach, though it is often busy due to the small size of the beach. It's still worth a visit though, even just for a photo opportunity as the red and black rocks are like nowhere else!

Whilst here, do pop to the next cove to visit the White Beach with its white cliffs, which gives a great contrast to the Red Beach.

Next on our list of favourite beaches is Kamari. The beach has black sand and on the left side of the beach is a huge rock known as Mesa Vouno.

The area around Kamari beach has more of a party feel with many bars, clubs and restaurants.

Where to stay in Santorini

As one of the most 'famous' islands in Greece, it won't be a surprise to learn that Santorini has some of the most stylish and unique boutique hotels in the country.

My recommendation would be one of the many villages which strewn the west coast of the island. If like me, you've been entranced by beautiful coastal sunset photos of the island, chances are that these would have been taken from one of many hilltop viewpoints on the west coast. From this side of the island, you are rewarded with some of the best views of the Santorini Caldera.

My personal recommendation would be the little town of Oia on the North West tip of the Island. The town offers outstanding views, iconic whitewashed buildings and some fantastic accommodation choices, including a number of boutique cave hotels, where rooms are tucked into the cliffs.

What to eat in Santorini

Often forgotten when talking about Santorini is its world-class food and drink scene. I mean it is Greek, so the food here is bound to be delicious!

You can't leave the island without eating in one of the many restaurants which you'll find dotted around the caldera cliffs, most of which offer views of the Aegean Sea - a great choice for a sunset meal.

During the day, you definitely should try some traditional Greek food in one of the nice tavernas which can be found by the sea in Perissa, Kamari and Akrotiri to name but a few.

For those looking for nightlife, Santorini has plenty to offer you too. The capital of the island Fira is where you'll find the most exciting nightlife on the island, you'll be spoiled for choice with a wide range of bars and clubs to choose from.

Despite being a small island of just over 76km, Santorini boasts no less than 18 wineries, making it a perfect place for wine lovers. The island cultivates nine native grape varieties, the most famous being the Assyrtiko. Traces of the Assyrtiko wine were even found buried in the ruins of Akrotiri... it must be good if it's been around that long!

How to get to Santorini?

Due to its popularity, getting to Santorini has never been easier. The quickest way to reach the island is of course by flight.

The island has an international airport with great worldwide connections, and of course, there are plenty of flights operating from the Greek mainland and other islands too. Ryanair, Volotea, Sky Express and Olympic Airlines all offer direct flights from Athens to Santorini, often at low cost.

Whilst flying is the quickest way to reach the island, it's not the most interesting. I'd highly recommend taking the ferry to Santorini which departs from Piraeus (a short metro ride from central Athens) and arrives into Fira between five and eight hours later.