5 Temples to visit in Egypt 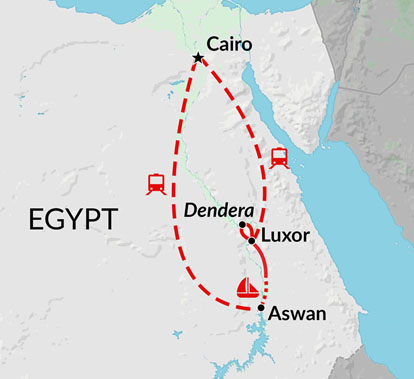 Thousands of years ago, Egyptian temples were constructed for the official worship of gods and to honour the reigning pharaohs in Ancient Egypt. The gods were thought to reside within these sanctuaries and the Egyptians would perform rituals and give offerings.

Today, Egyptologists continue to study the surviving temples dispersed across the country and they have become world-famous tourist attractions.

This towering complex is a major highlight of our itinerary and for good reason. Built during the reign of the pharaoh Ramses II, these temples were designed to reflect the power and authority of Ramses II and to impress Egypt's neighbours in the south.

The complex was fully completed in 1244 B.C.E. and looks out across Lake Nasser. Four enormous statues of Ramses II rest in front of the main temples and are striking works of Ancient Egyptian art.

Six rock temples were constructed in the Nubian region throughout the reign of Ramses II, but the Abu Simbel Temples are by far the most impressive. This UNESCO World Heritage Site was cut into a solid rock cliff and covered in artwork and hiergoplyphics.

As a result of the construction of the nearby Aswan Dam, the complex was in danger of being destroyed by rising waters. A team of international engineers relocated the temples to save them.

We offer a special Egypt tour that is timed to overlap with the Abu Simbel Festival. This festival takes place twice a year, on the 22nd of February (the anniversary of Ramses' accession to the throne) and the 22nd of October (his birthday).

On these set days as the sun rises in the morning, the internal chambers of the temples are lit up. The light also illuminates three of the four large statues, apart from the god of darkness, Ptah.

This unique 9-day Egypt tour will transport you to the temples in time to witness this incredible event. When the sun has risen, the festival carries on outside and you can wander around markets, try local dishes and experience traditional dancing and music.

Located on Agilkia Island, the temple complex of Philae is one of the most noteworthy archeological sites in Aswan. We will stop over in the city of Aswan on many of our Egypt tours and also set sail on our felucca cruises from the Aswan harbour. The original complex was discovered on Philae Island, but it was dismantled and moved to the Agilkia Island due to rising waters. This venture was part of the UNESCO Nubia Campaign project, which was created to help protect many other complexes in the region.

The complex can only be reached by boat and our Egypt tours will venture into the reservoir of Aswan so you can see the temples up close. The Agilkia Island is enclosed by lush greenery and is a sight to behold with the looming structures sitting on the water's edge. Your local guide will show you around and tell you interesting facts like the word Philae is Greek for 'the end'.

The Ancient Egyptians originally built the main temple for the goddess of Isis, one of the most important deities in the Egyptian world. The name Isis is the Greek form of an Ancient Egyptian word for 'throne'. Isis was the Egyptian goddess of marriage, motherhood, magic, fertility and medicine. This temple is one of the greatest in Egypt and covers about a quarter of the island.

Historians believe that this centre point of worship was used during the Ptolemaic period of Ancient Egypt. Given all of the different structures on the island, it was thought that the total time of construction could have taken 800 years. The original island of Philae was home to priests and workingmen, including the carpenters and stonemasons that helped construct the temples and monuments.

The mortuary temple of Hatshepsut also know as Djeser-Djeseru is a mortuary temple dating back to ancient times in Upper Egypt. The temple was constructed for the 18th Dynasty pharaoh Hatshepsut and lies under the cliffs at Deir el-Bahari on the west bank of the Nile. Our Egypt tour will visit this temple and many others during our stay in Luxor.

Erected near the Valley of the Kings, this remarkable shrine is dedicated to Amun (an Egyptian deity) and Hatshepsut by the mortuary temple of Mentuhotep II. Over the years, the temple has been restored to its former glory and the Polish Academy of Sciences in Warsaw was responsible for the refurbishment of three levels.

Hatshepsut was one of the most notable women in ancient times and after the death of her husband, Thutmose II, she served as a co-regent to her nephew and stepson. It is thought that the temple took 15 years to be completed. One of the temple's most striking features is the 'Punt colonnade' on the left side of the ramp. This colonnade tells the story of Hatshepsut's journey and successful trade expedition to Punt.

Carved into the craggy limestone cliffs, this dramatic monument was inspired by the design of the temple of Mentuhotep II. Your guide will also point out how these two temples differ as Hatshepsut's Temple has a lengthier colonnaded terrace. In the past, the terraces were encircled by verdant gardens with foreign plants and trees. The structure of the temple is considered to be the closest Egypt came to Classical architecture.

This vast complex of pylons, sanctuaries and obelisks was dedicated to the Theban triad - three Egyptian gods that were the most popular in the area of Thebes. The trio consisted of Amun, his consort Mut and their son Khonsu. The complex was also constructed to pay homage to the greater glory of Egyptian gods.

In the centre of the complex, you can find the Amun Temple, which was seen as the early 'home' of the local god. On your Egypt tour, your guide will lead you through this iconic place of worship and show you temples of interest. The Amun-Ra Temple is one of the largest religious complexes in the world and is renowned for its hypostyle hall and assortment of papyrus-shaped columns.

The building of the construction began during the reign of Senusret I in the Middle Kingdom and continued into the Ptolemaic period, although some of the buildings are from the New Kingdom. You will notice that the further you go into the complex, the older the structures are. The complex is a large open site and also includes the Karnak Open Air Museum.

Karnak is believed to be the second most visited historical site in Egypt, after the pyramids at Giza. The area is split into four main parts and only the largest is open to the public. Our Egypt tours offer the option to enjoy a hot air balloon ride over the city of Luxor and the ancient sites below. This is the perfect way to take in all of the historical wonders and to see them from above.

This eye-catching double temple sits by the Nile in the town of Kom Ombo in Aswan Governorate, Upper Egypt. The structure was built in the Ptolemaic dynasty. Later in the Roman period, further additions were made. This shrine stands out from the others given its 'double' design with courts, rooms and halls for two sets of gods.

As part of our Egypt tours, we will float down the Nile on feluccas (traditional wooden sailboats). You will pass by many temples and monuments built alongside the riverbanks with Kom Ombo being one of the most picturesque. Your expert guide will take you into the halls, chambers and passages, lined with interesting ancient scenes.

The temples have been destroyed over the years by the waters of the Nile, earthquakes and people using the stone for other projects. Outside of the temples, you will see a path leading to the newly added Crocodile Museum. In this air-conditioned gallery, you can find over 300 mummified crocodiles and ancient statues on display.