As Glamorous as Casablanca 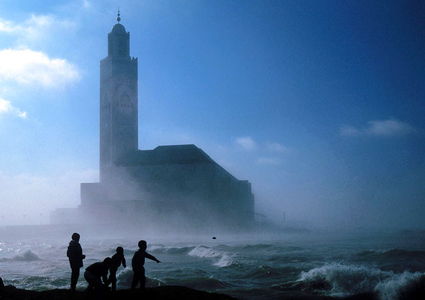 No one expected it to be anything out of the ordinary; it was one of hundreds of Hollywood movies released in 1943. But its characters, dialogue and music became iconic, and Casablanca grew to be the black and white classic, often ranking near the top of all those ‘greatest’ lists. Cinema supercharged the thought of the city of Casablanca so glamorously, it makes today’s statistics like – ‘it’s Morocco’s largest city’ and ‘it’s industrious with the world’s largest artificial port’ – comparatively dull.

No wonder tourists rush to Rick’s Café at 248 Rue Sour Jdid. This upmarket restaurant is a recreation of Humphrey Bogart’s movie nightclub. It’s set within the walls of the Old Medina (City) that borders the Atlantic Ocean. The menu is excellent, though expensive, and offers choices fresh from the Atlantic, including Swordfish Steak and American Crab Louis. Then there are the cocktails – so great here, of all the gin-joints in the world.

After the earthquake of 1755, the Sultan of Morocco rebuilt the Portuguese colony city of ad-D?r al-Bay??. Over a century later it was renamed ‘Casa Blanca’ (‘White House’) by the Spanish who were ‘protecting’ Moroccan coasts and ports. The French occupied Casablanca in 1907, and had the rest of inland Morocco ‘protected’ by 1912. Nationalist uproar finally pushed the country to independence in 1956.

Casablanca is very laidback, and the locals are sincere and friendly. The city’s King Hassan II Mosque is the largest in Morocco and the 2nd largest in the world (after the Grand Mosque in Mecca). French designed with Moorish influences, it was built on reclaimed land – almost half of it is over the Atlantic – and part of its expanse of flooring is ocean-viewing glass. The Mosque was built between 1986 and 1993. Its granite, plaster, marble and wood were sourced in Morocco, with the exception of its Italian granite columns and glass chandeliers. Moroccan artisans produced the Mosque’s beautiful mosaics, stone and marble floors and columns, plaster mouldings and carved wooden ceilings.

Casablanca is vibrant and trendy with a happening nightlife. In and around the traditional Old Medina-walls are souqs (markets) selling shoes, clothing, pottery, locally-made leather goods, hookah pipes and an array of nuts, dates, herbs and spices, and fruit – including the delicious little jujube (red date). Vegetables are abundant, so are dead or alive chickens, other fine meats and delicious Moroccan cakes and sweets.

North African arts and crafts are best sourced in the Habbous District. Foodies should definitely walk through Central Market to take in the atmosphere and consider buying something local. Its stallholders love negotiating, so get the hang of some Arabic ‘marketing’ words to prevent paying over the odds!  F. Kabbaj is well worth a visit, where among other delicacies you can sample the local foie gras. And near El Maarif, enjoy a coffee at Sky 28 – the views are as glamorous as Casablanca.

Check out or Morocco Tours here or email tours@encounterstravel.com.