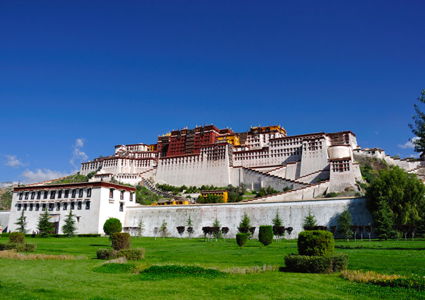 Tibet is a fascinating and culturally rich holiday destination, which attracts numerous visitors every year. Whether it’s for the excellent trekking in the mountains – in particular to Everest Base Camp – or wildlife viewing in the national parks, or just to take in the breathtaking scenery and long cultural history that this region has to offer, it’s easy to create a holiday with a difference. Below is a little insight into some of the more popular places to visit on any private or tailor-made trip to Tibet.

Lhasa is the capital of Tibet although much of has been replaced by Chinese developments after the invasion in 1950 although there are still some parts of old Lhasa which remain very typically Tibetan with many street vendors and local cafes serving traditional Tibetan food. There are three main sites of interest in Lhasa and these all relate to the religion and history of Tibet. The Potala Palace, perched upon the Marpo Ri Hill 130 meters above the Lhasa valley, is the most famous and striking structure in Tibet. It was built in the 17th century and was once home of the leaders of the Gelukpa sect of Tibetan Buddhism, the Dalai Lamas, as well as being one of the main religious pilgrimage sites. The other main sites of interest in Lhasa are the Jokhang Temple & Barkhor Street and Norbulingka which was built as a summer palace in the woods outside of Lhasa.

This is the fourth largest city in Tibet and once a major centre for trade with India is where the world famous Gyantse Kumbum is located. This is a magnificent 8 storey structure with an impressive crown-like golden dome which dominates the city. Also worth a visit here is the Gyantse Dzong. It is a long steep climb to the top but the views over the city are well worth it.

Is the second largest city in Tibet with a population of 50,000 and is a busy trading and administrative centre. As you drive into the city the Xigatse Fortress set high on a hillside dominates the town, however most of the fort is a ruin but some re-construction did take place in 2007. However the Tashilhunpo Monastery in the west of the town is the main attraction. Xigatse has been the seat of the Panchen Lamas and the monastery constructed in 1447 is where they resided. The monastery houses the world’s largest gilded statue a impressive 26 metre high figure of the Maitreya Buddha. The statue was built in 1914 and took 900 workers some four years to complete. There is said to be 300kg of gold in the gilding which is also studded with precious stones.

This Mountain is considered holy by Hindus, Buddhists and Jains. It is also worshipped by the ancient Bon religion of Tibet as it is said that this is where Bonpo the founder of the religion landed when he came from the sky. In ancient texts, it is referred to as the centre of the world. The reason can be understood from the geographical significance of its location. Four of the great rivers of the Indian Subcontinent originate here, the Karnali which feeds into the Ganges, the Indus, the Sutlej and the Brahmaputra. The mountain is know in Tibetan as Kang Rinpoche or ‘Precious Jewel of the Snow’. No one has ever climbed to the peak of Mt Kailash but most adventures do the pilgrimage trek around the base of the mountain which takes around 3 days.

The Qomolangma nature reserve was established in 1989 by the government to conserve the natural heritage of the Mt Everest region in Tibet. The Tibetan approach to Everest provides better vistas than those on the Nepal side and access is also a lot easier as there is a road all the way up to the base camp here although it is not possible to drive all the way to base camp. The Rongphu Monastery is located at the foot of the glaciers on north face of Mt Jomolangma and is the highest monastery in the world.

The Yarlong river runs for 2,000 km across Tibet, then flows into India where it is known as the Bramhaputra. The region is one of the world’s least explored areas and is home to king cobra, leopards, red pandas, musk deer, monkeys and tigers. The park is centred around the huge gorge that the river runs through and this is reputed to be the deepest canyon on earth. At its deepest point it records a depth of 5,382m which is almost three times the depth of the Grand Canyon.

This is one of the three largest sacred lakes in Tibet. It is over 72 km long and is surrounded by snow capped mountains. Lakes are considered sacred as it is thought they are the dwelling places of deities and therefore is a site of pilgrimage for Buddhists. The lake is home to the famous Samding Monastery which is on a peninsula jutting into the lake. This monastery is the only Tibetan monastery to be headed by a female re-incarnation. Since it is not a nunnery, its female abbot heads a community of about thirty monks and nuns. Samding Monastery is where the only female Lama in Tibet, stayed and presided.