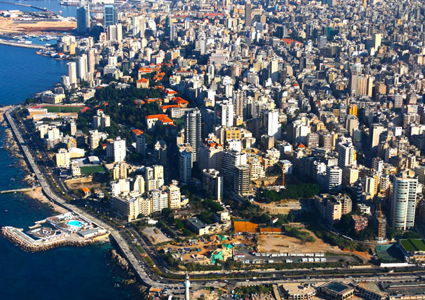 Beirut is the capital of Lebanon and has a population of approximately 2.1 million. The city has a history dating back more than 5000 years and has been under the rule of many empires. Excavations in the city have unearthed signs of Phoenician, Hellenistic, Roman, Arab and Ottoman civilisations.

At the end of World War II, the country of Lebanon was granted independence from France and Beirut became the countries capital. In the years following independence, the country, and especially Beirut began thriving as a top tourist destination for travellers from around the world. During this time, because of its unique geographical location, climate and culture, the city became known as the gateway to the Middle East.

Beirut alone, is home to over 10 recognised religions and in 1975 a brutal civil war between Christian and Muslim factions broke out which ravaged almost all of Beirut. The countries conflict lasted almost 15 years and in this time the former commercial centre of Beirut became a no mans land. The civil war ended in 1989 and since then the government have encouraged aggressive redevelopment to hopefully regain its rightful place as one of the Middle East’s top tourist destinations.

Modern day Beirut is very cosmopolitan and you will often see local people in designer and very fashionable clothes. The nightlife here is also world class and dressing to impress is a must! Shorts are generally shunned by Beiruti men in favour of more fashionable and stylish clothes (even when the weather is very hot).

Pigeon Rock – This is a colossal natural arch which juts up from the Mediterranean – The nearby rocks and cliffs provide an excellent view-point to watch the sun go down.

Place de l’Etoile – Located in the very centre of the Downtown District – This area was originally build by the French at the beginning of the 20th century. The area suffered greatly during the war, however it has recently been restored.

Jeita Grotto – This area is located 20km north of Beirut in the Nahr al-Kalb valley. The Grotto consists of 2 interconnected caves which span a length of almost 9 kilometers. The lower of the two caves has been inhabited since pre-historic times; however it wasn’t re-discovered until 1836. The lower cave can only be visited by boat as it channels an underground river which provides fresh drinking water to over a million Lebanese.
In 1958, Lebanese specialist discovered the upper galleries which are situated 200ft above the lower cave. To make access easier for tourists, an access tunnel and a series of walkways have been constructed. The upper galleries are home to the world largest Stalactite.

National Museum of Beirut – The national museum is Lebanon’s principal museum of archaeology. The museum began the collection after World War I and was officially opened in 1942. The collection consists of over 100,000 items and around 1300 of these, are currently being exhibited. During the civil war the museum stood right at the front line which separated the warring factions. The Egyptian revival wing was damaged extensively; however the majority of the artefacts were saved at the last minute. The museum has now been fully restored. The museum displays its collection in chronological order with exhibits from; the pre-historical period, Bronze Age, Iron Age, Hellenistic period, Roman period, Byzantine period, Arab conquest and the Mamluk period.

Scuba Diving – With 36 shipwrecks, canyons, impressive walls, caves, ray and shark habitats, Beirut certainly has something to offer every level of diver. Many hotels offer a Dive School, however if you would like to pre-book some diving in Beirut, please let our UK know and they can provide you with suggestions and prices.

Burj Hammoud – This is Beirut’s Armenian Quarter and it is the perfect place to shop for reasonably prices bric-a-brac, crafts and souvenirs. Don’t forget to haggle!