Sigiriya – palace in the sky 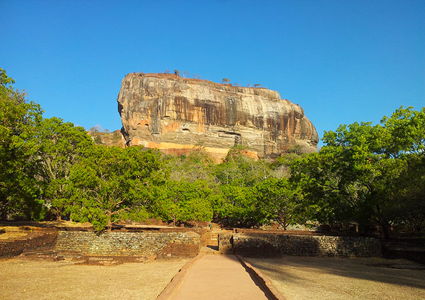 Also known as ‘Lion Mountain’, the imposing rock fortress of Sigiriya rises 200 metres over the surrounding plains and is one of Sri Lanka’s most awe-inspiring archaeological sites and a leading tourist attraction.

Although ancient graffiti has indicated that the site may have been inhabited as early as the 3rd Century BC, it was during a short period in the 5th century that Sigiriya gained its fame. In AD 477 a fortress was established here by King Kasyapa who feared an impending invasion from India by his exiled half-brother Mogallana who had sworn revenge for Kasyapa’s assassination of their father King Dhatusena. A fortified palace of exceptional splendour, often described as a place of hedonistic and sinful pleasure, was constructed as the flamboyant yet spiritual Kasyapa set about creating his own heaven on earth on top of the mighty acropolis. When the invasion finally came in AD 491, legend has it that Kasyapa rode out to battle on his war elephant and in an attempt to out-flank Mogallana’s forces, his elephant became stuck in mud. Mistakenly thinking their leader was retreating, his forces abandoned him, and confronted by the powerful army of his vengeful half-brother, Kasyapa took his own life. It has also been suggested that he was poisoned by his powerful and calculating wife. Whatever the truth, after his death the city was abandoned and Sigiriya became a monastic refuge, falling into disrepair before being rediscovered by British archaeologists in the 19th century.
There are many points of interest on the climb to the top including the beautiful Kasyapa water gardens at the base, the famous 5th century ‘Sigiriya Damsels’ frescoes and ‘Lion Platform’ before you finally reach the summit where stunning panoramic views over the surrounding countryside await.

Before climbing the great rock, the ruins of the city that Kasyapa built at its base are approached through a series of beautiful and elaborately landscaped terraced water gardens, symmetric pools, channels and fountains. Wide arrow-like straight paths lined with moats and low brick built walls lead over the ramparts of the lower citadel and the site is comparable in grandeur, if not scale, with other Asian wonders such as Cambodia’s Angkor Wat and The Forbidden City in Beijing.
The ascent of Sigiriya begins at a wide brick and stone staircase which leads upwards past the Audience Hall Rock and Cobra Hood Rock to a sheltered gallery displaying Sigiriya’s most celebrated sight – ‘The Sigiriya Damsels’ frescoes. Painted on the sheer rock face with a sense of perspective and shadowing, realism and ideology, overtly sensuous yet delicate images of beautiful apsaras, often referred to as the ‘heavenly maidens’, lend weight to the theory that Sigiriya was created as a lustful pleasure ground and indeed, King Kasyapa had over five hundred originally painted on the walls of the gallery before the ravages of time, weather and vandalism reduced these to just 22.
Just past the staircase which leads to the Damsels, is another of Sigiriya’s unique sights. ‘The Mirror Wall’ is so-called because of the wall of polished plaster upon which is scrawled 1000 year old erotic graffiti in Sinhala, Sanskrit and Tamil language noting visitors’ impressions of the paintings in the fresco gallery above.
At the northern end of the rock, the ascent continues to a platform from which Sigiriya derives its name (Lion Mountain). Hewn out of rock, brick and plaster, a gigantic pair of Lion’s paws are all that remains of what was once the one and only entrance to the Royal Palace. Before their erosion by monsoon rains and wind, the paws supported the stout legs and head of a crouching lion with jaws wide open and all visitors to the palace would have had to pass through this portal to reach the heart of Kasyapa’s domain – an affirmation of power and kingship.
British colonialists installed a rickety-looking vertiginous spiralling metal staircase to replace the original brick stairway leading to the summit and cantilevered off the rock face it is almost impossible not to experience at least a slight frisson of vertigo. After the narrow terraces, stairways and paths, the stepped plateau of the summit is surprisingly spacious and enough of the royal palace remains to realise that you have entered what would have been Kasyapa’s magic kingdom in the clouds. The highest part of the summit would have been occupied by the Royal Palace with the living quarters of servants and soldiers situated on the lower areas together with a series of terraces which were possibly gardens offering breathtaking views over the surrounding plains.

Perhaps Sigiriya should have been classed as one of the Wonders of the Ancient World? What isn’t in doubt though is the fact that its scale and setting are simply stunning and is sure to be one of the great highlights of any visit to Sri Lanka.