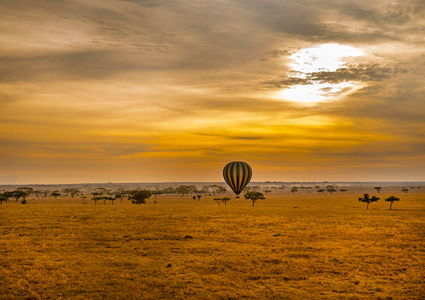 Tanzania has more land dedicated to national parks and reserves than any other wildlife destination in the world. From rolling grassland, unspoilt coral reefs, and remote game reserves to the majestic Mount Kilimanjaro, wildlife rich Ngorongoro Crater and vast Serengeti, these national treasures are all protected by law. With such wide a great variety of National Parks and Game Reserves,Tanzania makes an excellent choice for your next wildlife safari to Africa.

Tanzania’s oldest national park, the Serengeti is located in northern Tanzania, approximately 335km north of Arusha. The park is now a UNESCO World Heritage site and has been made famous for its annual mass migration of Wildebeest and Zebra. The Great Migration doesn’t occur at the same time every year however it normally begins sometime towards the end of May or beginning of June. At this time of year as many as 1,500,000 Wildebeest and 200,000 Zebra begin moving north to the lush plains of the Maasai Mara in Kenya. This spectacle is hard to describe in words but if you are lucky enough to be in Tanzania at this time, it shouldn’t be missed!

If you are travelling to the Serengeti at other times of the year then there is still an abundance of wildlife for you to view throughout the year.

The Ngorongoro Crater is a remarkable natural amphitheatre situated in the north of Tanzania where up to 20,000 medium to large animals live out their lives. Much of the accommodation is located on the crater rim where you marvel at the views over this natural animal refuge. The crater stretches approximately 9 miles across and is covered by flat open grassland, forest and lakes.

The crater once belonged to the Maasai and even now you can witness the Maasai bringing their herds down to the craters Soda-Licks around Lake Makat.

The crater has an abundance of wildlife which you will be able to view such as Lions, Black Rhino, Spotted Hyena, Elephant, Wildebeest, Zebra and Buffalo to name but a few.

The Land of Kilimanjaro

Africa’s highest peak, Mount Kilimanjaro rises from the Savannahs of North Eastern Tanzania, close to the Kenyan border. The mountain stands at an impressive 5,892m and is made up of 3 dormant volcanoes – Kibo, Mawenzi and Shira, Kibo being the tallest. For those looking to climb Kilimanjaro a number of routes are available. The most popular routes are the Marangu and Rongai routes however due to these routes being the easiest and most popular they tend to be the busiest and assent and decent routes are the same. The Machame route is by far the most scenic but this is a much steeper route.

Despite being one of Tanzania’s most beautiful parks, Arusha is often overlooked by tourists who favour the more spectacular parks such as the Serengeti or Ngorongoro Crater. The park has a varied landscape of offers the opportunity to explore many different habits in just a short time. Kilimanjaro’s cousin, Mount Meru is located within the parks protected perimeters. Meru is a good trekking option in its own right, treks normally take around 3 days or for those looking to trek Kilimanjaro, Meru is a good option for acclimatisation. Elephant and Buffalo are present on Meru and for this reason you must be accompanied by armed ranger.

Away from Meru, Arusha offers shadowy forest’s which are inhabited by (among others) Blue Monkeys and Colobus Monkeys, the Ngurdoto Crater is often inhabited by herds of Warthog or Buffalo and the alkaline Momela Lakes in the north of the park with their varied colours and the resident Flamingos. On the green hills which surround Momela Lakes you can often spot Giraffe, Zebra and Dik-Dik.

Gombe Stream is Tanzania’s smallest national park and home to the worlds longest running Chimpanzee Behavioural Research Centre which was founded by Dr Jane Goodall in 1960. The park is located on a strip mountainous forest which straddles the steep slopes and valleys close to Lake Tanganyika, in the West of Tanzania.

The parks Matriarch, Fifi who was just 3 years old when Goodall first visited the park and the last surviving member of the original community is still often seen by visitors.

Beside Chimpanzees, Gombe Stream is also home to other primates, namely Baboons, Red-Tailed Monkey and Vervet Monkeys. In addition to these primates, the park is home to over 200 species of bird, many snakes and the occasional hippopotamus.

Visiting the park needn’t be just to visit the Chimpanzee’s though; the shores of Lake Tanganyika offer some excellent snorkelling opportunities where you will be able to view the many species of colourful Cichlid Fish.