Our Lebanon tours take a deep dive into this small but adventurous Mediterranean country that offers a goldmine of historic sites to visit - although it has a turbulent history, it now makes a great place to visit, either in its own right or as part of a longer Middle East holiday itinerary.

At Encounters Travel our Lebanon tours include many places of interest such as the capital city Beirut, the impressive Roman remains of Baalbek, the old souks in Tripoli, and the mosaic streets and the massive Roman hippodrome in Tyre.

Our Lebanon tours usually start in its modern capital city of Beirut, which is the perfect base to explore Lebanon from and is regarded as one of the liveliest cities in the world - with excellent restaurants, theatres, pubs and nightlife. From here, it's easy to make excursions into the surrounding countryside.

To the north, the coastal city of Tripoli is famous for its sweets and traditional olive oil-based soap, which can be bought in its wonderful old covered souks.

Inland lies the well-preserved Roman remains at Baalbek, with the colossal temple of Bacchus as the main attraction.

To the south, scuba diving and snorkelling in the waters around the ancient city of Tyre, where divers can explore interesting underwater archaeological ruins - this is a popular option among travellers on a Lebanon tour. The city is also home to one of the largest Roman hippodromes ever discovered.

For more active options, there is plenty of great scuba diving and snorkelling along the miles of the Mediterranean coast, along with other popular water sports.

Inland in the mountains, there is excellent walking and skiing, with several great ski resorts available.

Don't hesitate to contact us if you're looking for something more private, then our escorted Lebanon tours are something to consider.

If you're looking for travel inspiration, head over to our blog which provides excellent insight into our many travel destinations.

Do you want to know more about Lebanon and its beauty? Or do you need accurate visa information? 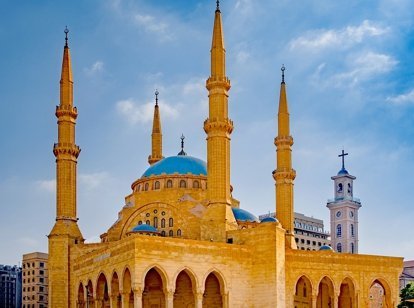 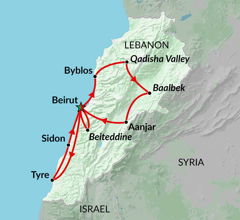 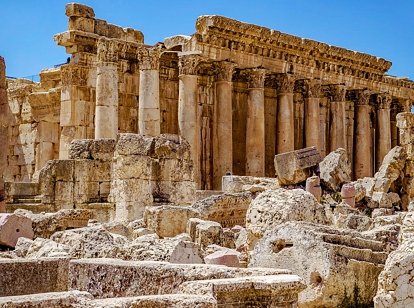 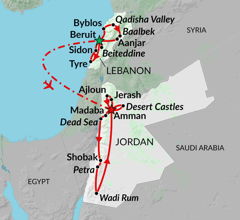 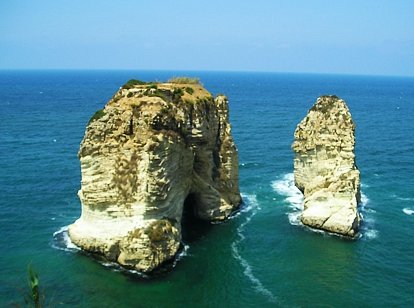 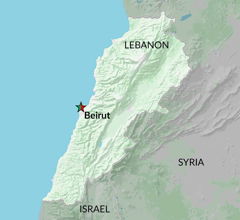 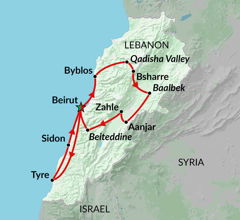 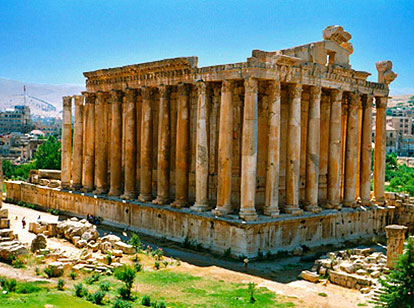 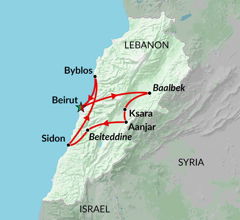 What type of climate can I expect on your Lebanon tours?

Lebanon’s climate is best described as a temperate Mediterranean climate with warm, arid summers and cold, wet winters. In comparison to its more arid neighbors, Lebanon is considered to have rainy, wet weather which is why Summer is generally a more popular time to visit as there is generally no wet weather.Autumn and Spring are also considered optimal times of the year to visit as there is less humidity, fewer rainy days and cooler temperatures. There are also fewer tourists during Autumn and Spring in comparison to Summer.During Winter, there is often snow-fall towards the mountain regions and there are several ski resorts throughout the country. However, during Winter the coastal region is still relatively mild and temperatures below 13°C (55°F) are rare.

What is the official language of Lebanon?

What currency is used in Lebanon?

The official currency of Lebanon is the Lebanese pound(LBP) or Lebanese Lira which is often abbreviated to â€œLLâ€. The value of their currency is kept stable relative to the US dollar, with a value of LL 1,500 to US$1.Most places in Lebanon accept Either Lebanese pounds or US dollars and it is common to pay in dollars but receive change in Lebanese Lira.

What can I see and do on your Lebanon tours?

Lebanon is abundant in natural scenery, with sandy beaches to breath-taking mountains and valleys. The Lebanese people are prideful of their country because it is one of the few countries in the world that offers the opportunity to go skiing in the morning and then visit the beach in the afternoon. However, it is only possible to go skiing for a few days of the year during the snow-fall periods in Winter.

What can I see and do in Lebanon?

Lebanon is abundant in natural scenery, with sandy beaches to breath-taking mountains and valleys. The Lebanese people are prideful of their country because it is one of the few countries in the world that offers the opportunity to go skiing in the morning and then visit the beach in the afternoon. However, it is only possible to go skiing for a few days of the year during the snow-fall periods in Winter.

What type of food can I expect to eat in Lebanon?

Lebanon boasts an outstanding range of exquisite cuisine, ranging from mezze like dips such as hummus, to salads such as tabbouleh and stuffed vine leaves called â€˜inab. Groups going to a restaurant often share a variety of Mezze which reflects the cultural and social importance of food in the Lebanon. The concept of sharing an array of different foods allows you to try several different Lebanese dishes in one sitting. The main dishes often involve meats that have been barbecued in a Labense style, such as a Shish Tawouk (barbequed chicken).

How do I plan a trip to Lebanon?

A trip to Lebanon will vary depending on each person’s individual travel goals. We offer a range of Lebanon tours which take you through each of the major attractions in Lebanon. Our tours include visits to the great Phoenician cities of Tyre and Sidon. You will see Byblos, the oldest continually inhabited city in the world, and the City of the Sun, the most well-preserved temple complex in the Middle East.

How much is a meal in Lebanon?

Meals in Lebanon are relatively affordable, with an average lunch at an inexpensive restaurant costing roughly $10 per person. A meal for two at an upper class restaurant with three courses costs roughly $50, including drinks.

Is it safe to travel to Lebanon?

Lebanon is relatively safe for tourists as there is little risk of violent crime, most crime in Beirut is petty theft. However, it is important for visitors to take caution and avoid specific areas which pose a high risk, such as areas near the borders of the country. Each of our tour guides are experienced in guiding visitors through the major attractions in Lebanon safely, by avoiding specific areas.

Do you need vaccinations to go to Lebanon?

How much would a trip to Lebanon cost?

A trip to Lebanon will vary in cost depending on your accommodation, food, activities and the duration of your trip. We recommend budgeting around $50 USD per day for those interested in comfortable accommodation in a private hotel room, activities, meals etc. Our Lebanon tours range in price from roughly $800 USD for a 4 day tour to $1500 USD for an 8 day tour, this price will vary depending on the tour you choose.

Where should we go in Lebanon?

Lebanon is a beautiful country which boasts ancient historical settlements and sights. We recommend visiting the Phoenician cities of Tyre and Sidon as these are must-see attractions in Lebanon. We also recommend visiting Byblos, which is the oldest continually inhabited city in the world. Lebanon boasts a variety of natural sights for those interested in nature and scenery, we recommend trips to Ksara Caves, Rock of Raouche and the Baatara Gorge Waterfall.

How many days in Lebanon is enough?

We recommend spending a minimum of 5 days in Lebanon, with the optimal amount of time being 8-11 days in Lebanon. This will provide visitors with sufficient time to fully immerse themselves in the unique culture of this fascinating country as well as visit each of the major attractions.

What is the best month to visit Lebanon?

The months of November and April are considered optimal times of the year to visit as there is less humidity, fewer rainy days and cooler temperatures during these Autumn and Spring months. There are also fewer tourists during Autumn and Spring in comparison to Summer.

Lebanon is a relatively affordable country by Western standards but the country is more expensive than neighbouring countries. We recommend budgeting a minimum of $50 USD per day for a relatively comfortable hotel room, activities and food. The price of your trip will vary depending on the type of accommodation, food and activities that you choose and also the duration of your trip.

Tied to its turbulent history, Lebanon sometimes sees very few travellers flocking to its beauty and welcoming locals – however, one must know that visiting Lebanon is one of the most rewarding experiences you can have as a traveller. Lebanon is filled with both ancient and modern charms – the country has undergone a rebirth in recent years, presenting visitors with a country that enjoys the rich benefits if its past and its bustling future. Hugging an endless blue coastline on the eastern shore of the Mediterranean Sea, this small country of just 3.7 million has far more to offer than its size and population suggests. Lebanon's capital of cool, Beirut, is most likely to be your first stop - labelled everything from 'The Paris of the Middle East' to 'the party capital of the Arab world' and the 'the adrenalin sports capital of the Middle East', it won't be long before you realise why Beirut was once one of the world's most fashionable travel destinations. Away from the chic buzz of its thriving cities, Lebanon’s historic past can be seen in its crusader castles and the crumbling ruins of the seventh-century Umayyad city of Aanjar. Lebanon is home to both skiing and sun, a mostly liberal population, and bars and nightclubs that rival those found in Europe, it is the complete opposite of what most people imagine the Middle East to be. Across the mountains of the east, through the terraced hills of the Shuf region and down to the beaches of the western coastline, Lebanon is easily recognized as a vibrant and modern country perfect for an extraordinary adventure. Coolly combining everything the ancient and new world has to offer, Lebanon is a country that startles as much as it amazes.