Thoughts of Maldives holidays evoke pictures of beautiful palm-fringed islands with great beaches, stunning coral reefs, hot sunshine and warm turquoise seas; and high prices! Well, we've devised a program of Maldives tours that see and experience a lot more of this beautiful island nation than most holiday makers ever do, and at much cheaper prices as well.

Instead of staying in one resort, our Maldives tours visit various different local islands and stay in comfortable friendly guesthouses or on board safari boats. We include a wide range of activities so you see the best of the Maldives' classic attractions as well as gaining an insight into the local way of life. These include several snorkelling trips; day trips to beautiful palm-fringed picnic islands; beach BBQs; a sunset picnic meal on a deserted sandbar; several meals with local families where you can try the local cuisine; evening fishing trips with local fishermen where you can try some traditional hand and line fishing and cook your catch afterwards; and tours of Male city and various inhabited local islands.

You also have plenty of free time to relax on the beach or try some more watersports activities including a wide range of scuba-diving options, more snorkelling, sea kayaking, surfing, windsurfing and catamaran sailing. Various extension options are available to add more days on the local islands, or to visit one of the Maldives' famous luxury resort islands.

All in all, our small group Maldives tour packages offer you an interesting, fun and exciting alternative to the average beach holiday at a much lower cost, and at the same time give you plenty of time to unwind and relax in one of the most beautiful places on earth.

These tours are also available to book privately, and don't forget to also check out our Maldives on a Shoestring tour (formerly Maldives Magic).

Maldives on a Shoestring
-11%
Map 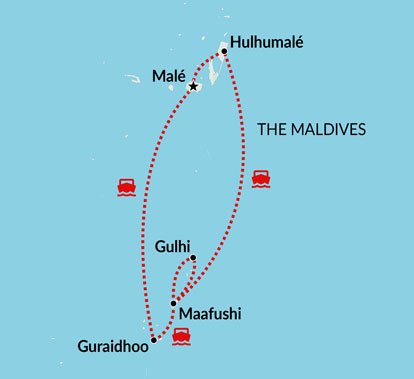 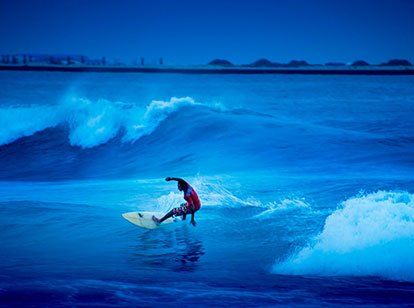 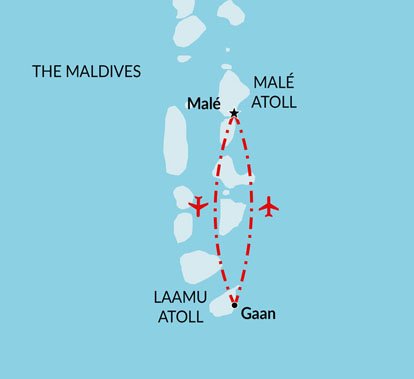 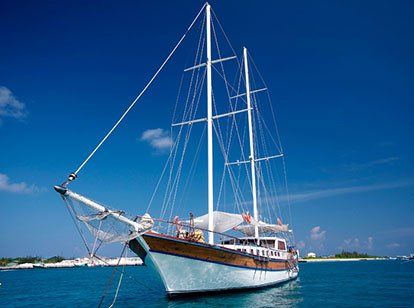 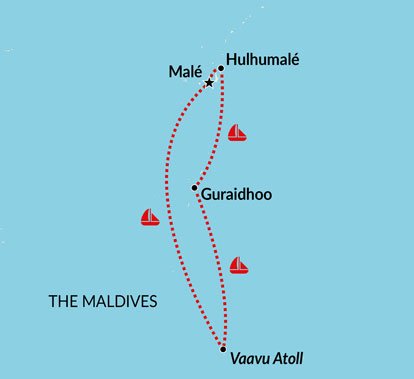 When is the best time of the year for Maldives tours?

The best time to visit the Maldives is between November and April, as the weather is warm and there is little precipitation.

Is it safe to visit the Maldives?

Despite political unrest in the capital, the Maldives Ministry of Tourism has declared the country safe for tourists.

What is the official currency of the Maldives?

The currency of the Maldives is the rufiyaa, which is divided into 100 laari.

What to wear in the Maldives?

In resorts, you can be casual, and swimwear is acceptable. If you are visiting an inhabited island, you should dress conservatively and cover your legs and shoulders.

Is the tap water safe to drink in the Maldives?

The tap water is not safe to drink in the Maldives and it is advised to drink only bottled water.

Time: GMT+5
Dial Code: +960
Area: 298 kmÂ²
Elevation: The lowest point in the Maldives is the Indian Ocean at 0m | The highest point in the Maldives is an unnamed location on Viligili in the Addu Atholhu at 2.4m (7.88 ft.)
Population: 444,259 (2018
Capital: MalÃ©
Governemnt: Republic, Presidential system, Unitary stat
Language: Maldivian (Dhivehi)

The Maldives, officially the Republic of Maldives, is a South Asian sovereign state, positioned in the Arabian Sea. The Maldives is made up of a chain of 26 atolls that stretch from the Ihavandhippolhu Atoll in the north to the Addu City in the south.

The country is one of the world's most geographically dispersed countries as well as the smallest Asian country by land area and population. Malé is the capital and the most populated city in the Maldives.

The Maldives archipelago is located atop Chagos-Laccadive Ridge - an expansive marine range in the Indian Ocean. Given the country's average ground elevation of 1.5 metres (4 ft.) above sea level, the Maldives is the world's lowest country.

The dominant economic activity in the Maldives is fishing and it remains the largest sector. Tourism is the second rapidly growing industry. The World Bank classifies the Maldives as having an upper middle-income economy.

The country is made up 1,192 coral islands grouped in a double chain. The largest island is called Gan and more than 80% of the Maldives' land is composed of coral islands.

The Maldives has a tropical monsoon climate and two seasons dominate the weather: the dry season associated with the winter northeastern monsoon and the rainy season, which includes storms and strong winds.

There are a diverse variety of habitats, including reef ecosystems and shallow coast. This part of the Indian Ocean is home to 1,100 species of fish and 187 species of coral.

A Taste of the Maldives

The sun dipped down below the horizon and the beautiful white sand turned a golden yellow. This was the picture-perfect start to my Maldives trip with Encounters Travel.