Situated between the towering peaks of the Andes Mountain range and the dense steaming jungle of the Amazon rainforest, Bolivia promises travellers the perfect mix of adventure, culture and warm hospitality. Starting in the altitude busting capital of La Paz, visitors to this South American country will experience panoramic views almost every day as they journey through the lush valleys to the vast and improbable Salt Flats, home to ancient volcanoes and tranquil lagoons before exploring the tropical rainforests full of Bolivia's rich and varied wildlife.

Discover the beauty of South America on our special two week Bolivia tour as we explore the capital La Paz before jumping into 4WD vehicles to tour the historic towns and abandoned mines of the dramatic Salt Flats. You'll learn about the history of the country as we visit the site of Bolivia's declaration of independence in beautiful Sucre and journey through the rainforest in search of anacondas, alligators and other incredible wildlife on this trip of a lifetime. We also offer tours that finish in La Paz after starting off in Peru. 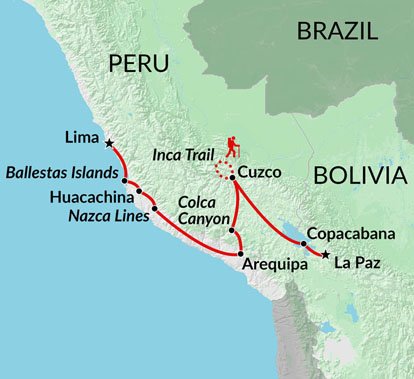 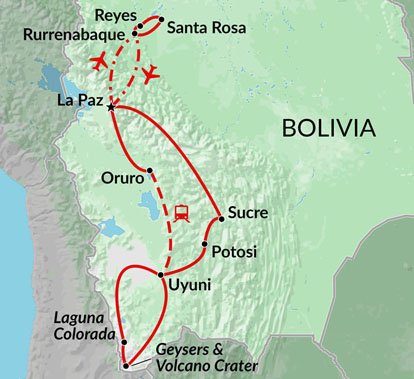 Every adventurer dreams of a truly intrepid travel experience.

Dominated by the Andean mountain range, and wedged between the South Pacific and Amazon rainforest, Peru is a country that has so much to offer travellers and trekkers.