Have you ever wanted to explore the beautiful sights of Uganda? Our Uganda tours will show you the best of this compact African country, which boasts the highest concentration of primates on the planet.

Uganda is a unique and exciting destination which should be on any traveller's bucket-list. From breath-taking wildlife to authentic culture, Uganda will leave you with lifelong memories that you will cherish forever.

On a Uganda tour you will have the chance to experience an authentic Uganda safari. From beautiful nature parks to the jungles which home mountain gorillas and chimpanzees - our Uganda tours will have you immersed from day 1. Get a chance to explore Uganda’s breath-taking National Parks through immersive game drives and safari tours.

Uganda attracts 1.5 million visitors each year and with good reason. This fascinating country is home to beautiful lakes, unique wildlife and friendly locals. Locals in Uganda are welcoming and friendly towards visitors and are usually quite happy to see visitors in their country enjoying the amazing sights.

Uganda has an exciting array of wildlife including: elephants, rhinos, crocodiles, hippos, chimpanzees and gorillas. Enjoy a Uganda safari and set your sights on some of the most incredible and unique wildlife in the world.

Primates are a primary highlight during a Uganda tour, however Uganda is also home to some incredible scenery and activities. See the incredible lakes, waterfalls and waterways and trek in lush greenery during a Uganda tour. The country also has an abundance of bird-life which light up the jungles and forests with their songs - perfect for those who enjoy bird watching.

Away from the mountains, Uganda has stunning freshwater lakes, dreamy rolling hills, expansive grasslands and bustling cities filled with welcoming and friendly locals to be found anywhere in Africa.

Packed with amazing experiences, Uganda is well set up for visitors and this combined with great wildlife, beautiful picture perfect landscapes and smiling locals makes it the perfect destination for your next African adventure. 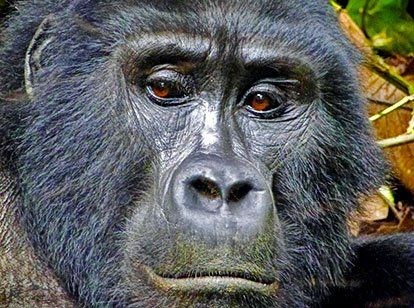 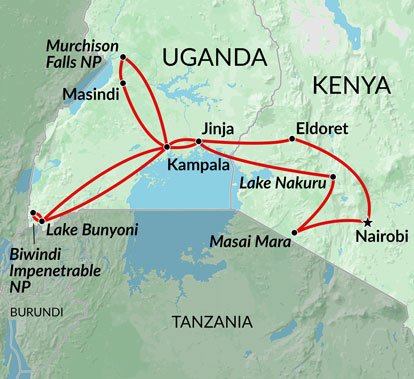 Is it safe to visit Uganda?

Uganda is one of the safest and most secure countries in Africa. Common crimes include petty theft and pickpocketing.

What is the official currency of Uganda?

The currency used in Uganda is the Ugandan shilling (UGS), which is subdivided into 100 cents.

When is the best time of the year to visit Uganda?

Should you tip in Uganda?

Tipping is highly appreciated in Uganda, especially for safari guides. A 5-10% tip is expected in upmarket hotels, restaurants and lodges.

Can you drink the tap water in Uganda?

The tap water in Uganda is not safe to drink, and you should not even use it to brush your teeth. Bottled water is readily available.

Uganda, officially the Republic of Uganda, is a landlocked country in East-Central Africa. This country is bordered by Kenya to the east, South Sudan to the north, the Democratic Republic of Congo to the west, Rwanda to the southwest, and Tanzania to the south. Lake Victoria covers a large part of the southern part of the country and lies within the Nile Basin.

The name Uganda derives from the Buganda Kingdom, which covers a substantial portion of the south of the country, including Kampala, the capital. This sovereign state gained independence from the UK in 1962. The official languages spoken in Uganda are English and Swahili. Luganda, a central language, is also spoken across the country. Swahili is widely used in the police and military forces.

Scattered throughout Uganda, there are 60 protected areas, including 10 national parks. The south of the country is largely influenced by Lake Victoria - one of the world's biggest lakes. Most of the country's main cities are situated in the south near the lake, including Kampala, the capital, and Entebbe.

The most prominent religion in Uganda is Christianity, and Christians make up most of the population, followed by Muslims. The northern region of Uganda is predominately Catholic The country has a vast number of communities, resulting in a diverse country. Uganda has continued to experience consistent economic growth. The country's main export is coffee and it has untapped reserves of both crude oil and natural gas.

Known as the ‘pearl of Africa’, Uganda may be compact but it has a good infrastructure and is rich in culture and history with an impressive and diverse wildlife population.