Often described as 'the real Africa', Our Zambia tours explore one of Africa's most amazing and rewarding country's to visit.

Zambia offers some of the best safari tours in Africa, boasting excellent wildlife experiences, including world-class bird-life and big game to rival anywhere in Africa. Our clients on our Zambia tours often remark that Zambia is so much less touristy than its more popular neighbours.

Our Zambia tours will take you to a variety of wildlife parks, with the South Luangwa National Park being the pick which is home to Victoria Falls, Africa's largest waterfall and well know as the adventure capital of Africa'.

Our Zambia tours are also an angler's dream, as the mighty Zambezi River attracts fishermen from around the world in search of the hard fighting tiger fish and the elusive giant vundu.

Although not the easiest country to get around, our Zambia tours are a perfect way to experience Zambia whilst still retaining an element of comfort and security you'll be hard-pressed to find when travelling independently. Safaris in Zambia are a once-in-a-lifetime experience - book one today.

Need more inspiration? Here are some quick facts that will make you want to explore Africa.

Do you want to know more about Zambia and its beauty? Or do you need accurate visa information? 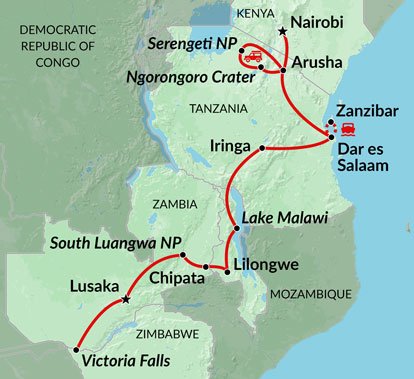 Is it safe to visit Zambia?

Zambia is generally very safe to visit. In the bigger cities and tourist areas, you should watch out for con artists and muggers. Avoid areas along the Zambia-Congo border, especially around Lake Mweru, due to civil strife in the Democratic Republic of Congo.

When is the best time of the year to visit Zambia?

The best time of the year for game viewing is during the dry season (May to October). September and October can be extremely hot. From November to April, the rainy season results in beautiful, green landscape.

What should you wear in Zambia?

You should wear neutral colours for safari, shorts for hot days and lightweight trousers for walking in the bush and towns where the dress code is conservative.

Can you drink the tap water in Zambia?

The tap water is not safe for drinking in Zambia. You can buy bottled water at most shops, and it is cheap.

What is the official currency of Zambia?

The currency used in Zambia is the Zambian kwacha (ZMK), which is subdivided into 100 ngwees.

Lusaka is the capital city of Zambia, located in the central part of Zambia. Majority of the population can be found around Lusaka in the south and in the Copperbelt Province. In 1964, Zambia became independent of the United Kingdom. The World Bank named Zambia one of the world's fastest economically reformed countries in 2010.

The country has a tropical climate and the landscape is characterised by high plateaus with some mountains, hills and river valleys. Zambia has two major river basins: the Zambezi/Kafue basin in the centre and the Congo Basin in the north. Zambia is positioned on the plateau of Central Africa, and the country experiences two main seasons: the rainy season (November to April) and the dry season (May/June to October/November).

There are 14 ecosystems in Zambia, which are divided into thicket, woodland, grassland, and forest vegetation types. Around 242 mammalian species live in Zambia. The Kafue lechwe and the Rhodesian giraffe are endemic to Zambia. An estimated 757 bird species can also be found in the country. The Zambian barbet is a well-known species endemic to Zambia.