Do you want to see Africa's iconic Big Five wildlife? Then a Tanzania tour should be at the top of your list.

Home to Africa's iconic Mt. Kilimanjaro and an incredible array of fascinating wildlife, our Tanzania tours will create a lifetime of memories.

Take in extraordinary views and explore lush valleys dense with tropical rainforest are on offer to all those wishing to trek to the top of Africa's highest mountain, while the National Parks of the Serengeti and Ngorongoro crater provide visitors with great opportunities to view the vast array of animals and birds that populate this beautiful African country.

Discover the incredible landscapes and warm hospitality on one of our group Tanzania tours. Whether you want to join us on our ascent of the iconic Mt Kilimanjaro or simply visit the Serengeti National Park to experience some of the very best wildlife viewing in the world, you'll look back at your tour to Tanzania as the trip of a lifetime.

For the perfect end to your stay in Tanzania why not spend a few nights exploring the beautiful islands, beaches and tropical blue waters of Zanzibar?

Our Tanzania tours also take you to the Serengeti National Park, which plays a key part in one of nature's greatest spectacles - the wildebeest migration. Every year, millions of wildebeest make their way from Kenya's Masai Mara Game Reserve, crossing the treacherous, Nile crocodile-infested waters of the Nile River and head back to the southern Serengeti to give birth to a new generation.

During the months of January to March, the migratory herds of wildebeest, zebra and other wildlife descend on southern Serengeti for calving season, giving travellers on safari in Tanzania the unique opportunity to see this live. Predator interaction is dramatic during this period as well, as lion, leopard and cheetah move into the area to take advantage of the vulnerable calves - creating the ultimate battle for survival.

The herds will slowly begin to make their way north between the months of March to August before they descend back into the Masai Mara - if you're lucky to be on an African safari at the time - you may see some early river crossings at the Grumeti River.

Thinking about going on a Tanzania tour but need some encouragement? Here are some quick facts that will make you want to explore Africa.

Do you want to know more about Tanzania and its beauty? Or do you need accurate visa information? 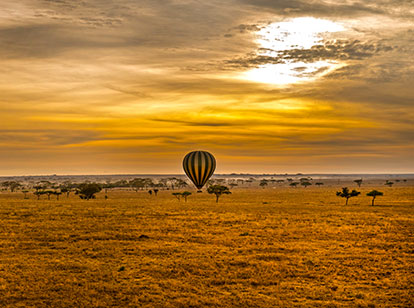 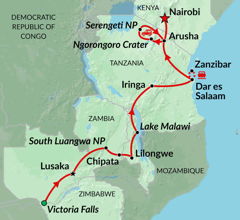 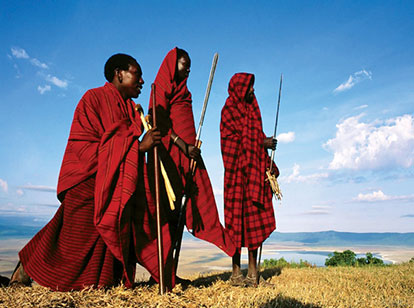 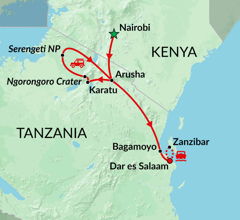 Incredible wildlife of the Ngorongoro Crater, Endless savannahs of the Serengeti National Park, Coral reefs and beautiful beaches of Zanz... 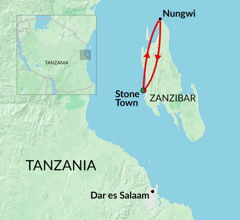 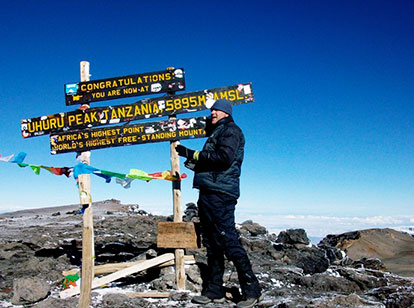 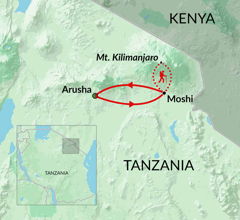 Is it safe to visit Tanzania?

In general, Tanzania is a safe place to visit if you take precautions and follow the government travel advisories. You should avoid isolated areas and take taxis at night.

What is the official currency of Tanzania?

The currency used in Tanzania is the Tanzanian shilling (TZS), which is subdivided into 100 senti (cents).

When is the best time of the year to visit Tanzania?

The best wildlife viewing months are during the dry season from late June to October. If you want to see the wildebeest migration in the Serengeti, the best time to visit is during June and July.

Should you tip in Tanzania?

Tipping in Tanzania is not obligatory and should always be dependent on the quality of service. For those working in the service industry, tipping can make up an important part of their income.

Is the tap water safe to drink in Tanzania

The tap water is not safe for drinking in Tanzania. To avoid getting sick, you should only drink bottled water or filtered water.

How do I plan a trip to Tanzania?

Planning a trip to Tanzania isn’t as hard as it may seem although a few things need to be considered – what is your budget like, how long you’re planning on staying, what you’d like to do, see, and so on.If you choose to plan a Tanzania tour through us at Encounters Travel you won’t have to do much planning as our Tanzania tours are already well planned out.

How much is a meal in Tanzania?

While meal prices in Tanzania can vary, however an average meal in Tanzania cost around TZS12,222 per person. Breakfast prices are usually cheaper than lunch and dinner.

Do people in Tanzania speak English?

Tanzania is an East African country and its official language is Swahili.English is widely spoken and a few others are also spoken in the country – this varies from different ethnic groups. The ethnic languages are mainly of Bantu and Nilotic origin.

Do you need vaccinations to go to Tanzania?

Yes, certain vaccinations are needed when you travel to Tanzania – the CDC and WHO recommend the following: hepatitis A, hepatitis B, typhoid, yellow fever, rabies, meningitis, polio, measles, mumps and rubella (MMR), Tdap (tetanus, diphtheria and pertussis), chickenpox, shingles, pneumonia and influenza.

How much would a trip to Tanzania cost?

Many factors play a role in the overall cost of a trip to Tanzania such as where you’d like to stay, how long you plan on staying, your budget, etc.

Where should we go in Tanzania?

There are many things to do and see when you travel to Tanzania – some of the best places to visit and enjoy a safari include Katavi, Selous, Ruaha, Tarangire, and Ngorongoro.There's also the Serengeti where you can witness the great annual migration of millions of wildebeest.

How many days in Tanzania is enough?

This depends on what all you want to accomplish while you’re in Tanzania - 8 - 10 days should cover the Northern Circuit (Tarangire, Ngorongoro, Serengeti) if you want to visit other areas; Lake Victora, Mahale Mountains, Ruaha, Selous, Zanzibar then you can keep adding as many days as you like.

What is the best month to visit Tanzania?

From late June to October is the best time to visit Tanzania - wildlife viewing during this time is generally at its best.The wildebeest migration in the Serengeti is usually during June and July and the time to see the wildebeest calving is late January to February.

Generally speaking, Tanzania is pretty affordable apart from its National Park fees – these are quite expensive.Yes, safaris can be expensive but once you get away from these then Tanzania is a very cheap country to visit.

Tanzania, officially the United Republic of Tanzania, is a country in Eastern Africa, located in the African Great Lakes area. The country borders Uganda and Kenya to the north, Burundi, Rwanda and the Democratic Republic of the Congo to the west, Malawi, Mozambique and Zambia to the south, and the Indian Ocean to the east.

The population of Tanzania is made up of a variety of linguistic, ethnic, and religious groups. The official capital city, Dodoma, is where the National Assembly, the president's office and some government ministries are located. The sovereign state of Tanzania is a presidential constitutional republic.

In the northeast, the landscape of Tanzania is mountainous and forested. Three of Africa's Great Lakes are partly within Tanzania, including Lake Victoria, Africa's largest lake, and Lake Tanganyika, the continent's deepest lake.

The Zanzibar Archipelago is located on the eastern shore, which is humid and hot. On the Zambian border, Kalambo Falls, on the Kalambo River, is situated. This is the second highest uninterrupted waterfall in Africa. Tanzania also has 16 national parks.

There are over 100 languages spoken in Tanzania, which makes the country the most linguistically diverse in East Africa. There is no official language in Tanzania, although the national language is Swahili. Around 10% of Tanzanians speak Swahili as a first language and up to 90% speak it as a second language. English is used as a medium of instruction in secondary and higher education.

Tanzania has more land dedicated to national parks and reserves than any other wildlife destination in the world. From rolling grassland, unspoilt coral reefs, these national treasures are all protected by law.