Looking at Chile on a world map makes it seem absurdly thin and absurdly long, as it stretches from South America's belly to its foot. It’s home to environments on both ends of the geological scale, from some of the world’s driest deserts to icy southern glacial fields.

On our Chile tours, you can expect to see some of the most dramatic and beautiful regions of Patagonia, from the coast and Chile's largest penguin colony to high glaciers and spectacular mountains.

On our adventurous Chile tours, one of the highlights is the quaint and colourful city of Punta Arenas, which is easily accessible by domestic flight from Santiago or by road or cruise from Ushuaia. Another must-see destination is the small island of Magdalena – which is home to to the native penguins – here, you’ll soon see that the island remains largely untouched and holds an abundance of natural beauty.

We’ll take you to the forests and dramatic mountains of Torres del Paine National Park – famous for its soaring mountains, bright blue icebergs that break off glaciers, and golden pampas (grasslands) that protect rare wildlife such as llama-like guanacos. There are three granite towers that give the park its name, as well as the horn-shaped peaks known as Cuernos del Paine, are among its most iconic features.

Chile is a land steeped in history, and daily life is infused with indigenous and European traditions. Chile's cultural heritage is represented by seven UNESCO Cultural World Heritage sites. Furthermore, their diversity - from Incan roads to Polynesian Easter Island to 19th-century city quarters - demonstrates how long the land's history truly is. Similarly, they are an important part of Chile's tourist attractions and one of the many compelling reasons to book a Chile tour.

Don’t hesitate to contact us if you’d like to lengthen your stay – one of our sales agents will be more than happy to assist. 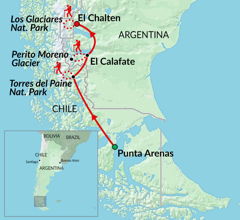 Does Chile require a COVID test?

It is no longer required for you to have a negative test when arriving in Chile. It is highly recommended that you have your updated vaccinations in order to enter the country.When boarding to Chile, you will need to have the following documents – a vaccination certificate and identification document. This will allow you to receive a mobility pass which you will need to enter many public places like hotels, movie theatres, bars, restaurants or even flights within Chile.In the event that you have not been fully vaccinated, you will be required to have a negative PCR test that is dated less than 48 hours from departure to enter Chile.

When is the best time to visit Chile?

Chile is a hard country to crack as its attractions are extremely varied. In the North, you’ll find the Atacama Desert which happens to be the driest desert on the planet while in the South, you’ll find the Patagonian ice fields which is the third freshwater reserve in the world. No matter the reason for your visit, there is a time best suited for everyoneIf you’re travelling to Chile for an outdoor excursion, the best time to go would be between November and March.If you’re looking to go for a more peaceful trip and want to skip the massive crowds, the best time to go would be between April and October. Please note: Finding accommodation during the off-season (June to August) may be a bit more challenging.If you’re a wild life enthusiast and would love to see what nature has to offer, between April and November would be the best time to take a trip to Chile.

Is English spoken in Chile?

The official language of Chile is Chilean Spanish. English is spoken by some locals in tourist areas, however, do not assume every individual you meet will be able to converse in English.

What currency is used in Chile?

The Chilean peso is the main form of currency in Chile. US dollars are accepted in most places throughout the country. Credit and debit cards are widely accepted in major cities and tourist areas but cash is still preferred and recommended for local markets. ATMs are common in the country and can be found easily. Official currency exchange centres are well signposted and easy for tourists to find.

What type of transportation can I expect to find in Chile?

Chile’s main forms of local transportation include buses, taxis, and the metro located in Santiago. There are domestic flights between most cities, which is the fastest way to travel within the country.

Offering diverse and breathtaking landscapes, Chile is a place like no other. You will be able to explore the most iconic and remarkable places.

There are mountains of places to explore such as the Torres del Paine National Park, Easter Island, Atacama Desert and Rapa Nui Parque Nacional.

It is also an adventure travellers paradise. Experience the adrenaline rush of skiiing, horseback riding, scuba diving and trekking.

As soon as you arrive on Chilean soil, you’ll definitely be welcomed with open arms. While in Chile, you’ll soon learn that there are some very peculiar social norms. Embrace the language of the locals as they express their vibrant culture and history.

You cannot leave Chile without indulging in the delicious cuisine. Experience an Asados, a barbecue that is the perfect social event to bring both the locals and the travelers together. Fun fact, the best Chilean food can be found on the streets. Try the empanadas, humita and the completo, you won’t be disappointed! What better way to pair this than with Chile’s famous wine selection.

Communities form an important part of the picture too. A European influence is obvious in the art and architecture of dynamic cities such as Santiago and Valparaiso. But it’s possible to find evidence of indigenous cultures: central Chile has been occupied by the Mapuche for thousands of years and descendants of Easter Island’s Polynesian Rapa Nui continue to live an isolated life on the mainland.