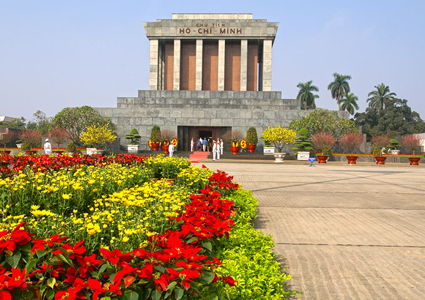 H? Chí Minh was born in 1890 and was the prime minister (1946–1955) and president (1945–1969) of the North of Vietnam. He was the Vietnamese Communist revolutionary leader and was most widely known for leading the Viet Cong during the Vietnam War.

His mausoleum, in Ba Ðình Square, took just under 2 years to build and though similar to Lenin’s Memorial in Moscow it has many Vietnamese features, such as a sloping roof, to set it apart. This imposing, grey granite structure is inscribed with the words “Ch? t?ch H? Chí Minh” which mean “President Ho Chi Minh”.

In his last will and testament, H? Chí Minh, stated that he wished to be cremated with his ashes divided into 3 urns and spread along the length of Vietnam, from North to middle to South. These wishes were ignored and, H? Chí Minh, now lies embalmed and preserved in a dimly lit room, in a glass case in the centre of this building.

The mausoleum is open Tuesday to Thursday & weekends from 8am to 11am (sometimes 7.30am to 10.30am) and closed during October & November for restoration. Please be advised that, when visiting you will need to have your knees and shoulders covered, walk solemnly and leave your possessions eg cameras, bags etc outside. Also do not be put off by the large lines of tourists streaming off coaches, the outside line moves quickly as you are filed around the body in two lines.