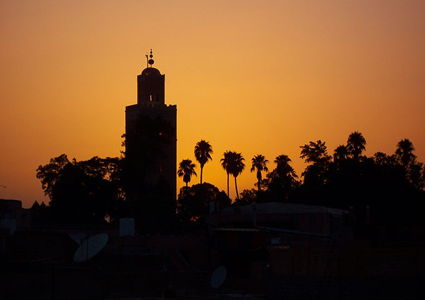 Founded nearly 1,000 years ago the ochre city of Marrakech is perhaps Morocco’s most well known and visited attraction. It’s lively Djemaa el-Fna square, where storytellers ply their trade and its mazy souks and myriad restaurants are enough to keep even the most adventurous visitor enthralled. Add to this a millennium of history, architecture, and art and you just about start to understand what makes this unique city Morocco’s jewel in the crown.

Here are our top 6 places to visit:

Djemaa el-Fna
The main square in Marrakech, this is truly the hub of the city and the gateway into the Medina. Lined with shops, cafes, and restaurants, the square comes alive at sunset when crowds of locals and tourists alike throng here to experience the food stalls, sellers, story tellers, snake charmers, jugglers and entertainers. Noisy, smelly, overcrowded and chaotic it may be, but for a more rewarding and intense experience, it’s hard to beat, and if it gets a bit too much head to one of the overlooking balconies for a more relaxed approach.

Al Koutoubia Mosque
Close to the Djemaa el-Fna, the Koutoubia mosque probably the most famous landmark in Marrakech and visible for miles in all directions. Constructed in the late 12th century by the Almohads it is dominated by its 70m minaret, the oldest and best preserved of their three most famous minarets, the others being in Rabat and Giralda in Spain. It’s certainly worth a full circle to find the best photo, which can vary depending on the light and the time of the day.

Marrakech souks
If shopping is your thing, then head to the souks of Marrakech. But be warned, it’s easy to get lost in the twisting, maze like alleyways that make up the commercial heart of the old city. Used by both tourists and locals it’s a wonderful mix of the exotic and the mundane. Looking for souvenirs, gold, silver, textiles, you’ll certainly find them here, but you’ll also find just about everything else from nails, to pots & pans, to cheap children’s toys. Be prepared to haggle hard and if you don’t have a great sense of direction you’d best take a guide to avoid the headache of getting lost.

Jardin Majorelle
These exquisite gardens, now owned by Yves Saint-Laurent, were originally designed by the famous French painter Jacques Majorelle, who lived in Marrakech from 1922 to 1962. Amongst the colourful flowers lies his blue villa, which has been given over to a small collection of Islamic art. It can get very busy here so choose your visiting times carefully if you don’t want to lose main point of a garden in a city – that being to get away from the crowds.

Musee de Marrakech (Marrakech Museum)
Housed in the Dar Menebhi Palace, which was built in at the end of the 19th century, this palace was renovated and converted into a museum in 1997. The Palace itself is a great example of Andalusian architecture, with fountains in the central courtyard, traditional seating areas, a hammam and intricate tilework and carvings. The museum exhibits of both modern and traditional Moroccan art along with fine examples of historical books, coins and pottery of Moroccan Jewish, Berber and Arab cultures.

Medersa Ben Youssef
Built in 1565 this medersa (theological college) is the biggest in the Margreb. It’s certainly worth a visit to view the wonderful and intricate architecture, tranquil pools and tinkling fountains and to enjoy the relative serenity, compared to the hustle and bustle of the streets outside.