A brief history of Turkey 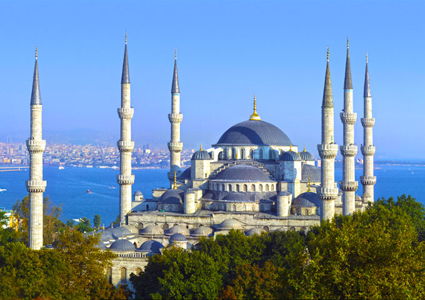 Turkey has a long a varied history which dates back as far as 50,000 years where evidence of habitation can be found within a cave at Karain, north of modern day Antalya. The Karain cave was lived in up until the middle of the 20th century, making it on the longest continually inhabitated spots on earth.

Chinese history records the first appearance of Turks, back to the 7 th Century BC during the Tagar culture, which itself originates from another ancient culture the Karasuk, dating back to 2000BC.

During the Bronze Age (3000-1200BC), the Hattians lived in Central Anatolia, but it was the immigrant Hittites who established a kingdom, which lasted from 1750-1200BC. When Iron came into general use (Iron Age, 1200-700BC), it was the Phrygians, (who were partly responsible for the destruction of the Hittite Empire), that came into power. The Phrygians were followed by the Hellenic Ionians, (who built important cities between the 11 th and 6 th Centuries BC), and the Ionians were followed by the Lydians, Carians, Lycians, Ionians, and Byzantines all of whom established great civilisations in Anatolia over the next few centuries.

However, it was the Hun State where Turkish political history is considered to have begun. When the Huns arrived, they settled in both Central Asia and Europe, between the 2nd century B.C. and the 20th century A.D. The Huns defeated the Mongolians and secured the trade routes of China, but like all Turkish State’s, its lifetime was comparatively short. The Asian Hun State collapsed and the Gortuk State (552-740AD) was established. The Gortuks urbanised and agriculturalised and it was during this period that the first written texts of the Turkish language were made. The Gortuk State met its demise due to continual struggles with the Chinese on one hand and Turkish tribes within its borders on the other.

The Uiger State (741-840AD) developed as it attached importance to trade. Yet it was these very developments, both culturally and commercially that inevitably led to the weakening of their warlike status and subsequent defeat. As the Uiger State declined, the Karahanid State was founded (840AD). It was during the reign of the Karahanids that Islam was accepted as the official religion. However, it was the Seljuk State (1040-1157AD) that was first successful in establishing Turkish Unity. During this period there were significant clashes with the Byzantine Empire including a single crushing defeat of the Byzantine army.

In time the Anatolian State replaced the Seljuk State, and it was during these times that the First Crusade began. As the Anatolian Seljuk State weakened, the Ottoman Empire was born. Constantinople was captured in 1453AD, thus ending the Byzantine Empire. The Ottomans fought with many of their neighbours and their borders extended to include most of North Africa, the Middle East and Eastern Europe. It was during the reign of Suleyman the Magnificent (1520-1566) that the empire truly developed its state organisation, powerful army and finances. However, military and economic superiority began to decline as the empire failed to adapt to new developments occurring in Europe, and the balance of power shifted in favour of the newly formed European States.

Nationalist movements began in the nineteenth century and Balkan States rebelled, bringing about the birth of independent states within the Ottoman territories in the Balkans. This forced the administration to implement reforms to modernise the country. A group of intellectuals known as the “Young Turks” forced Sultan Abdulhamid to turn the Ottoman state into a Constitutional state. After several wars, culminating in the First World War, the weakened Ottoman Empire, found many of its former states that had allied with Germany, now occupied by allied forces. The signing of the Moudhros Armistice in 1918 left the Turkish people with just Thrace and Anatolia.

The National War of Independence 1919-1923 was fought in an effort to create a new state from the ruins of a once great empire. Other nations seeking to further their own interests by instilling an order suitable for their own requirements, turned Turkish resistance into a full blown war of independence. The man responsible for bringing together the national resistance in 1919, to stop outside nations further dismembering Turkey, was Mustafa Kemal Ataturk. In fact, he is considered to be single handedly responsible for the final collapse of the Sultanate and Ottoman Empire as well as shaping modern day Turkey.

On October 11 th 1922, Turkey signed a treaty with the Allies. On the 1 st November, the Sultanate was abolished. By 1923, Turkey was a Republic and Ataturk was the President. Once his political and military objectives were met, he turned his attention to internal reform. It was his work that laid the foundations for Turkey becoming the modernised society that it is today.

Following Ataturk’s death, Ismet Inonu became President. Inonu was a farsighted Statesman who effectively managed to keep Turkey out of the Second World War. Thanks to his efforts the Democrat Party (DP) was formed in 1946, therefore providing (for the first time), a choice for the people who had always been subject to the rule of either one person or one party.

The DP brought about better standards of living for nearly 10 years, before the party began its decline in 1954 due to economic decline. In 1960 the DP were forcibly removed from power and the National Unity Committee (MBK) took over.

The Military intervened in 1980 and the National Security Council (MGK) took power. Admiral Bulend Ulusu formed a new government, and in 1982 a Public Referendum was held. This marked the beginning of the establishment of a number of new political parties.

In the following years, structural changes were made to the economy and decisive reforms were made, resulting in greater economic growth. Turkey has since emerged in the forefront of the international arena after pursuing diplomatic initiatives during the Gulf Crisis. Turkey has also evolved as something of a role model for several former Soviet Union countries seeking to pursue their own development.

Turkey has since been pursuing full European Membership, but historically poor relations with Greece and a poor human rights record have not helped. Doubt exists over Turkey’s suitability over a number of issues, not least the treatment of the Kurdish minority.