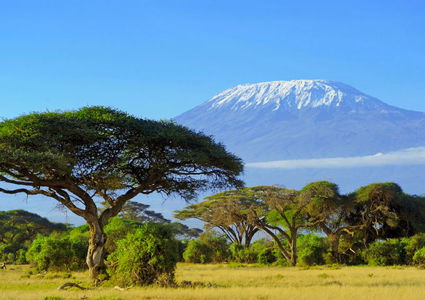 Kenya’s Game Reserves and National Parks are some of the best safari parks in the world. An essential part of any holiday to Kenya, game safaris are an unforgettable experience that you won’t want to miss. Each park has its best time to visit, but most can be enjoyed throughout the year. The Maasai Mara, Tsavo and Amboseli are excellent for wildlife, whilst Aberdares is great for walking safaris and of course Mount Kenya and it surrounding is ideal for the more serious trekker or climber.

Amboseli National Park is located close to the Tanzanian border in the South West of Kenya. Approximately 260 km from the Capital City Nairobi, Amboseli is Kenya’s 3rd most visited park after Maasai Mara Reserve and Nakuru National Park.

Amboseli is renowned for its large Elephant populations but many other animals such as Wildebeest, Zebra and Impala may also be found grazing on the open plains in the shadow of Mount Kilimanjaro. For those interested in Bird-Watching, the areas of Acacia Forest provide a perfect haven for bird life and you may even see the occasional Cheetah roaming in these areas.

The easiest way to access Amboseli would be via Nairobi Airport. Amboseli is around a 3 hour drive from Nairobi.

Lake Nakuru is one of the Rift Valley’s soda lakes and lies in central Kenya around 2 hours drive from Nairobi (approximately 164 km). Nakuru is famous for its Flamingo population which are attracted by the lakes abundant algae. The pink flocks aren’t the only animals who call Lake Nakuru home though, approximately 400 species of bird can be found in the Acacia Forests within the park in addition to a good number of mammals such as – Buffalo, Warthog, Zebra, Dik-Dik, Ostrich, Jackals, Gazelle and more recently Giraffe and Black Rhino have also been introduced.

The easiest way to access Lake Nakuru is via the Naishi airstrip in the south of the park or by road from Nairobi which takes approximately 2 hours.

The Maasai Mara is one of Kenya’s most remote parks (which is one the reasons its wildlife is so untouched), the easiest way to reach the park is by plane from Nairobi which operates a daily service.

This forest reserve is located in Kenya’s Eastern Province, some 350km from Nairobi. The park covers an area of 870km² and it is one of Kenya’s least visited parks, however this shouldn’t put you off visiting. Animals may not be as abundant here as they are in some other parks but the lack of tourists and coaches certainly makes up for this. Many paths remain untrampled and pristine, the many rivers, tall grasses and swamp lands make this park feel otherworldly, almost prehistoric. The park has a wide range of game such as Elephant, Hippopotamus, Lion, Cheetah, Leopard, Black Rhino, Giraffe, and many Antelope.

Meru is most famous as the setting for Joy Adamson’s book “Born Free” – the story of the Adamson’s life and research amongst lion and cheetah. “Elsa” the lioness was the most well-known and her grave is marked here.
The Mulika Lodge Airport serves Meru National Park and this is the quickest and easiest way to travel – flights operate from Wilson Airport.

The Aberdares National Park is located approximately 160km north of Nairobi and covers an area of 766 km². Wildlife is abundant here and you should easily observe Lion, Leopard, Black Rhino, Black & White Columbus Monkeys, Baboon and Sykes Monkey. If you are lucky, you may also see the African Golden Cat (a close relative of the Caracal) and Bongo. For those interested in Bird-Watching, the park is home to over 250 species including the endangered Goshawks, Sunbirds, Eagles, Jackson’s Fracolin, Aberdare Cisticola, Sparry Hawk and Eagles. It is strongly believed among the local Kikuyu population that the Aberdare Mountain Range is home of their Ngai (God). The Aberdares contains many varied landscapes from Streams, Rivers, Waterfalls and V-shaped valleys created by the high mountain peaks surrounding them.

The Aberdares are accessed easily by (good) roads from Nairobi (approx 160 km) or via the Mweiga Airstrip located close to the park headquarters.

All of our safari trips can be easily combined with an extension to one of the beach resorts around Mombasa. Accommodation here ranges from very basic properties through to Luxurious Resorts all offering a variety of options to suit your needs. Whether you are looking for just a room or an Ultra All Inclusive resort style property there’s sure to be something that will suit your needs and budget too.