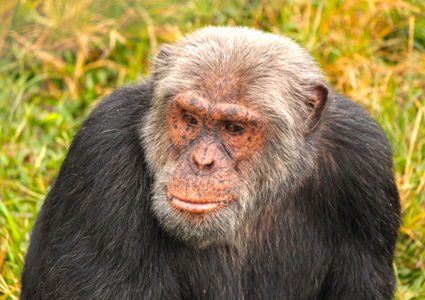 Uganda could be considered a ‘Primate Trackers’ paradise as it is home to 13 different species of diurnal and 6 kinds of nocturnal primate. They can be found in many of the parks throughout Uganda. The vast number of primates sets this country apart from other East African countries such as Kenya and Tanzania, since you can find a much greater variety in one park.

Any visit to Uganda isn’t complete without visiting the endangered Mountain Gorillas and over half of the world’s population can be found here (around 350 of them). Outside of Uganda they can only be found in Rwanda and the Democratic Republic of Congo – generally Mountain Gorillas don’t survive in captivity and therefore you are unlikely to see them in any zoo. In Uganda the Gorillas can be found in Bwindi Impenetrable Forest National Park and Mgahinga Gorilla Park. Bwindi National Park is home to 5 different groups who are all habituated (accustomed to human visitors) and this is from where we run our Gorilla Tracking tours. The Gorillas found at Mgahinga travel back and forth to Rwanda and therefore sightings here are less reliable.
Males gorillas are normally twice the size of the females, they can reach 6 ft tall and weigh between 300-500lbs.
Our guides are often asked ‘are the gorillas dangerous?’ Despite being extremely strong, these giants tend to be gentle and shy – the ones visited in Uganda are habituated too, which means that they are used to human visitors. Dian Fossey was opposed to humans visiting Gorillas as they do today, however it is the money raised from these visitors which helps to keep them safe in the wild. When Mountain Gorillas feel threatened they will attack to protect their own. When different groups of Mountain Gorillas meet then the two silverbacks will often fight until death.

Uganda is home to more Chimpanzees than any other East African country and can be found through the country at Kibale Forest National Park, Kyambura Gorge, Semliki Wildlife Reserve, Budongo and Kanyiyo Padidi Forest near Murchison Falls. You can also find them on Ngamba Island which is also known as ‘Chimp Island’. Here on Ngamba Island you will find mostly orphaned chimps which have been rescued for various reasons; this setting different from the other parks where chimps live in the wild.
Over 5000 chimpanzees can be found in Uganda, however it is said that at one time there were over 50,000 but due to encroachment of villages, trapping of chimps or even being used as target practice during the civil unrest, this number was drastically reduced.
Within the parks and wildlife reserves, chimps are protected and ongoing research into their habits and nature is continually being carried out.
Despite being smaller than man, chimpanzees are up to 5 times stronger. The males weigh up to 150lbs whilst females often don’t exceed 110-115lbs. Chimpanzee group sizes can vary dramatically from 20 up to 100, you will often see (or probably hear them first) them in the trees building nests, playing and sleeping.

Uganda is also home to many other primate species:

Baboons – The Olive Baboon is the only one found in Uganda. You can find them in all parks apart from Mgahinga, Rwenzori Mountains and Mount Elgon.

Blue Monkey – These monkeys are very common in East Africa. You can find this monkey in all parks apart from Lake Mburo and Murchison Falls.

Red-Tailed Monkey – Red-Tailed monkeys are very common in Uganda and in fact you will often find them interbreeding with Blue Monkey’s. You will find them in Kibale Forest, Bwindi Impenetrable, Semiliki and Queen Elizabeth.

L’Hoest’s Monkey – This monkey isn’t often seen my tourists, as it prefers to hide in the dense forest. There aren’t many of them in East Africa but in Uganda you may find them in Bwindi Impenetrable, Kibale and Maragambo Forest within Queen Elizabeth National Park.

Red Colobus Monkey– This social monkey is often found living in troops of up to 50. You will find this monkey within Kibale Forest and Semiliki National Park.

Golden Monkey – Related to the Blue Monkey, the Golden Monkey can be found within Mgahinga Gorilla Park. This monkey is an endangered species.

Black & White Colobus – This beautiful monkey can be found in most forest parks and reserves living in small groups.