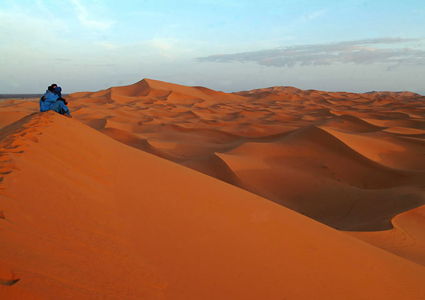 The Sahara, or the ‘Greatest’ Desert, as the locals call it, conjures up images of scorpions, snakes, oases and vultures. The hottest desert on the planet is the size of China, and home to all sorts of unfriendly animals, the most notorious being the Deathstalker scorpion.

With these images in mind it is with trepidation that we head out to spend the night camping in a Traditional Berber camp in the middle of the Sahara. The Berber people are a Nomadic race who dominates much the Saharan Morocco. Traditionally livestock herders, they follow the Sahara’s natural cycle of grazing and water, always on the move.

Taken on the sunset Camel ride up the dunes.

Arriving at Arfoud at the Edge of civilised Morocco we get out of our Mini bus and check into a rather nice hotel, safe in the knowledge that this is only a temporary stop before we board 4x4s and head out to Mezouga and into the real Sahara. After making suitable use of the hotel’s Wifi, air conditioning and creature comforts we board our jeeps ready for the 50km drive out into the wilderness. About 10km outside Arfoud, the road’s all but disappear and we appear to be driving through the featureless landscape in search of the Camp. The drivers seem to know the way, but we’re unsure how as there’s little to aid navigation other than a great expanse of sand, the odd palm tree and the Algerian Atlas mountains directly in front of us.

4×4’s used to get to the beginning of the Sahara.

After about an hour of driving including a few photo stops to take in the vast expanse of nothingness, we arrive at a camp that looks a lot more luxurious than anyone in the jeep had anticipated. Flushing toilets, towels, even a fridge to keep beer cool, and a swimming pool greeted us. This was more than even the most optimistic members of the group are expecting, our tents even had little electric lamps in them.

We are met from the jeep by an exuberant staff member and helped with our bags into a court yard, bottled water is passed round, and we feel instantly comfortable and at one in the desert. The atmosphere is relaxed and there are plenty of Berber’s hanging around enjoying the late afternoon cool sun. After about 10 minutes a group of 15 camel headers appears and, after we have been introduced to our designated beast, we board and set sail into the desert. Camels are notoriously grumpy creatures and mine takes what can only be described as in instant dislike to me sitting on his hump, after a lot of ‘Sqwarking’, and ‘Nurrring’, and a little bit of gentle persuasion from the camel herder he rises and is ready to go. After enquiring the name of my camel I was simply met with ‘his name is camel’ from the herder, there appears not to have been much love lost between these two.

Our not so basic berber camp.

Trekking through the sand dunes you get a great feel of how remote the desert is. Other than the casual banter between the camel headers and the slow plod of the camels there is absolute silence. Nothing! Not a noise. Something which is very hard to come by when you live in the confines of large city! It truly is a magical place. The sun is starting to set when we leave our camels at the top of the sand dune. And we sit watching the sunset without another soul around over this magical desert. One of the herders then whips out a snow board and we then proceed to take turns in the sedate sport of snowboarding down sand dunes. It turns out snowboards are designed for snow, not sand, and they take a bit of coaxing to slide down the deceptively steep sand dunes. With dusk now setting in we board out camels again and return back to the camp. ‘Camel’ has not forgotten his dislike for me and proceeds to make the journey home as uncomfortable as physically possible, ending off with nearly throwing me off backwards when we sits down back at the camp.

Fancy a glass of wine with your sunset?

The same exuberant man then welcomes us back off the camels, and ushers us into a hall for a feast of Moroccan Delicacies, Soup, Tagine, and the infamous ‘Casablanca’ Beer. After dinner and a few beers we are led outside where the local Berber tribe have lit a massive bonfire, and pulled out a couple of drums. A little more beer then appears and a lot of ‘Darbukkah’ bashing, and before I know it I’ve been taught the rhythm to a traditional Berber song. Despite not knowing many words of each other’s language we communicate well through the language of beer and music, a sure fired winner.

It’s easy to forget how remote the region is, and it’s only when you look up to see thousands upon thousands of stars that you remember that you are in the middle of one of the natural wonders of the world. The stars are crammed into the sky everywhere you looked it really was a sight to behold. A cry of ‘Scorpion’ quickly bought us back to our senses. Our brilliant, ever observant, guide Idris, is crouching next to a rock beckoning for us to come and take a look, but at the same time maintain a healthy distance. We got a quick glance before the Scorpions decided they were more worried about us and scuttled away hurriedly into the sand.

The next morning, after an incredibly comfy night’s sleep, we are treated to a staple Berber breakfast of bread and eggs. We board our 4×4’s and headed back out into the civilised world, sorry to say goodbye to our fantastically welcoming hosts, and their Camels.