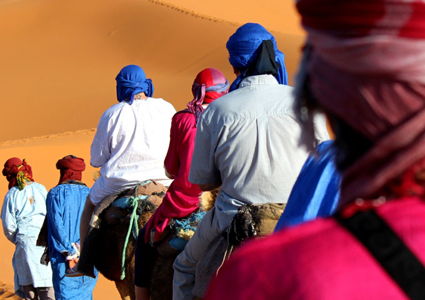 “En route to Morocco. And I’m not talking Epcot (Disney World). Thank you to my husband for holding down the fort so that I could experience the trip of a lifetime!”  With this post that I hastily thumbed onto my Facebook timeline, my journey began. I was sitting on board my Royal Air Maroc flight in New York City and although I could hardly have known it at the time, I really was embarking on the trip of a lifetime.

Being a solo traveler was new to me after having been used to family vacations with my husband and two daughters in tow. I was nervous about meeting new people and traveling to a more exotic location than most people would ever visit in their lives.

Immediately after going through immigration at Marrakech Menara airport, I was greeted by our guides. It was at this point that I met a few of the fellow travelers with whom I would spend the majority of my waking hours over the next few days. Although we came from all different geographies and walks of life, it quickly became clear that we shared a bond with our common love of travel and adventure. After arriving at our hotel, our first impromptu group bonding activity was to get everyone’s smartphones connected to Wi-Fi!

I have generally steered away from packaged tours since they have been stereotyped as regimented, touristy, and rarely give one a chance to venture off the beaten path. I chose this particular tour since I love photography and wanted to explore and “shoot” the diverse landscape and culture that I had only read about in books, in addition to experiencing the thrill of a city like Marrakech.  The itinerary that was presented allowed me meet both goals and quite frankly has changed my view of tours!

Although the destinations highlighted on our trip were exciting to see, what was truly memorable were the unique experiences that we were able to share as a group and that can’t be written into any travel itinerary. The first night, one of the guides took several of us, who were interested, on a walk to Jemaa El-Fna Square, the world famous souk (marketplace) in Marrakech. Seeing it come alive at night was magical. The sight of monkeys and snakes, the feel of a small Moroccan child tugging at my sleeve asking me to purchase a trinket, the sounds of thousands of feet making their way through the crowds as a smoky haze rose from the aromatic kebabs and enveloped the market was nothing short of incredible. The sheer size was more than I had imagined.  There was so much to see that I could have lost myself for hours. And I probably would have, had I not heard the guide raise his voice and shout, “Stay together! You don’t want to get lost!”

The next day, we returned to Jemaa El-Fna square during the afternoon and were given time to explore on our own. A few of us ventured out together with the common goal of exploring and shopping. As we wandered through the winding alleyways trying to find our way back to the main square, I was drawn to the packets of fragrant mint tea displayed in a basket in front of a tiny shop.  The five people I was with were also solo travelers and we had met each other the day before. We christened ourselves “The Circle of Five.”  We were amused by the bottles of Berber Viagra proudly displayed next to the amber and Chanel-scented fragrant bars, saffron, and curry powder in the “Berber” pharmacy, as locals called it. The shopkeeper was an affable young man who persuaded us to enter by saying that we didn’t need to buy anything and that he was a University student who just wanted to practice his English. In very fluent English, his first question for us was, “How much is an iPhone 5 in the U.S.?” Being hospitable, he made fresh mint tea for us that that he served on top of a large flipped over metal can. At first I waved off the sugar cubes that he offered. After a quick sip and an involuntary puckering of the mouth, I proceeded to do what the locals do and dunked several cubes of sugar into the small glass of fragrant tea. I fondly remember it as one of the best mint teas that I had in Morocco.

The day ended with dinner and agreement at a local Moroccan restaurant. Although a vegetarian myself, the kebabs looked so fabulous that I had to take a picture! The belly dancer, with her gyrating hips, was the crown jewel of an enjoyable night of live music and dancing.

The next day we boarded a coach bus to begin our journey through the Atlas Mountains. We travelled through the Tizi N’tichka pass (which is the highest pass in Northern Africa) and arrived at the impressive Ait Benhaddou Kasbah (rock fortress). We scaled to the very top and were treated to amazing views of the surrounding landscape. There are no words to capture the scale of Ait Benhaddou.

Yet another unforgettable experience wasn’t printed on the itinerary. In the town of Ouarzazate, known as the gateway to the Sahara, our guide was able to borrow a guitar for one of the young men on our tour and, with the instrument in tow, we took off for the town square in Ouarzazate. Our group sat on the steps, singing and enjoying the night air, while local Moroccan kids, who initially observed us shyly, began to dance freely around us. They were as intrigued by us as we were of them.

As we continued traveling up and down the changing elevations of the Atlas Mountains we were welcomed with amazing views, each more magnificent than the other. It is truly a landscape photographer’s paradise. The Todra Gorge, Tasseurte, Erfoud, so many beautiful places. Several of these locations offered us chances to immerse ourselves in the local culture and experience Berber dancing, cooking our own tagines and watching artisans make local handiworks.

“Tsk…tsk….tsk.”   “What, you may ask, is that?” Well, that sound is the first thing that you hear when you wake up in a Berber tented camp in the Sahara desert! It’s the sound you hear as you gently brush the sand that has slowly fallen during the night, forming a thin gritty layer on your face. The Sahara desert was one of my favorite experiences and the spectacular combination of sky and sand provided yet another dream location for a photographer. We started by leaving our buses and boarding 4×4’s that would take us to our tented Berber camp in Merzouga. It was a thrill to be part of a caravan of 4×4’s that raced each other over the rapidly changing terrain. As the miles flew by, paved roads slowly became rocky flat landscape, which then made a dramatic final transformation to brownish-orange sand. We had the added excitement of getting stuck on a small sand dune and needing another 4×4’s help to be towed out. After arriving at our camp after the slight delay, we were ushered onto camels for a sunset camel ride. Lugging my clunky camera and with my gear bag strapped onto me, I made for an interesting figure in the desert. One hand clutched my camera, trying to protect my lens from the sand, while the other white-knuckled hand held my camel’s reins in a vise-like grip while my guide half pulled, half guided my camel up to the top of the sandy dune that loomed ahead of me. Occasionally he would stop for me to reposition myself as I slipped precariously off the camel’s hump due to the weight of my gear or needed to snap a photo. It must have been amusing. I can’t complain. It was a gorgeous sunset!

The only thing better was waking up at 5 am with a couple of fellow travelers to hike out into the desert to patiently wait for the glorious sunrise, which was another amazing experience. Writing my kids names in the sand was an added bonus!  It lies there imprinted forever, or at least until the next sandstorm! Tranquil, serene, beautiful…

On the last day of our tour, about half of our group opted to go to the coastal town of Essaouira. The landscape and vibe here is a far cry from the elevation of the Atlas Mountains, the sandy terrain of the Sahara desert and the hustle and bustle of the crowded marketplaces of Marrakech. Today, it is a laid-back beach town, which is in sharp contrast to its history as an 18th-century fortified seaport town. You can still see the ramparts with ancient cannons that protected this fortress town along the esplanade. The medina (old city) itself is picturesque with distinctive Moroccan blue shutters and doors that frame and accent almost every building. Hundreds of brightly painted blue boats are anchored on the dock and form a sharp contrast to the fishermen tinkering with their vibrant red fishing nets. Leisurely walking through the colorful souks in Essaouira was a fitting end to an incredible journey.

As I reminisce about the trip and peruse through photos, I realize that not only do I have many memories to cherish; I also have the desire to visit even more faraway places. I leave you with the refrain from the French/Arabic song by Cheb Khaled that became an anthem for us on our tour bus. “C’est La Vie!” With experiences like this I can’t complain, it really is a good life!