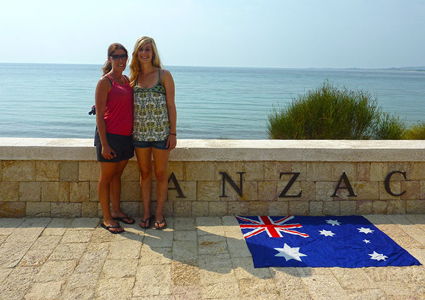 Almost 100 years ago today marks an infamous day in history for our Australian and Kiwi friends. Today is ANZAC day, which is commemorated on the day that the Australian and New Zealand Army Corps found themselves on a beach far from home, fighting for the freedom of their colonies with the hopes of an independent future.

ANZAC is commemorated on the 25th of April which marks the morning that the troops arrived at the Gallipoli Peninsula in Turkey during WWI. This day is now honoured each year by  between 5000 and 20000 Australians and Kiwis who see the day as a sort of pilgrimage, a way to show their appreciation for the thousands of soldiers who died for their countries not only at this site, but through all wars and battles  through their history.

This year marks the 97th anniversary, which means that 2015 marks the centenary and is expecting to draw crowds of well over 20,000 people! If you would like to be part of this 100th anniversary, we recommend that you start planning soon as tours are already filling up.

If you want to avoid the huge crowds of Anzac day and want to pay your respects in your own time, all of our Turkey tours visit the Gallipoli   Peninsula, where you can visit the memorials and museums at any time of year.

In 1934, Kemal Atatürk delivered the following words to the first Australians, New Zealanders and British to visit the Gallipoli battlefields. This was later inscribed on a monolith at ANZAC Beach.

“Those heroes that shed their blood
And lost their lives.
You are now lying in the soil of a friendly country.
Therefore rest in peace.
There is no difference between the Johnnies
And the Mehmets to us where they lie side by side
Here in this country of ours.
You, the mothers,
Who sent their sons from far away countries
Wipe away your tears,
Your sons are now lying in our bosom
And are in peace
After having lost their lives on this land they have
Become our sons as well.”