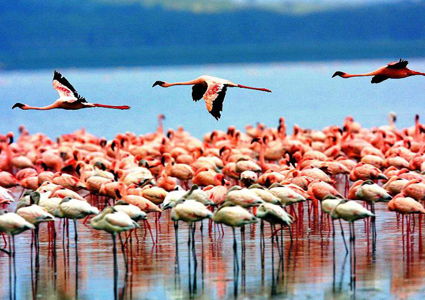 It helps to remember that Tanzania’s name is two old African states spliced together. Back in the ’60s, Tanganyika and Zanzibar united to form the ‘United Republic of Tanganyika and Zanzibar’. Later in 1964 they trimmed it down to the handier, ‘United Republic of Tanzania’. Rising from the republic’s Maasai landscape to lure climbers, snow-capped Mount Kilimanjaro is Africa’s highest mountain, and the Ngorongoro Conservation Area protects its dead volcano-crater.

Tanzania’s massive Serengeti National Park is a continuation of Kenya’s Maasai Mara National Reserve. Between July and October every year, nearly two million wild animals leave these southern Serengeti plains and charge 2,897km to the Maasai Mara. This ‘Great Migration’ involves 1.3 million wildebeest, 97,000 topi, 18,000 eland, 200,000 zebra and 500,000 Thomson’s gazelle. It’s a never-ending vicious circle of a route for these animals – all desperate for grassy grazing lands and wet water-holes. And every year an estimated 250,000 wildebeest don’t make it as they fall prey to lion and hyena. Then, during November and March, the herds charge all the way back here again to calve.

One of the most naturally diverse country’s; Tanzania provides ideal habitats for elephant, antelope, lion, cheetah and leopard, and 1,500 species of bird. Lake Manyara lies in the shadow of the Great Rift Valley, whose burnt red escarpment-walls loom 600 metres over the eastern horizon. With waterfalls spilling down cliffs nearby and some hot springs bubbling, Lake Manyara sometimes gets blurred with heat-haze. But this environment and microclimate attracts birdlife like crazy, and its banks, shore and wider terrain support numerous animal species.

Lake Manyara National Park must be accessed by road; through Mto wa Mbu – a market village with a mix of converging tribes. If you’re visiting for game-viewing, the best period is from July to October. But if your passion is birdlife, book your trip during Kenya’s rainy-seasons. The short rains are from November to December when it becomes hot and humid; the long rains are from March to June. This long rainy-season is best for all things watery – from bird-watching to canoeing.

Check out our Tanzania tours or email tours@encounterstravel.com for more information.