The Palaces of St Petersburg 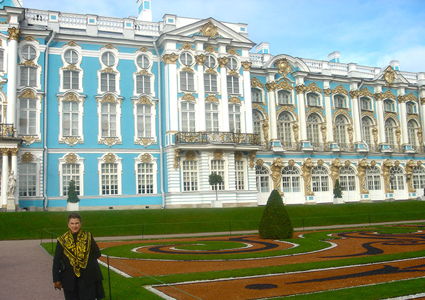 He stood on the fortress of Nyenskans in Nven-town. Below him was the neck of the Neva River in the Gulf of Finland, and Tsar Peter the Great of Russia was pleased with himself. He’d just conquered this part of the Swedish Empire – Swedish Ingria. To celebrate, he renamed Nven-town and called it Schlotburg – which meant ‘Neck-town’. But Tsar Peter had much bigger plans for where ‘Neck-town’ stood – a brand new capital city! So, after tons of demolition work, in 1703 Saint Petersburg was staked out to be built on the rubble of ‘Neck-town’.

Tsar Peter greatly admired classically-inspired architecture in the west, so he set his standards to be “a window to Europe”. Tsar Peter chose the Flemish renaissance for his architects’ theme; and among many buildings on their drawing boards, a ‘winter’ palace was included. Tsar Peter’s first royal residence in Saint Petersburg was actually a humble log cabin, ‘Domik Petra l’. It was lashed together in 1704 as a kind of glorified building-site office. Work nearing an end, in 1711 it was dismantled and removed to the Petrovskaya Embankment – where you can see it today.

Soggy marshland was drained, and Saint Petersburg was built by over 40,000 serfs in biting frost and sub-zero temperatures. Tens of thousands of serfs died – many daily – others tried to escape the freeze of the Finnish Gulf. But each victim was instantly replaced by another. Tsar Peter’s Winter Palace took a year to build, and like much of the rest of early Saint Petersburg, it was finished in 1712.

In 1730, Francesco Rastrelli designed and built the capital’s first ‘summer’ palace for Empress Anna on Tsaritsa’s meadow. Problem was – it was built out of wood. So when Elizabeth became Empress in 1741, she told Rastrelli to demolish that woodpile and build her a proper “Venetian-style” Summer Palace – out of bricks. It was completed in 1744.

The Summer Palace was inherited by Empress Catherine the Great. Under her rule, more palaces were put up in Saint Petersburg than anywhere ever – before or since. In 1762, Catherine the Great moved her court to a brand new Winter Palace which was, from 1732 to 1917, the official residence of the Tsars. Situated next to where Tsar Peter’s first Winter Palace stood, today’s 18th-19th-century State Hermitage Museum-Winter Palace is the 4th Winter Palace. And the famous ‘Storming of’ it in October 1917 was a major part of the Russian Revolution.

Today, The State Hermitage Museum-Winter Palace is Saint Petersburg’s main attraction; it displays highlights of a 3-million-piece collection of Russian art and culture. Walk its galleries and you’ll see works by Rembrandt, Da Vinci, Michealangelo, Reubens and other greats – part of the largest collection of paintings in the world.