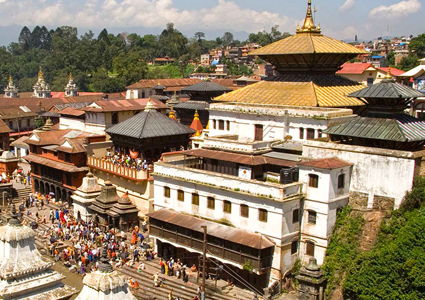 Landlocked 2,000-year-old Nepal is surrounded by China and India. About 50 million years ago, slow-moving tectonic plates first crashed together, and the Himalayas began to grow as high as mountains.

Today, tectonic plates still push hard, and the Himalayas continue to grow 1 cm taller a year; that’s 10 km-per-million years!  Near to Nepal are 8 of the world’s 10 tallest mountains – including the highest, Mount Everest.

Kathmandu and its two neighbouring cities, Lalitpur and Bhaktapur, have grown in a bowl-shaped hollow in the Himalayan Valley. Nepal’s capital, Kathmandu, is incredible. You know that you’ve reached somewhere really special as you walk through its crowded streets of traffic, rickshaws, street vendors and busy Nepalese.

Hinduism is practised by a larger majority in Nepal than in any other nation. However, Buddhism has a far greater background history in Nepal. Surprisingly, many Nepalese don’t really distinguish between Hinduism and Buddhism – they follow both.

An ultimate destination since the 1960s, Kathmandu feels like it’s rushing into the modern world, while it’s not quite ready to escape its past. The busy streets have internet cafés and fast-food outlets, but if you go off-track and head for the back lanes, you’ll find peaceful courtyards and temples among golden marigold bushes.

Walk into Durbar Square (Hanuman Dhoka); a beautiful complex of palaces and temples that were built by the Malla Kings between the 12th and 18th centuries. This is the religious and social centre of Kathmandu. Here, enjoy visiting the Taleju Temple, the statue of King Pratap Malla, the Big Bell and Big Drum, and the Jagnnath Temple.

The Monkey Temple (Swayambhunath Stupa) is one of Nepal’s best-known Buddhist shrines. Monkeys watch and dart around their golden spire – all are thought of as holy.

Another amazing place to visit is the Balaju Water Garden, 5 km northwest of Kathmandu. Here are beautiful religious shrines, fishponds and waterspouts carved in the shape of sea-dragons.

Kathmandu is an ideal destination for the energetic trekker. If Mount Everest seems too tall an order, the region is full of relaxing, easy treks that lead you from one peaceful village to another. Walk beside river paths and through rice terraces – all guarded by the snow-topped Himalayas. It’s a region of old and new, where Kathmandu has so much to offer the adventurous traveller.

Take a look at our Nepal tours.