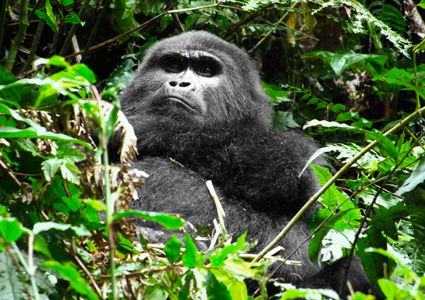 Where: There’s a saying in Uganda: “Be careful what you drop, because everything will grow!” and the rich red soil and vivid green plant life carpeting the country are testament to this. It’s a nature-lover’s dream, being home to the source of the Nile, ‘Big Five’ wildlife and mountain gorillas, the now extremely endangered gentle giants living in the country’s rainforest. With only around 650 left in the world, visiting the human-like primates is the ultimate wildlife adventure as well as a meaningful way to help support their future on earth.

What: The sunrise drive through West Uganda’s misty mountains into the rainforest is breathtaking in itself, and once I reached Bwindi Impenetrable Forest where the primates roam and rest, I understood how it got its name. Led by rangers, I trekked deep into fierce fauna, clambering over vines and crawling under canopy, potentially heeding heavy rain for what could be numerous hours. But this all pales into insignificance at that heart-stopping moment when I saw a family of the rare mountain gorillas. The following hour observing and processing what unfolds mere metres away from me was one of the most humbling of my life.

How: The best way to tackle the ‘bucket list’ tick is on a tour. Encounters Travel’s Gorillas & Plains group adventure makes things hassle-free and fun-filled. Not only do you get your magic moment with the mighty knuckle-walking apes but aboard a super-sized tour truck with other travellers, experienced guides uncover Uganda’s ultimate hot spots for you. It actually begins in neighbouring Kenya where, before crossing the border, I visited magnificent wildlife in the Masai Mara game reserve. Subsequent stop-offs include Lake Bunyonyi, a relaxing retreat ringed by picturesque mountains; Queen Elizabeth National Park, home to the elusive tree-climbing lions; Jinja, where you can raft the world class white-water rapids of the river Nile, and Kasinga Channel which (aboard a sunset cruise) offers close-ups of crocodiles, hippos, elephants and exotic birds. You also get to soak up the sight, sounds and smells of East African life in the country’s chaotic capital Kampala before returning to Nairobi in Kenya for your flight home.

Why: By tracking gorillas on a tour, you’re not only experiencing the wildlife wonder of a lifetime, but you’re contributing towards their conservation. The gold-dust-like permits cost a weighty $500 (£329), but go towards protecting the primates and the education of local communities against poaching.

Cosmo loves: Cherishing the forever-memorable sight of a mother gorilla grooming her baby, indulging an inquisitive youngster showing off for the cameras (and shuddering at a silverback playfully charging towards me!).

Do it! Encounters Travel’s Gorillas & Plains Tour costs from £1235 for 15 nights on a mixed-board basis, including airport transfers from/to Nairobi, an experienced local guide and private transportation throughout. Gorilla tracking permit excluded.