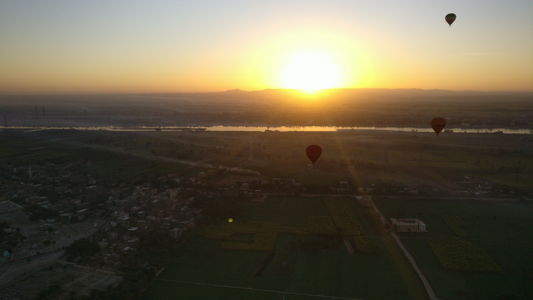 Encounters Travel’s Jarred Manasse recently went hot air ballooning over the Egyptian city of Luxor, which is often dubbed ‘the worlds greatest open air museum’. Find out about his experience below!

Hot air ballooning has always been on my bucket-list. When I saw that it was an optional activity of my Discover Egypt tour with Encounters Travel, I knew that I’d probably never have a better chance to tick it off. 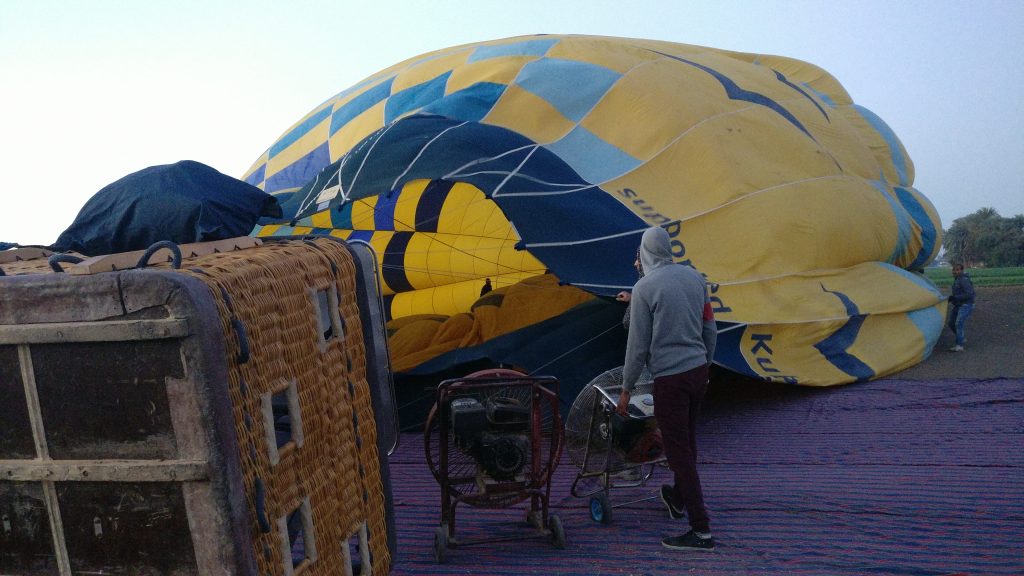 Our day started early, which is understandable, as it is a sunrise hot air balloon ride after all. Since we were going to miss breakfast at the hotel, we were given breakfast boxes filled with a selection of meats, breads, fruit and a juice to eat along the way.

We boarded the bus and our guide gave us a quick rundown the morning’s itinerary. It wasn’t long before we stopped at the banks of the Nile River, to board a boat which took us to the other side. Tea and coffee were served, before our hot air balloon pilot joined us to chat about the landing procedures and what we can expect to see once we’re in the air.

Once we reached the opposite bank of the Nile, we disembarked and hopped onto another bus, which took us to the take-off point. I should point out that it was here when the butterflies started to flutter in my tummy.

I knew the balloons were big, but it came as quite a surprise at just how big they really are! There were probably more than 15 balloons all being filled with the warm air of consecutive blasts of fire and it wasn’t long before we got the call to get ready to hop into the basket.

The basket itself resembled a human-sized straw picnic basked, split into five different sections: four for the passengers and one for the dapper-looking pilot, who was definitely a hit with the ladies in my section of the basket. Inside the basket were loops of rope, which are to be used during take-off and landing procedures – which were quite simple actually: squat down during both take-off and landing until the pilot tells us to stand up.

The views were incredible. Below us we could see the Nile River winding its way through the countryside, the lush green sugar-cane fields and in the distance, the Valley of the Kings and the famous Mortuary Temple of Queen Hatshepsut.

I was told that the hot air balloon flight lasted for about an hour, but the time flew so fast! I guess I was having too much fun to look at the watch!

Fifty minutes in, we were told to get ready to land in a clearing within a nearby sugar cane field. Once again, it was time to squat and brace for touchdown.

The landing was very gentle. Our basket kissed the ground three times, before we came to a steady halt, which was greeted with cheers (and relief) from the passengers on board. We waited a while before we were given the green light to exit, as we waited for the warm air to exit the towering balloon above us, which slowly deflated and flopped beside us.

We finally managed to climb out of the basket and each one of us were given a flight certificate as proof that we braved the skies above us.

Would I do it again? Without a doubt. Its an experience which I’ll never forget!