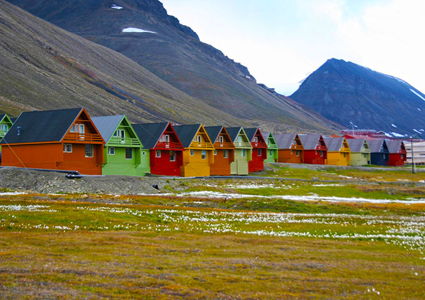 Longyearbyen is the gateway to the Arctic and starting point for many cruise based expeditions operating in the chilly polar waters. It’s beautiful natural setting and interesting history make it worth spending a little time exploring.

Longyearbyen is the largest settlement on the Norwegian Svalbard Archipelago, and is considered the gateway to the Arctic. It is serviced by the nearby Svalbard airport and makes a great base from which to start exploring this remote part of the world. Its permanent population is only around 2,000 but this swells considerably during the summer tourist season.

The town is named after American John Munro Longyear (1860-1922), who was head of the Arctic Coal Company and founded the town and nearby coal mines. Mining plays a big part in the history of the area and continues to do so today, along with the ever growing tourist industry.

Longyearbyen is situated on the west coast of Spitsbergen, largest island in the Svalbard Archipelago, at the southern side of Adventfjorden, in the mouth of the Longyearelva River. It consists of a sprawling collection of brightly coloured wooden houses, several hotels & restaurants, a couple of museums and a church. The surrounding area is littered with old mines and derelict mine buildings.

There is a range of accommodation option available from the more expensive Radisson Blue Polar and Spitsbergen hotel down to Mary-Ann’s Polarrigg bed & breakfast. There are also a number of restaurants available including Italian pizza, Thai cuisine, and local reindeer dishes. Drinking establishments include Kroa Bar, Nordpolet, and Svalbar, all of which offer relatively cheap tax free drinks. The local post office has an ATM and currency change facilities.

Other interesting sites to visit in the town include the Spitsbergen Airship Museum, which showcases the history and importance of airships in Arctic exploration; and the Svalbard Museum, which charts the human history of the archipelago, and in particular whaling and mining, along with various exhibits about arctic flora and fauna. Svalbard Gallery is also worth a visit, displaying the work of various local artists, and the local church, the world’s most northerly, makes and interesting visit.