Wildlife of the Arctic 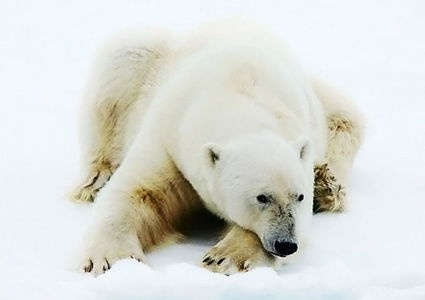 The landscape of the Arctic islands of Spitsbergen, Iceland and Greenland is one of permafrost that in place is permanent and in other gives way briefly during summer to a largely marshy, poorly drained soil. Temperatures can vary widely from bitingly cold sub zero temperatures in the winter to as high as 30o C (86o F) in the summer. Plants and animals have adapted to the large changes in temperature and the meagre resources available at such high latitudes to carve out an existence in this harsh and unforgiving terrain. On land mosses and lichen are abundant whilst the polar waters are rich in invertebrates, particularly during the summer month, when vast quantities of zooplankton fuel the summer influx of birds and whales.

Polar bear
The polar bear is perfectly adapted to life on and around the pack ice. Weighing as much as half a ton and standing more than ten feet tall they are extremely dangerous and at times very aggressive. It is well insulated by a thick layer of blubber and a dense underfur and outer layer of transparent guard fur. Its large fur covered paws provide excellent traction on the ice, help distribute load while walking on snow and enable it to swim very well. They have been spotted swimming over fifty miles away from any land or ice. Their main prey is bearded and ring seals though they will attack other animals, including humans, when driven by hunger. Breeding takes place between April and June with one to three cubs being born every 28 months. Female bears dig dens in the snow in October and November and give birth in December. At one time heavily hunted and heading towards extinction, there are now believed to be around 3,000 – 5,000 in Svalbard.

Beluga whale
The word beluga derives from the Russian word bielo, meaning white. The white colour of these whales can take up to eight years to fully develop from the dark grey colouration of juveniles. They can grow up to 5m in length and are very sociable, living in pods ranging from a few individuals to several hundred. They are toothed whales feeding mainly on fish and crustaceans.

Orca whale
Also known as killer whales, the orca is the largest member of the dolphin family. Males can reach 9m in length and weigh more than 6 tonnes. Their distinctive black and white markings and large dorsal fin make them easy to identify. They feed on marine mammals, fish and birds and travel in pods of up to 50 individuals.

Blue whale
The blue whale is the largest whale and also the largest mammal on the planet. It is from the baleen family of whales, which means it feeds by filtering small crustaceans (krill) from the sea using fibrous plates (baleen) that line its jawbones. The largest recorded blue whale was 33.5m and probably over 200 tonnes in weight. A single blue whale can eat as much as 4.5 tonnes of krill in a day. They tend to be either solitary animals of travel in pairs.

Humpback whale
Humpback whales are usually black and can be recognised by their enormous flippers, which can grow to a third their total length. Reaching a length of 20m, they can weigh as much as 40 tonnes. Members of the baleen family like the blue whale, humpback whales filter feed on krill. Once grossly exploited by whale hunters, they are now fully protected.

Minke whale
Minke whales are by far the most populous of southern ocean whales and population estimates are as many as 500,000. Relatively small at around 10m and 9 tonnes, they are black/grey in colour and fast swimmers. Like blue and humpback whales, the minke whale is a baleen and feeds on krill.

Other whales
Other species of whale found in and around the Antarctic include the Fin, Sei, Bowhead and Narwhal.

Harp seal
Adult harp seals are dark grey in colouration and a very common species of seal in the Arctic, particularly Greenland. Fully grown, they can weigh as much as 150kg. Adults spend most of their time in the water feeding on fish and crustaceans, including salmon, herring, crab, krill, shrimp, octopus, flounder, cod, anchovy and squid. Pups are raised on the ice where they are extremely vulnerable to predation hunting by man.

Hooded seal
The hooded seal is the largest species of seal and can weigh up to 400 kg. The seal is named after the inflatable, cap-like bulge on the forehead and nose of the adult males, which they can inflate when angry. Their colouration is silvery with scattered dark, irregular marks. The skin from the hooded seal was used in the past to cover kayaks. The hooded seal can live to an age of about 30 to 35 years.

Ringed seal
The ringed seal is the smallest and most common seal in the Arctic growing to around 1.5m in length and weighing up to 100kg. They have plump bodies covered in dark fur with silver rings on their back and sides and a silver underbelly, small head and short cat-like snout. They live mainly around fjords where there are ice fells and in areas where the sea freezes in winter and feed on fish and crustaceans.

Other seals
Other species of seal include the bearded seal and the common seal.

Walrus
The walrus is a very distinctive marine mammal, which is easily recognisable by its massive bulk – 3 meters in length and 1000kg in weight – and its impressive tusks. Its tusks can grow up to 50cm in length and are used as a useful tool, for example when hauling itself up onto an ice floe, and for protection from attack by polar bears and killer whales. They generally stay close to the edge of the sea ice or on drifting ice floes where they dive down to feed, using their tusks to scrape the seabed in search of mussels and molluscs. Hunting for walrus tusks almost brought the species to the point of extinction, but they are now fully protected under international law, with only limited and controlled hunting allowed.

Arctic fox
Arctic foxes are common and most abundant along the coast, though they wander freely over the sea ice. During the winter their coats are white, whilst in summer they change to a brownish grey in summer. Their compact body, short legs, short ears, dense fur, and thickly haired foot pads, which insulate against the cold and provide traction on ice, make them perfectly suited for the freezing Arctic climate. Mating occurs in early March and early April and litters average around six or seven pups but can be as large as fifteen. Most of their food comes from seabird colonies and from carrion washed up along the shoreline.

Reindeer
A larger relative of the deer, this remarkable animal has adapted itself to the harsh and barren Arctic landscape. It is an excellent swimmer and its thick coat traps air giving added buoyancy in the water, allowing it to cross large bodies of water. Reindeer herds can vary from a couple of dozen up to thousands and are almost constantly on the move in search of food. They eat a wide variety of plants during the summer months, but the bulk of their diet consists of lichens and tough grasses found across the tundra. In winter months they dig through the snow to find the lichens and mosses beneath. Reindeers mate between September and November. During the rutting season males become very aggressive, fighting with each other to gain control over harems of up to fifteen females. Calves are born in May and June and can stand within minutes of being born.

Musk ox
The musk ox is a large cattle like animal that is more closely related to sheep and goats than to oxen. Their name comes from their strong musky odour omitted during mating, and they have large hooves, broad curved horns, and a thickly insulated dark brown hair that hangs almost to the ground. They have a stocky build and a pronounced shoulder hump. Their diet is similar to reindeer and consists of grass, lichen and mosses. They live in smaller herds of between ten and twenty individuals and mating takes places during August and calves are born in April and May.

Arctic hare
The arctic hare lives on the tundra and has a thick, pure white coat that camouflages it against the snow during the winter. During the summer the coat changes to a greyish brown in colour. They have very acute hearing even though their ears are small to help conserve heat. Their large feet and toes help them to travel easily on the snow. They eat mostly willow leaves, shoots, bark and roots along with other small plants. Females give birth to between four to eight babies, known as leverets, which can run within a few minutes of birth. The arctic hare is a vital source of food for other animals such as arctic fox, polar bear, wolves and birds of prey.

The Arctic is seasonally home to some of the largest seabird populations in the world. When the snow starts to melt hundreds of thousands of birds arrive to breed, nest, raise young and feed on Arctic plants and insects. These include seabirds, shore birds, waterfowl, song birds and many others. Many nest on the rocky cliffs or along the shore, with others nesting in the grass or on the ground. Migrating birds arrive in May and early June, leaving again in the autumn to winter in warmer climates. No less than 183 species of birds breed in the high latitudes, taking advantage of the short but but insect abundant summer season. Year round residents of the arctic include ptarmigan, arctic tern, raven and snowy owl.