Places to Visit in Turkey 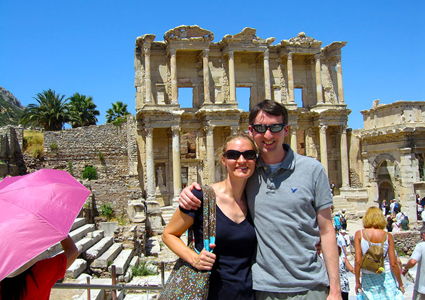 One of the leading tourism destinations in the world, Turkey effortlessly combines the old and the new perfectly – the country boasts stunning scenery, a rich history, diverse landscapes, beautiful coastlines and vibrant cities and has a great deal to offer the discerning traveller. The huge variety of Turkey tourist attractions means that there is something for everyone, from UNESCO World Heritage Sites to cosmopolitan cities, wide sandy beaches to bustling thriving bazaars, and trips to Istanbul, the vibrant capital, are an essential part of any tour of the country. As the historical capital of the Ottoman, Roman, Latin and Byzantine Empires, the city boasts a dazzling array of attractions, palaces and mosques, as well as vibrant bazaars including the world famous Grand Bazaar and Spice Bazaar. Trips to Istanbul are the most popular among foreign tourists, and with good reason, but the country has so much more to offer outside of this incredible city.

There are so many places to visit in Turkey it can be hard to know where to start. Cultural tours of Turkey are especially popular, given the rich wealth of history and ancient sites that dot the landscape, and the country boasts more archaeological sites than anywhere else in the world. Ephesus, Anatolia, Cappadocia and the City Of Troy are just some of the key places to visit in Turkey that offer a real historical significance while also giving visitors a real sense of what life may have been like in the ancient past. Cultural tours of Turkey often include travelling along the ancient trade routes to the WWII sites at Gallipoli, the ancient city of Troy which lay undiscovered until the mid 19th century and the Roman site of Ephesus which is regarded as one of the best preserved ancient cities in the Mediterranean, not to mention the beautiful landscape of Cappadocia, a fairytale setting of underground villages and incredible rock formations which is frequently cited as one of the most important Turkey tourist attractions.

Cultural tours of Turkey will almost always be paired with trips to Istanbul but it is important not to forget the incredible beaches when deciding which places to visit in Turkey. The southern parts of the country boast nearly 6 months of summertime and the sandy beaches along the Mediterranean and Aegean coastlines with their sparkling turquoise waters are a must-see for any sun, sand and sea worshippers – Antalya and Bodrum are especially popular. Turkish baths and spa treatments are also big draws for tourists who want to relax after shopping in the bustling markets and bazaars. Don’t be afraid to haggle! Turkish cuisine is a fusion of east and west offering wonderful mezze, fresh fish and the ubiquitous Turkish coffee.

Technically Turkey has seven distinct climatic regions but the most important considerations for tourists are the differences between the coastal and inland regions – the coastal areas have hot and humid summers and mild winters, whereas inland the winters are much colder and the summers are often very hot indeed but less humid. The best times to visit Turkey are Spring (April – May) and Autumn (September – October). If you visit in the summer we advise that you avoid the east of the country where temperatures can reach an uncomfortable 45 degrees! The best time for the beaches along the Aegean and Mediterranean coasts is between May and September. Flights are usually to Istanbul although there are also airports in Antalya, Bodrum and Dalaman.

At Encounters Travel, we are passionate about travelling in Turkey and offer several tours to the region no matter what your personal priorities are. From our 8-day Taste of Turkey to our 15-day Turkey Encounters tour, all of our group tour departures include your accommodation, transfers and meals as indicated. To learn more about Turkey tourist attractions and the types of trips we can organise for you, or to book onto one of our specific Cultural tours of Turkey, please don’t hesitate to get in touch.