Why you should visit Cambodia in February 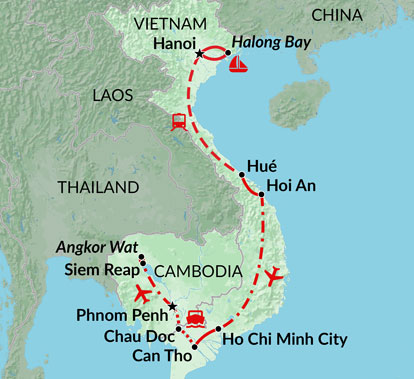 Cambodia has it all - from enchanting landscapes to its rich history and culture and the innate hospitality of its locals.

However, there are two main reasons why you should visit Cambodia: (1) it offers an incredible amount of history and culture; (2) its nature is amazing: it ranges from the gorgeous National Parks to the relaxing islands.

Here's why Cambodia shouldn't just be on your bucket list but why the month of love - February - is the best time to go!

The weather in February tends to be long and dry making it more enjoyable for time spent and the incredible Angkor temples and exploring the northeast regions of Mondulkiri and Ratanakiri.  Although afternoon shade is still needed every now and again.

Along the south coast and on the sands of Koh Rong, Sihanoukville and Kep you can expect dry, hot weather - February offers perfect conditions for diving especially around the tropical islands of Koh Rong and Koh Rong Samloem.

In the Cardamom and Tatai region, you can also expect undisturbed blue skies and sunshine as well as in north Phnom Penh, Battambang and Siem Reap Province.

Places to go and things to see

Angkor Wat is not only one of Cambodia's treasures and archaeological gems but also the largest religious monument in the world and is designated a UNESCO World Heritage Site.

When you visit Cambodia, Angkor Wat is a must-see site - it was built in the first half of the 12th century in the reign of King Suryavarman II, which dedicated to the Hindu religion.

Angkor Wat occupies a rectangular area of approximately 500 acres. It was built to the model the universe, tallest tower of Angkor Wat represented Mount Meru.

It is believed that the carvings on the wall feature legendary stories such as the Battle of Kurukshetra, the Churning of the Ocean of Milk, wars between the Khmers and its enemies, and so on. There are also a lot of sculptures, devatas, and statues, which are the symbols of Hinduism.

While the masses flock to neighbouring Thailand's islands, Cambodia's alternatives are often wrongly forgotten - making them unspoilt options with the majority maintaining their authenticity and remaining off the mass tourism map.

If you want to completely get away from the party vibe then Koh Ta Kiev is the perfect destination, with no wifi and no electricity - just gorgeous beautiful beaches and bamboo huts.

The capital city of Phnom Penh will make you feel like putting a pause to time!

Cambodia has seen its darker days during the 1970s when thousands of people were killed recklessly. The Tuol Sleng Genocide Museum and the Killing Fields, and if you wish to take a deeper look into the country's history, then you have to visit these places.

Apart from that, you can also explore the Silver Pagoda, also known as the Temple of Emerald Buddha and the National Museum of Cambodia.

A riverside town in the south of Cambodia - It's quickly becoming a popular spot with travellers with many riverside guesthouses popping up.

The area is famous for the production of pepper and durian, a fruit that divides opinion and is so strong-smelling it's banned from most public transport.

The Kampot pepper is considered some of the best in the world and you can visit a pepper plantation to see how it's grown.

The former colonial resort town of Kep is located close to the Vietnamese border in the south of Cambodia - once a wealthy spot for the French elite.

Kep is slowly returning to its former glory, and luxury retreat Knai Bang Chatt has restored some of the old villas into beautiful hotel rooms in a stunning beachfront location.

The hub of Kep is the bustling crab and fish market, a great place to try the regional speciality - Kep crab with Kampot pepper.

Cambodia is home to an abundance of wildlife.

Phnom Tamao Rescue Center, on the outskirts of Phnom Penh, boasts an array of animals that have been rescued from the likes of poachers and illegal trade - they rehabilitate the animals before releasing them back into the wild - the centre has tigers, elephants, sun bears, gibbons and many other animals.

Sam Veasna Center offers a range of birding and wildlife tours in Siem Reap province, and travellers will find elephant sanctuaries in Mondulkiri.

Plus, various treks through the Cardamom Mountains showcase the country's unique flora and fauna.

Rumble in the jungle

The Cardamom Mountains, which sit in the northwest of Cambodia, are one of Southeast Asia's most species-rich and intact natural beauties the country has to offer.

While trekking through the dense jungle remains relatively off many tourists to do list - for now - although a rising number of tours take visitors camping, kayaking, cycling and hiking through this unique tropical jungle.

When in Cambodia get your haggling hat on and head to the nearest market. Markets are a way of life in Cambodia - bustling early in the morning as people clamour to buy the freshest foods for the day.

At the Russian Market, Central Market and BKK1 Market in Phnom Penh you'll find everything from clothes, souvenirs, music and DVDs to food, household goods and vehicle parts.

In Siem Reap, Angkor Night Market and the Old Market are hot spots.

The local food is a must-try when in Cambodia!  The food experience that you get after a visit to Cambodia will forever mark a place on your taste buds.

Cambodian food contains a lot of ingredients like bananas, limes, and lemongrass. Moreover, in order to enhance the flavour of dishes a lot of spice is used. Every meal is usually served with rice - there is a wide variety of rice, such as jasmine rice, brown rice, and white rice.

Fish Amok is Cambodia's most famous dish - a sweet fish curry that has coconut milk, basil, mint, lemongrass and other ingredients and is always presented in a banana leaf bowl.

Somlor Korko is a traditional soup dish, which is often considered as one of Cambodia's national dishes - this dish consists of many Cambodian spices, such as ginger, lemongrass, turmeric and a lot of vegetables, including papaya, banana, and eggplant.

Cambodia is a must for every traveller's bucket list so don't hesitate to add it to the top of your list - have a look at our Cambodia tours.