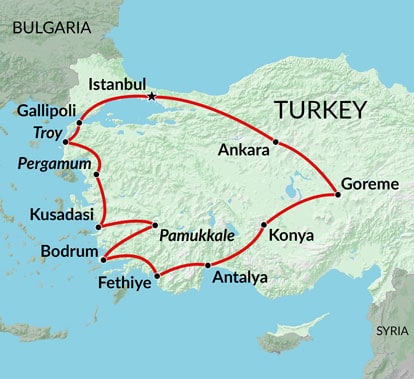 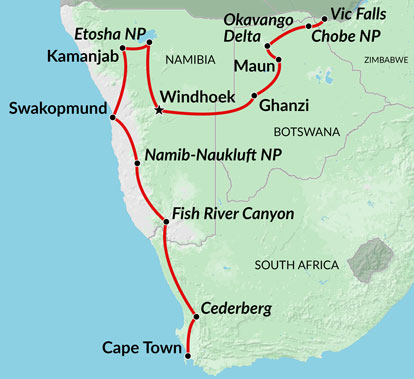 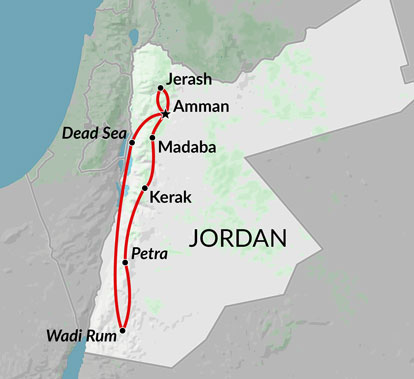 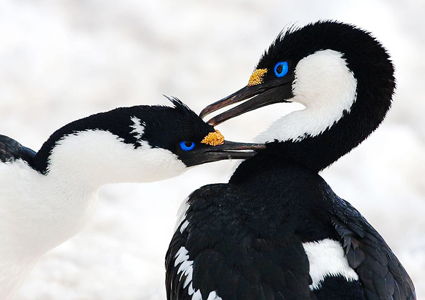 The Antarctic continent is surrounded by a boundless and inhospitable ocean, which in itself takes several days to cross by ship. However the seemingly empty sea that surrounds this snowbound land is home to a wealth of marine flora and fauna. Blooms of phytoplankton provide food for various zooplanktons, including vast swarms of krill, which are the staple diet of many larger marine animals, including whales, fish, seals and birds. The large population of marine animals makes the Antarctic a wildlife enthusiast’s paradise and offers a chance in a lifetime encounter with some of the most impressive and fascinating animals in their natural environment. Below is a brief introduction to the major wildlife you are likely to encounter on an expedition cruise to the Antarctic.

One of the most rewarding experiences of an Antarctic trip is the chance to spend time getting close up to the leviathans of the sea – the whale. Although ruthlessly exploited in the past, it is still possible to see these majestic creatures cruising the southern oceans in search of food. Whales can be divided into two groups, toothed whales (sperm and orca) and baleen whales (blue, humpback and fin), which strain crustacean such as krill from the sea.

Sperm
Made famous by Herman Melville’s novel Moby-Dick, the sperm whale is the largest living toothed animal. Its enormous head and narrow tooth-filled jaw make it unmistakable and easy to identify. Males can grow to 20m and weigh as much as 57 tonnes. Female sperm whales live in groups of 20 to 25 and are joined by males during the October to December breeding season. Sperm whales feed on mid to deep water squid, which can often grow up to 200kg in weight.

Orca
Also known as killer whales, the orca is the largest member of the dolphin family. Males can reach 9m in length and weigh more than 6 tonnes. Their distinctive black and white markings and large dorsal fin make them easy to identify. They feed on marine mammals, fish and birds and travel in pods of up to 50 individuals.

Blue
The blue whale is the largest whale and also the largest mammal on the planet. It is from the baleen family of whales, which means it feeds by filtering small crustaceans (krill) from the sea using fibrous plates (baleen) that line its jawbones. The largest recorded blue whale was 33.5m and probably over 200 tonnes in weight. A single blue whale can eat as much as 4.5 tonnes of krill in a day. They tend to be either solitary animals of travel in pairs.

Humpback
Humpback whales are usually black and can be recognised by their enormous flippers, which can grow to a third their total length. Reaching a length of 20m, they can weigh as much as 40 tonnes. Members of the baleen family like the blue whale, humpback whales filter feed on krill. Once grossly exploited by whale hunters, they are now fully protected and southern ocean population estimates are at around 17,000.

Minke whales are by far the most populous of southern ocean whales and population estimates are as many as 500,000. Relatively small at around 10m and 9 tonnes, they are black/grey in colour and fast swimmers. Like blue and humpback whales, the minke whale is a baleen and feeds on krill.

Other whales
Other species of whale found in and around the Antarctic include the Fin, Sei and Southern Right whales, all of which are baleen whales.

There are six species of seal common to the Antarctic region. They have no natural predator and therefore show no fear of man; however you should not get too close to seals as they can bite and tend to be very territorial, especially when protecting their harems. All seals are excellent swimmers and can hold their breaths for up to 30 minutes at a time.

Antarctic fur
The fur seal is a very common seal in the islands around the Antarctic and males can weigh more than 200kg. Males are a silver grey, whilst females are grey to brownish in colour. Fur seals breed in harems and are well known for being aggressive to intruders. They feed primarily on fish, squid and krill but lager males sometimes hunt penguins.

Leopard
These fearsome marine killers are the largest species of true Antarctic seal and can grow up to 3.5m and weigh more than 500kg. Their spotted fur and large sharp toothed mouths give rise to their name and they prey mainly on penguins, other seals, fish and krill. Little is known about their breeding habits and pups are born on the ice during the Antarctic summer. Solitary creatures, they spend most of their time patrolling the pack ice in search of prey.

Crabeater
The crabeater seal is the world’s most abundant seal with populations estimated at between 12 to 15 million. Contrary to their name, they eat mostly krill and are slim, reaching lengths of about 2.5m. They are usually solitary animals, however during breeding season in early spring they do form small family groups. The crabeater seal’s main predator is the killer whale and sometimes the leopard seal will take young seals.

Other seals that can be seen in the Antarctic include the massive Elephant seal; which can grow to 5m in length and weigh more than 3.5 tonnes, the elusive Ross seal and the portly Weddell seal.

Penguins
The penguin is perhaps Antarctica’s best know inhabitant and there are seven main species of penguin that make Antarctica their home. All penguins breed in colonies on land and all but the King and Emperor build nests. They all dive the icy oceans in search of prey such as silver fish, squid and krill. They range in size from the majestic Emperor penguin right down to the diminutive Rockhopper penguin.

Adélie penguins, named after the wife of French explorer Dumont d’Urville, are acommon type of penguin found through Antarctica with an estimated 2.5 million breeding pairs. They are black and white in colour with distinctive white eye rings and stand around 70cm (27.5”) tall and weigh about 5kg (11lbs). Their breeding season is from November to February and they can come together in very large colonies. Chicks are a uniform brown in colour.

Chinstrap penguins are similar in size and colour to the Adélie penguin, however they have a distinctive black line below the chin, which gives rise to their name. The second most common Antarctic penguin, there are an estimated 5 million breeding pairs. Their breeding season is December to March and each breeding pair usually produces two eggs.

Emperor penguins are the world’s largest penguin standing up to 1.15m (3’8″) tall and weighing as much as 40kg (88lbs). They can be sometimes be confused with their close relative the King penguin, which is slightly smaller and has more brightly coloured orange markings. Breeding takes place during the Antarctic winter between April and December. A single egg is incubated on the feet of the male penguins who huddle together to reduce heat loss in the bitter cold of the Antarctic winter. There are estimated to be around 200,000 breeding pairs of Emperor penguin.

King penguins are the world’s second largest penguin standing around 95cm (3’1″) and weighing 15kg (33lbs). Like the Emperor penguin, which the closely resemble in appearance, they produce just one egg, which is incubated on the feet of both parents. Their breeding season starts in November or January and incubation takes place during the harsh Antarctic winter. They produce two chicks every three years, which are a downy, dark brown in colour. There are estimated to be about 1.5 million breeding pairs.

The Gentoo penguins orange bill and flash of white behind the eye makes it easy to distinguish from the slightly smaller Adélie and Chinstrap penguin. Its breeding season runs from December to March when it lays two eggs. There are an estimated 320,000 breeding pairs and its numbers are on the increase.

Macaroni penguins are the most common penguin in the Antarctic with an estimated 9 million breeding pairs. They are easily identified by their orange tassels, which meet in the middle above the eyes. Similar in size and weight to the Chinstrap penguin, their breeding season is between December and March and colonies can be immense in size. They lay two eggs but the first is usually abandoned after the second is laid and only one egg hatches.

The Rockhopper penguin is the smallest penguin and can be distinguished from the Macaroni penguin by its more yellow tassels, which do not meet above the eyes. They are about 55cm (21.6″) tall and weigh around 2.5kg (5.5lbs). Their breeding season is between December and March and they lay eggs in nests between boulders and on exposed shores. Diseases and introduced rats have greatly reduced populations of Rockhopper penguins and estimated populations are around 1.8 million breeding pairs.

Albatrosses
These majestic birds are a common sight from on board your Antarctic cruise ship and their graceful flight makes for excellent photographic opportunities. There are several species of Albatross found in the Antarctic and all feed of fish, squid and crustaceans found on the surface of the ocean. With a wingspan of 3.5m the Wandering albatross is the largest and is often difficult to distinguish from its smaller relatives the Royal and Amsterdam albatrosses. Other varieties of albatross include the pale black to brown Sooty albatross, the Shy albatross, and the Grey-headed albatross. Although sadly in decline as a result of commercial fishing, pollution, introduced predators and land disturbances, recent conservation efforts are underway to help ensure the future of these majestic birds.

Other birds
There are numerous species of petrel in the Antarctic and the vast majority dig burrows in which to breed. Common varieties include Antarctic fulmars, Blue petrels, Snow petrels, Great shearwaters, Diving petrels, and prions.

Cormorants, Kelp gulls, skuas and terns are also commonly spotted feeding in the cold waters of the Antarctic.

There are more than 270 species of fish found in the waters around Antarctica. Some species have evolved a glycoprotein antifreeze in their body fluids to prevent freezing, such as the Antarctic cod (not related to true cod) or Notothenioids. The mackerel icefish is an important prey for Antarctic fur seals, and its commercial fishery is closely regulated. Toothfish, sometimes know as Antarctic sea bass, in another important commercial fishery, much of which is done by long line fishing. This form fishing is responsible for death of thousands of seabirds which accidentally get caught on the hooks.

Marine plants are dominated by algae and species of seaweed such as the bull kelp, which grows in thick forests in areas sheltered from the rough seas. Land plants on the continent are restricted to mostly mosses, lichens and algae, along with two flowering plants – hairgrass and pearlwort. On the Sub-antarctic Island more lush vegetation is present due to the rainfall, summer sunshine and intense fertilisation from thousands of burrowing petrels.