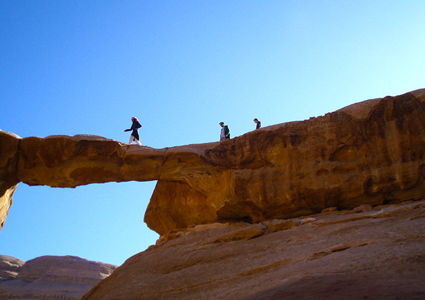 If ever there was an ‘am I still on planet Earth?’ sort of a desert, it’s Wadi Rum. Mention Jordan to 20-to-30-something adventurers, and many will tell you that the country begins and ends right here. Trekkers enjoy its challenging climbs and easier scrambles, and its routes through red hills, ridges and canyons. All of Wadi Rum’s sandstone and granite valley-bottoms are 900 to 1,000 metres above sea-level, and its Moon-like landscape also doubled for Mars in the movie, Red Planet. Famously, much of David Lean’s epic, Lawrence of Arabia, was filmed here.

‘Wadi’ is Arabic for ‘valley’, and this is the largest valley in the Kingdom of Jordan. ‘Rum’ means ‘high’ and ‘elevated’. It’s a high valley that is forever linked to the British officer who supported Arab rebels against the Ottoman Turks (1916-18), Captain T.E. Lawrence ‘of Arabia.’ He based his Army HQ here, and named an amazing rock-formation ‘The Seven Pillars of Wisdom’. But, looking wiser and tall enough for serious climbers, Jabal (Mount) Rum is the highest in the region at 1,734 metres above sea-level.

Hire a camel and follow in the hoof-steps of Lawrence, and get the flavour of the Arabian Desert he lived for. You can explore hidden caves and canyons, and discover 3,000-year-old rock inscriptions of humans and antelopes. Trek up sandstone, or ride over rolling dunes in a 4×4. You’ll appreciate that for all its sand, this is a very diverse wilderness of rare plants and animals. The grey wolf, Blandford’s fox, the sand cat and the ibex all roam the region. Wadi Rum is also ideal for bird-watching – there are 110 recorded species.

If you’d like a bird’s-eye view, hot air balloons are roped for lift-off. You’ll wonder how you ever lived without deserts as you ride an Arab horse over hot sand, or hike into heat-haze with life-saving water bottles. Apart from learning to be wise about water and sun-protection, travellers have gained a lot from the Zalabia Bedouin. At Sunset Camp, 12 km from the village of Rum at the crossroads of White, Red and Black Deserts (but they’re mostly red), there’s a circular communal tent. It’s the perfect place to talk to friendly tribesmen about their passion for eco-adventure.

Over sweet mint tea or cardamom-flavoured coffee, Humeitat and Mzanah Bedouin tribesmen love to talk about their local traditions. While many of them have moved into concrete block-houses, some still live in goat-skin tents. Raising goats, sheep and camels in the desert, these men wear traditional dress and observe centuries-old customs – including their womenfolk being barred from social activities. Later, around the campfire, you and fellow travellers can share a meal under the stars. And then there’s the music – perhaps a Rum rebaba solo by a Bedouin musician.

Check out our tours to Jordan or email tours@encounterstravel.com.