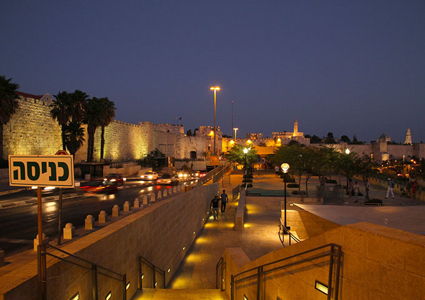 Known in the 4,000 year-old city of Jerusalem as ‘Haram Esh-Sharif’ and ‘Western Wall’, your guide will explain all this stonework – the remains of the original Fort Antonia. The early Roman fortress was named after General Marcus Antonius of Antony-and-Cleopatra fame. Forty years after King Herod Antipater crucified Jesus, Fort Antonia was used to house the Roman 10th Legion. In 273 AD the soldiers were ordered out of Jerusalem.

At the Western Wall, remember that it is Jerusalem’s oldest preserved building fragment since Jesus of Nazareth lived here. For ages, people have argued about the origins and history of these holy places. That’s why the Western Wall (Hakotel Hama’aravi) is believed by some to be what is left of the outer walls of King Herod the Great’s long-ago destroyed Temple Mount. It was the Christians of the 1660s who christened it the ‘Wailing Wall’.

The Church of the Holy Sepulchre is within the city walls of Old Jerusalem. Fire has licked and regularly destroyed the Church of the Holy Sepulchre over the ages. In 1808 the dome of the rotunda imploded spectacularly, its disappearance caused the equally spectacular Ottoman Baroque restoration work of 1810. Improvements never stop at the Church, but its appearance hasn’t really changed since 1854. Today’s 1870s dome was restored between 1994 and 1997 – renovations that have hammered and sawn away since 1959.

No crusading Knight’s 12th-century ‘armed pilgrimage’ was considered complete until he had knelt down to pray at the Holy Sepulchre. This was because in 1149, all traces of Jesus Christ’s execution, entombment and resurrection were placed together under one roof. Following structural improvements in 1555, management of the Church of the Holy Sepulchre alternated between Franciscans and Orthodox. After many discussions and arguments, they were given permanently shared control in 1853.

This land of Golgotha – of the Hill of Calvary – where Jesus was crucified, entombed in a sepulchre and then rose again, was worshipped as holy. But in 135 AD, seething with anti-Christian rage, Roman Emperor Hadrian blotted this landscape with a temple to Venus and her Greek equivalent, Aphrodite. He also dumped his province’s ‘Judaea’ name, re-branding it as ‘Syria Palaestina’. Then, around 325 AD, 1st Emperor Constantine fully supported his mother’s ambition to destroy Hadrian’s tasteless temple. And over its foundations a basilica was built to honour the life, death, and resurrection of Christ.

Visit Jerusalem on the Fantastic Israel tour with Encounters Travel