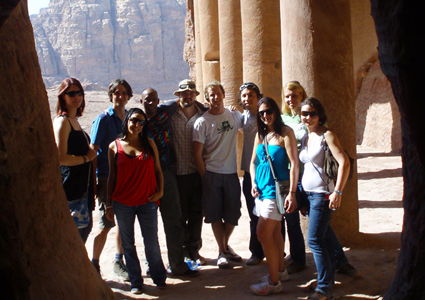 Moses raised his staff high towards the hot dry cliff-face, smashed it hard against the rock. Water glinted, dribbled, seeped, spurted and streamed down – a real shower. According to Arab tradition, this refreshing Biblical scene happened here in around 1350 BC. The Arab name for the narrow valley at that leads to Petra is The Wadi Musa – ‘Wadi of Moses’.

Built in the 6th century BC as a capitol for the Nabataeans, Petra is your reward for a horse or camel-ride through the Siq, a narrow corridor of cliffs. Circle around more rose red rocks and you’ll arrive at the amphitheatre, the museum and – 800 steps up a mountain – the unmissable monastery. This is Petra’s largest monument, and dates from the 1st century BC. It is dedicated to Obodas I and, according to inscriptions, it is believed to be the meeting place of the god Obodas.

Petra means rock, and it is a city of immense historical importance in this, the Jordanian governorate of Ma’an. Sandstone and granite rock-cut architecture and water conduits are the Wow!-factors here. Established as the capital city of the Nabataeans, Petra is a wonderful symbol of Jordan and also its number 1 tourist draw. Lying on the slope of Mount Hor, Petra is a basin among mountains that are the eastern flank of Wadi Arabah – the mighty valley that runs from the Dead Sea to the Gulf of Aqaba.

Petra was unheard of in the West until 1812, when it was ‘discovered’ by Swiss explorer Johann Ludwig Burckhardt. In recent decades Indiana Jones and the Last Crusade has included images of Petra’s Al Khazneh Treasury. It is actually just a massive a frontage, an incredible 40m-high tomb hacked out of mountain in the 1st century BC, probably by Near-Eastern Hellenistic architects. It was appropriately listed as one of the New Seven Wonders of the World in 2007, and was chosen as one of ‘the 40 places you have to see before you die’ by the BBC.

Check out our Jordan tours.