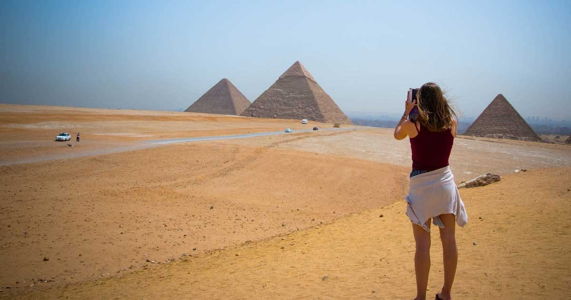 Thinking about planning a holiday to Egypt? One of the very first questions you might have is knowing when is the best time to visit which some would say, is ‘the best outdoor museum in the world’.

Don’t waste your hard earned cash by going at the wrong time of year. Here, you’ll not only find out when is the best time to visit Egypt, but also important factors such as:

When is the best time to visit Egypt?

You’re more than likely want to visit Egypt when the weather is most pleasant. The months of October to April are the best times to visit Egypt. Temperatures are favourable during these months.

It’s important to note that you can expect crowds during this year. October to April is generally smack bang in the middle of Egypt’s peak tourism season.

When is the best time to visit Egypt to escape the crowds?

Not keen on the masses? Try travelling during the sweltering hot months of June to September. If your travel budget isn’t that big, you’ll be glad to know that sightseeing and accommodation are generally cheaper during this period as well.

Weather to expect in Egypt

Short answer: The days are warm but the nights are cool.

Weather is generally the deciding factor for many travellers planning an Egypt tour. Egypt is usually hot and sunny throughout the year, with very little rain whatsoever.

Egypt only has two seasons:

The only differences between winter and summer in Egypt are the changes in daytime temperatures and wind. During the winter season, temperatures range between 20°C (68°F) during the day and around 10°C (50°F) at night. The summer months sees temperatures rising around 35°C (95°F).

Things to see and do in Egypt

Fixed in a solid rock cliff on the west bank of the Nile River is where you’ll find Abu Simbel, one of Egypt’s most popular ancient sites.

Abu Simbel is the site of two temples built by the Egyptian king Ramses II. It’s Egypt’s second most visited tourist site, with the Pyramids of Giza leading the way in that regard.

There are four massive statues of Ramses in front of the main temple are prime examples of ancient Egyptian art.

Adding to Abu Simbel’s architectural brilliance is the fact that it was relocated in 1968, on an artificial hill made from a domed structure, high above the Aswan High Dam reservoir. Its relocation was necessary to prevent it being submerged during the creation of Lake Nasser, the massive artificial water reservoir formed after the building of the Aswan High Dam on the Nile River.

See the pyramids and the Great Sphinx of Giza

These are the iconic Egypt attractions that bring in so many tourists from all over the globe.

Built between 2589 and 2504 B.C., the towering pyramids of Khufu, Khafre and Menkaure are marvels of ancient architecture. Just how they were built remains a question on everyone’s lips across the world, but it adds a mystery that simply cannot be missed.

Each pyramid was built with more than two million blocks of stone, weighing just as much as a baby elephant.

The Great Sphinx of Giza is another towering ancient monument that is a masterpiece of Egypt’s rich architectural art history.

Located at the at the Giza Plateau, adjacent to the Great Pyramids of Giza, it’s considered to be one of the largest single-stone statues on the planet. It was carved from the bedrock of the Giza plateau, a single ridge of limestone that is 73 metres long and 20 metres high.

Be mesmerised by Karnak Temple

Dating back to 2000 BC, Karnak is the modern-day name for the ancient site of the Temple of Amun at Thebes. Just like many of the monuments in Egypt, Karnak Temple is massive, stretching for over three kilometres and housing over 25 temples and chapels within its structures.

What sets Karnak Temple apart from other temples is the length of time that it has been created and used. It’s understood that over 30 pharaohs contributed to it, making it one of the most unique monuments in Egypt. It’s the hallmark of design and architecture. The Hypostyle Hall is breathtaking, filled with 134 huge pillars and still the largest room of any religious building in the world.

The Temple of Amun is the only section open to the public. It can be accessed via the Avenue of the Sphinxes, that once stretched for two kilometres from Karnak to the Luxor Temple.

Sail in a Felucca

Egypt’s capital of Cairo can get quite noisy, but the best cure for that would be a peaceful sail on the Nile River in a Felucca – a traditional wooden sailing boat. Only powered by the wind, with its rig housing one lateen sail.

Feluccas can measure up to 12-13 metres in size.They are perfect for travellers looking to catch a breeze on a hot summer night.

Since it’s so dependant on the wind – it’s hard to nail down an exact itinerary for a Felucca cruise down the Nile. Sailing happens during the day – with stops at points of interest. Just before sunset, the anchor will be dropped and you’ll spend the night underneath the stars.  Food, drinks and other refreshments can be bought onboard.

Want to experience Egypt? Have a look at these amazing deals.

This comprehensive Egypt tour covers Cairo and the Nile Valley as well as the Red Sea at Hurghada. We start with visits to the iconic Pyramids and Sphinx at Gisa where our local Egyptologist guides will start their explanations about ancient Pharaonic history and the evolution of pyramid building. While in Cairo we’ll also visit the huge Egyptian Museum, home to a host of ancient artefacts, mummies, and the famous King Tutankhamun display.

This classic 8-day tour introduces you to the main sites of Egypt while spoiling you with a higher standard of hotels, transport and cruise boat than our other Egypt tours. The tour starts with time spent in Cairo based in a 5-star hotel while you tour the Pyramids, Sphinx and the Step Pyramid at Saqqara.

You then take a short internal flight to Luxor to enjoy a 4-night cruise through the Nile Valley on a 5-star cruise ship from Luxor to Aswan. En-route you’ll visit the temples at Edfu and Komombo while watching typical rural Egyptian life pass you by from the sun deck of the boat.

From Aswan you will visit the beautiful island temple of Philae and enjoy a felucca sailboat trip on the Nile before we fly you back to Cairo. We end in Cairo with a trip to the famous Egyptian Museum which holds the treasures of Tutankhamun’s tomb. This tour offers our most comfortable and luxurious experience exploring the treasures of Egypt.

Every February sees the celebration Ramses II precision and architectural brilliance, which carefully angled his temple at Abu Simbel so that the inner chamber lights up for his rise to the throne which took place at the end of February.

This day is often regarded as the first day of spring. It’s also the first Monday after the Coptic Easter. It’s celebrated by many by having picnics and enjoying other outdoor activities.

In celebration of Egypt’s national animal, the South Sinai Camel Festival gives people the chance to watch and participate in camel racing.

This Art Festival is said to be the most impressive art festival in the Arab world. Lasting for a week in Ismailia, it is a celebration of the colourful folk-art from Asia, Africa and Europe.

The massive Abu Simbel Temple lights up once more in October to celebrate Ramses II birthday.