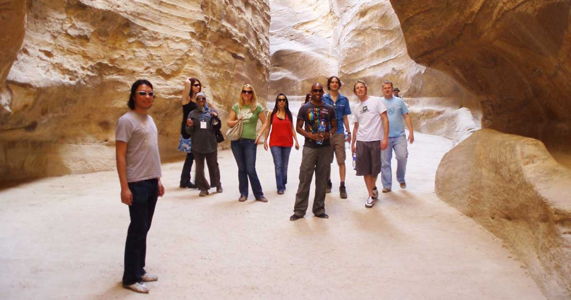 Undoubtedly one of the jewels in the Middle Eastern crown, Jordan is steeped in history, from the 2000 year-old, rose-colored sandstone city of Petra, the sandy deserts of Wadi Rum to the old pilgrimage routes mentioned in the old testament of the Bible.

If you’re planning a Jordan tour or holiday, in this article we’ll tell you when is the best time to visit Jordan, as well as:

When is the best time to visit Jordan?

Short answer: Between the months of March and May

Jordan is best visited during the spring months of March and May. Winter has just ended, so expect the nights to be chilly in March, but as you head into April and May, temperatures begin to warm, without it being uncomfortably hot.

The winter rains ensures that the valleys are lush green and the wildflowers begin to bloom, creating a kaleidoscope of colours like no other.

Weather to expect in Jordan

Things to see and do in Jordan

Explore the lost city of Petra

Located in Jordan’s southwestern desert, Petra dates back to around 300 B.C. and was once the capital of the Nabatean Kingdom. To get to Petra, you’ll have to travel through a canyon known as Al Siq before reaching the archaeological site, filled with tombs and temples etched into the towering sandstone cliffs.

A must-see during a visit to Petra is the Al Khazneh Temple, a massive 45 metre structure, also known as the treasury.

Experience the salty waters of the Dead Sea

Bordering Israel, the West Bank and Jordan, the Dead Sea is a salt lake, with its banks rising 400 metres above sea level.

It’s standout feature is it’s highly saline waters, in fact, swimmers can easily float above the surface. The salty waters also produces mineral rich mud, which is widely used in therapeutic and cosmetic therapy by spas and resorts in the area.

Situated in Jordan’s south, Wadi Rum is a protected desert which houses majestic sandstone mountains such as Jebel Um Ishrin and natural arches such as Burdah Rock Bridge.

Another attraction to look out for is the inscriptions and carvings etched into the caverns and chasms of the Wadi Rum desert, particularly visible in Khazali Canyon. It’s also home to a natural waterhole called Lawrence’s Spring, named after British soldier Lawrence of Arabia, who allegedly washed there.

This is the perfect Jordan adventure tour, visiting Roman ruins at Jerash, the Dead Sea and scenic King’s Highway, and of course including Petra and Wadi Rum.

This great value tour of Jordan covers all the major sites including Amman, Jerash, Petra, Wadi Rum and the Dead Sea, and is the perfect introduction to amazing Jordan.

This great celebration is held on a different day in January (depending on the cycles of the moon) to mark the start of the Islamic New Year.

Situated in Jordan’s north, the town of Aqaba hosts a unique festival every February to celebrate the culture of the Bedouin. Visitors can expect to see lots of crafts on show, as well as the unique talents and traditions of the Bedouin.

The Amman International Theatre Festival brings together the local talent from all over Jordan – giving them the opportunity to showcase their unique skills to the world – either in English or Arabic.

Held annually in the historical city of Jerash, it’s regarded as the biggest cultural festival in Jordan. There’s something for everyone here, and visitors will be entralled by the music, dance, literature, food on show.