Four reasons why you should visit Luxor 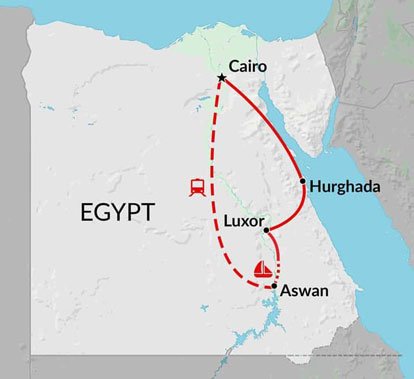 Cairo is usually the city that people want to visit on their first trip to Egypt. Although Luxor might be lacking in the pyramids and the Sphinx department, it boasts one third of the world's ancient monuments and intact temples dating back 4000 years.

Overlooking the Nile River speckled with sailboats, Luxor exudes an otherworldly air as you step back into the past. Here are four reasons why you should visit Luxor.

One of the many appealing reasons to visit Luxor is the weather as the temperature is always warm and there is hardly ever rain. Egypt only has two seasons; a mild winter between the months of November to April and a hot summer from May to October.

The perfect time of year to holiday in Luxor is from October to April when there is less humidity and you can venture to the historic landmarks in comfort.

As the city of Luxor is set on the east bank of the Nile, you can enjoy a ride on a felucca - a traditional wooden sailboat. This excursion is the best way to catch the breeze and watch the sunset.

With our Egypt tours, you can stay over night on a felucca and even get the chance to sleep on the deck of the boat (mosquito nets, blankets and mattresses are provided). A local Nubian crew will also be on hand to cook you delicious meals as you float. This mode of transport not only gives you a chance to relax, but also allows you to see another side of the country.

Even when it is hot, we recommend wearing long-sleeved tops and trousers while viewing the temples and sacred sites. Women travellers in general are encouraged to dress modestly as Egypt is a conservative country. When entering a mosque, you should remove your shoes.

In the evenings, the temperature can drop so remember to pack a light jacket.

To truly experience the magnificence of Luxor, you should take to the sky in a hot air balloon. By doing this, you have the best view of the 'biggest museum in the world'. Many of our Egypt tours offer this unique excursion - and you should not miss it.

As this city boasts an endless amount of noteworthy landmarks, trying to see them all can be both overwhelming and tiring, especially in the heat. This is when the hot air balloon is an ideal option to identify it all. The largest religious building ever constructed, Karnak Temple, is best observed from above.

When the tour stops over in Luxor, the optional activity of flying in a hot air balloon takes place early in the morning. As you ascend into the sky, you can see the sunrise over the city - a most spectacular sight.

The hot air balloon takes off from the west bank of the Nile and spends some time hovering over the Valley of the Kings and the vast collection of ruins and complexes below. Our Egypt tours only work with companies that have an excellent track record to ensure that you have a safe journey.

Remnants of the past

Built on and around the ancient city of Thebes, Luxor has the largest concentration of ancient ruins in the Nile Valley, if not the world. Just before arriving in Luxor, our Egypt tour passes two temples. Kom Ombo Temple is a distinctive and double temple dedicated to the crocodile god, Sobek. Here, you can spot mummified crocodiles that have been put on display. The second temple is called Edfu - an ancient shrine on the west bank of the Nile and one of the best-preserved temples in Egypt.

To the west of the Luxor lies the City of the Dead also known as the Cairo Necropolis. This Islamic necropolis and cemetery is located below the Mokattam Hills. The landscape is covered with mortuary temples and tomb structures.

Our Egypt tour will also pay a visit to the vast temple complex at Karnak, which was the former religious centre of Thebes and Upper Egypt. This complex was connected to Luxor by a lengthy avenue lined with sphinxes and then to the Nile via a canal. As the Egypt tour comes through the smaller sphinx-lined avenue built by Ramses II, you will see a grand pylon entrance. The main courtyard features three chapels and the Hypostyle Hall has 134 columns, carved with hieroglyphic inscriptions.

After you have explored the ancient sites during the day, our Egypt tour will walk to the Luxor Temple in the evening. This expansive sanctuary is open till late and is best seen illuminated at night. Unlike the other temples, it is not dedicated to a god or king; instead it is devoted to the rejuvenation of kingship.

The following day, the Egypt tour makes its way to the west bank. This is the site of the Valley of the Kings, also known as the Valley of the Gates of the Kings. This valley contains 63 tombs and chambers and was the main burial place for the royal figures of the Egyptian New Kingdom. As part of the Egypt tour, you will get to enter some of these Pharaonic tombs and look around the chambers. Your guide will walk you through the tombs, showing you points of interest.

It was in one of these near-intact tombs that Tutankhamen was discovered in 1922. The golden burial mask of this Egyptian pharaoh of the 18th dynasty along with treasures from his tomb is now displayed in the Egyptian Museum in Cairo. Most of our Egypt tours will take you to the Egyptian Museum during your time in Cairo where you can see the Tutankhamen exhibit up close.

When you visit the valley, the tour will also include sightings of the Mortuary Temple of Hatshepsut - an ancient funerary shrine. Built for the Pharaoh Hatshepsut, the temple is one of the greatest Egyptian architectural achievements and reassembles classic Greek architecture. Medinet Temple is next on the itinerary and is another mortuary temple of Ramses III. The last landmark of the day is the Colossi of Memnon - two massive stone statues of the Pharaoh Amenhotep III. Due to earthquakes and floods, little of the structure remains today apart from the two striking statues.

Luxor has enough activities to appease young and old. You can also tick off all of the sights with ease and no physical strength is required. One of our Egypt tours, the Egyptian Family Adventure tour even caters specifically for families. It covers the famous attractions in Egypt and includes some more active excursions. The groups are kept small and are led by a family-friendly guide.

This exact tour spends some time in Luxor and we recommend taking the family to meander through the bazaars selling colourful trinkets and traditional food. You can also go on a short felucca trip on the Nile to the nearby Banana Island or ride a camel by the banks of the Nile.

The Mummification Museum in the town is also worth checking out. Located in the former visitors centre, this edifice features exhibits and displays showcasing the art of mummification. Look out for the mummified animals as well as the mummy of a 21st dynasty priest of Amun. If you are after another interesting and air-conditioned escape, walk around the Luxor Museum. This is one of the best museums in Egypt where you can gaze at a gathering of antiquities from different periods.

To truly embrace all that Luxor has to offer, treat your family to our Egypt tour's optional excursion - a hot air balloon ride. When you circle the city with the sun rising in the background, you can capture some unforgettable family photographs.