Why you should visit South Africa in January 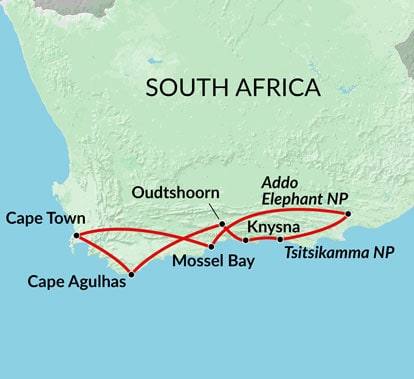 Explore South Africa's Garden Route in this 10-day tour, which stretches from Cape Town to Port Elizabeth, whilst you explore its beautiful countryside, rugged coastlines, the Big Five species and much more. 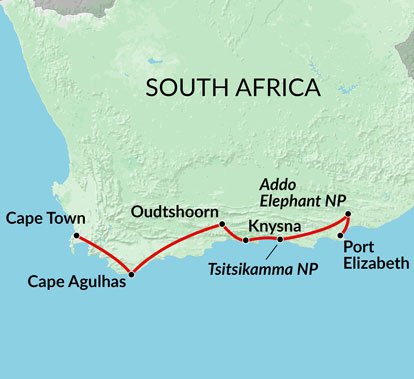 Traversing the South African coast from Cape Town to Port Elizabeth, this 8-day tour takes you along the famous 'Garden Route' mixing amazing wildlife, wine tastings and beautiful scenery along the way.

Sometimes the best way to start the New Year is with a new adventure - and why not let that adventure be in none other than South Africa, the Rainbow Nation.

South Africa in January is often believed to be the peak season of the summer. The activities and the places to visit aren't short on thrill and excitement, so there's absolutely no reason why you shouldn't plan your trip at the start of the year in this dazzling country.

But, just in case you needed some convincing, here is our guide to when, where, why, and what you can do in South Africa this January - or the next.

If you are thinking of immersing yourself into the diversity of South Africa, have a look at our South African tours - and get ready to make the best memories.

The very first thing that most of the people fret about when it comes to visiting is South Africa's January weather - the weather can be quite hot and humid owing to the persistent flow of warm currents through the Indian Ocean.

The best thing about visiting South Africa in the month of January is the fact that the climate is quite pleasant. The temperature tends to border around 19 to 29 degrees. The nights are comparatively colder than the daytime. So, if you get cold easily, pack a few warm clothes.

South Africa is gradually gaining more recognition for its adventurous activities - from Namibia to the capital city of Cape Town, the places to visit are endless.

Commonly known as Jo'burg or Jozi, this rapidly changing city is the vibrant heart of South Africa.

Its centre is smartening up and new loft apartments and office developments are being constructed at a rapid pace. The hipster-friendly neighbourhood of Maboneng is considered one of the most successful urban-renewal projects in the world.

Addo Elephant National Park is the third-largest national park in Southern Africa and home to not only elephants but to Africa's Big Seven: lion, elephant, rhino, buffalo, leopard, southern right whale and the great white shark.

When Addo was proclaimed a national park in 1931, there were only 11 elephants left; today there are more than 600 in the park, and you'd be unlucky not to see some.

Durban on the east coast of South Africa has often been overshadowed by its popular sisters, Johannesburg and Cape Town, but this laid-back seaside town is slowly making waves.

The sunny weather, warm Indian Ocean, and warm Mozambique Current keeps Durban warmer than the rest of the country. Dubbed South Africa's playground, the day always promises to be warm whatever the season.

There are many reasons to visit the Kgalagadi such as the red dunes, star-filled skies and fabulous sightings of big game like leopards, cheetahs and gemsbok, but visiting to see the enormous Kalahari lions and experience the vast landscape is at the top of the list.

Predators are the Kgalagadi's biggest attraction.

This is unspoilt beauty and the perfect destination for any nature lover.

Experience the 114 curves and 9km drive of one of the world's most scenic and majestic drives - Chapman's Peak, Cape Town. Hop off at one of the many picnic spots where you can enjoy and take photographs of the breathtaking views of the rugged cliffs, the beaches, the ocean, whales and dolphins, and more.

Now that we have walked ourselves through the list of places to visit, it is time to go through the things to do.

A coming-together of cultures, cuisines and landscapes, there's nowhere quite like Cape Town, a singularly beautiful city crowned by the magnificent Table Mountain National Park.

To truly enjoy South African food, you have to actually be in South Africa. It's all about shared history, your surroundings, and the people with whom you've gathered to break (braai) bread.

South African cuisine includes both cookery practised by indigenous people of Africa such as the Sotho- and Nguni-speaking people.

The colonial influences include that of white European people of mostly Dutch, German, French and British descent and their Indo-Asian slaves or servants. The latter includes the cuisine of the "Cape Malay" people, which has many characteristics of Indonesia.

Both Hluhluwe and Imfolozi Game Reserve were separate parks now combined and is one of the oldest in Africa. Apart from the Big Five, HIP has some special animals such as the endangered Wild Dog, Cheetah and red Duiker, which you are unlikely to see in many other reserves in the province.

When you go on safari in Africa, you'll experience a new world of wildlife adventure, fantastic scenery and cultural highlights - it is something completely different to a regular holiday and not only will you have the time of your life while you're there, but you'll build up countless memories and knowledge.

Situated along the slopes of Cape Town's towering Table Mountain, Kirstenbosch Gardens is one of the most pristine botanical gardens on the planet.

According to South African Tourism, Kirstenbosch Gardens is home to approximately 7,000 plants species. It's also part of the Cape Floral Kingdom and a UNESCO World Heritage Site.

Packing for South Africa is not extensive - the days are warm and the nights a bit cooler if not cold, so ensure to pack a few warm clothes just in case.

Apart from this, you can keep your essential toiletries, medicines, a hat, a pair of sunglasses, and an easy to carry backpack so that you carry little things around easily.