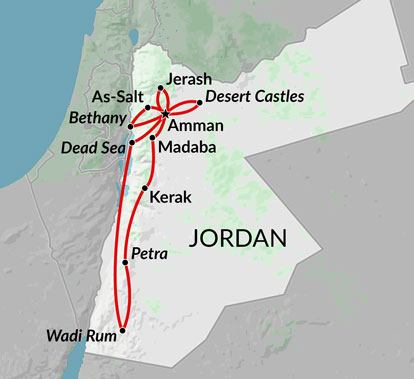 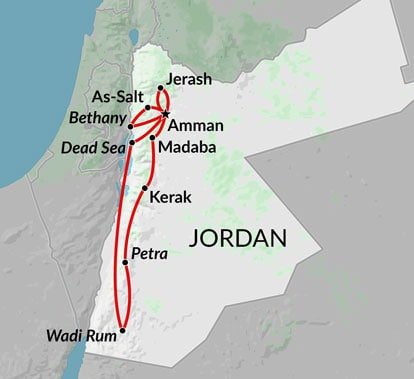 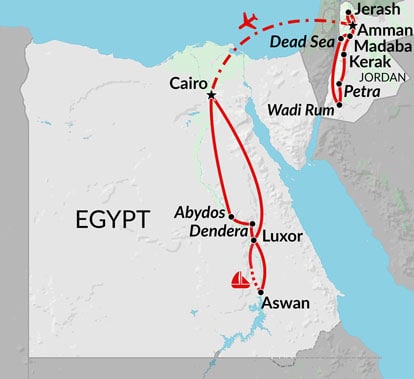 This comprehensive Jordan & Egypt tour covers Petra & Jerash in Jordan, and the Pyramids, Sphinx and Karnak temple in Luxor.

Jordan is a country located in Western Asia, in the region known as the Middle East. It is an Arab country that is found at the intersection of Asia, Europe, and Africa. It is land of vast deserts, fascinating historical landmarks, lively cities, and friendly people. In Jordan you will find the legacies of past civilisations alongside all the components of modern living. Boundless landscapes and stunning natural phenomena complete the ultimate travel destination.

We have picked 5 essential attractions to visit on a Jordan tour.

The ancient city of Petra is possibly Jordan's most incredible attraction. It is certainly its most iconic and well-known landmark. Found among the desert mountains and canyons of southwestern Jordan, this fascinating site is a historical and archaeological wonder, and a UNESCO World Heritage site. It is a symbol of Jordan and is the country's most-visited tourist site. The ancient city, which dates back to 300 B.C., was the capital of the Nabatean Kingdom.

It is also known as the Rose City, due to the colour of the stone that was used to construct it.

A deep gorge of 1.2km, called the Siq, forms the eastern access point to Petra. It leads directly to the most iconic part of the site, the façade of the ancient treasury, known as Al-Khazneh. The face of the Khazneh, elaborately carved out of the sandstone rock, towers above the ravine. This impressive structure was voted as one of the New 7 Wonders of the World in 2007. It fronts a royal chamber that is believed to have been the mausoleum of the Nabatean King Aretas IV.

Besides the famous Khazneh, the remainder of the city is filled with other tombs and carvings, as well as the remains of the impressive water channel system that was used here.

Only a small percentage of the city has been uncovered by archaeologists. Much of its treasures still remain buried underground.

The Greco-Roman archaeological site at Jerash, located in northern Jordan, is one of the best-preserved ancient cities in the world. Originally founded as a Greek city in the 4th century B.C., Jerash only began to thrive under Roman rule about 300 years later. It existed alongside Petra, and, like the other ancient city, was a centre of trade for goods being imported and exported. During this prosperous time, the city expanded and became one of the grandest Roman cities in the world.

The remains of Jerash were buried and remained hidden for hundreds of years. They were rediscovered in 1806.

While they may be called the "ruins" of Jerash, many of the structures are still in excellent condition. When you visit, you will be able to see the grand plaza surrounded by its colonnades, and the hippodrome which was used for chariot races. You will get to walk along the streets as the ancient Romans once did, and see temples and theatres, columns and carvings. You may even get the chance to witness a full-speed horse-drawn chariot race and see Roman "gladiators" in full regalia, when the Jerash Heritage Company puts on a show called the "Roman Army and Chariot Experience".

Wadi Rum, also known as Wadi al Qamar (Valley of the Moon), is located in southern Jordan, and is a stunning natural and cultural heritage site. It is a mountainous desert region, featuring red and pink sands, natural arches, dunes, cliffs, gorges, caverns, and rock formations. The breathtaking desert landscape is vast and remote, exuding an otherworldly aura that evokes something primal. It was used as a backdrop to the sci-fi movie The Martian, and also featured in Rogue One: A Star Wars Story, as well as several other films. There are also many ancient rock engravings to be seen in Wadi Rum, intriguing reminders of the civilizations that inhabited the valley since prehistoric times.

Wadi Rum can be explored via a jeep safari, and on our tours, you will get a chance to enjoy a sunset camel ride here. You will also get to have the unique and thrilling experience of spending a night in a Bedouin camp out in the desert. A traditional Bedouin meal is served, and you can then choose to sleep in a comfortable tent (with proper bedding), or have the magical experience of sleeping out under the stars.

Amman is the capital city of Jordan, and is the economic, cultural, and administrative hub of the country.

It is the largest city in the Levant, and is rich in historical and cultural significance.

You will find Roman ruins, mosques and souks, and a spectacular museum, all alongside contemporary city districts that feature bars, cafes, hotels, malls, and leafy urban residential areas.

An interesting quirk of Amman is its monochromatic centre, which is best seen from the top of the hill on which the Citadel is perched. In the past, there was a law which required all the houses and buildings of the city to be painted with the same pale hue, resulting in a sight that is very pleasing to look at.

There is no region in Jordan that has more historical landmarks than Madaba. It is a market town located near to the Dead Sea. The valleys and coastal landscape surrounding it provide wonderfully scenic views. The town is most well-known for its beautiful collection of mosaics from the Byzantine era, the most famous and striking of which is found on the floor of the Saint George's Church. It is an extraordinary map of the region, called the Madaba Map, and known as the oldest map of Palestine to exist. Dating back to 560 A.D., it shows the region's main biblical sites. It originally comprised of more than 2 million pieces, and was 6m wide and around 15m to 25m long. Although the entire map has not survived until today, enough remains to make it a truly captivating sight.

Another interesting characteristic of Madaba is the fact that it is home to the largest Christian population in Jordan, which is a predominantly Muslim country. It prides itself on religious tolerance and coexistence. This is poignantly exemplified on a Friday morning in the town, when the morning adhaan-- the Muslim call to prayer-- can be heard at the same time as the pealing of church bells that ring to awaken Orthodox Christians.