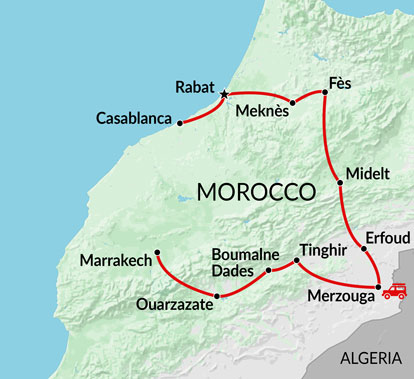 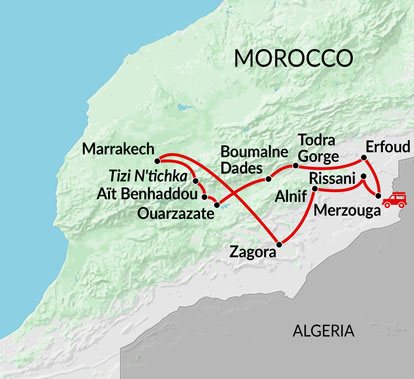 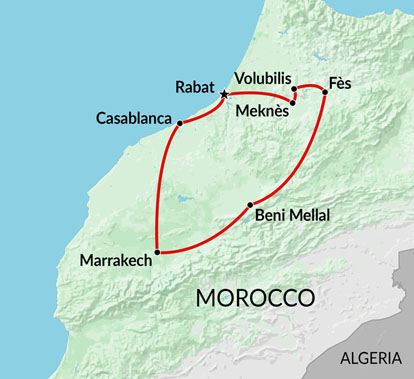 This budget Morocco tour gives a fantastic introduction to the imperial cities of Casablanca, Rabat, Fez and Marrakech, with busy medinas and amazing historic sites to explore and great opportunities to try local Moroccan cuisine.

Morocco is a country that can only be described as wondrous, it is known for its conjurers and snake charmers. The country is a journey into a tranquil and timeless world that is characterized by colorful-painted towns, cute coastal villages that cling to hillsides as well as remote outposts which are protected by fairytale adobe forts.

Morocco is essentially a merging of the Arab and African worlds, a country steeped in very old customs. There are several reasons why Morocco appeals to people from all walks of life but it is its top attractions that continue to enchant everyone who visits.

This old city is accessed from the large plaza of Djemma el-fna Square where it appears that half of the city meets in the course of the day. In the evening, it is thronged by random acrobats, snake charmers, traditional musicians and stall vendors.

The Medina comprises of a world of shopkeeper hustle and interesting alleyways that resemble a maze. A visit to the Marrakesh Medina is a wonderful experience that is full of noisy and colorful local life.

This attraction is the landmark building of Casablanca. It is a lavish symbol of Casablanca city and the entire Morocco. It is a modern mosque that ad its construction completed in the year 1993.

It is situated on a two hectare site and it took an astounding 10,000 artisans to bring it to a successful completion. The mammoth of a building has every centimeter covered in aesthetically appealing decoration detail.

It features zellige tile details, vibrant mosaics and marble pieces that have been intricately carved. The Hassan II Mosque is a Moroccan attraction that pays tribute to the traditional Islamic architecture but still manages to feel contemporary.

This is a major cultural destination in the whole of Morocco, an old city that can accurately be described as an authentic muddle of a place.

Back alleys with gorgeous old doors and chipped plasterwork characterize it and are what will make you stop to take some beautiful photographs at every corner. The stinking tanneries are also a popular attraction for people who are able to handle the smell. It is a paradise of beautiful local craftwork such as colorful Moroccan slippers, tiles, rainbow-glass lamps, metalwork and leatherwork.

This city is considered the most European amongst all cities in Morocco. It has a slightly debauched and fascinating role in the 20th century literary history.

It is believed to be the city that is inspired great and famous works like The Sheltering Sky by Paul Bowles and Naked Lunch by William Burroughs. The prime tourist attractions in Tangier are winding lanes in the city.

It has a magnificent coastline that is dotted with several picture-perfect seaside villages. It is definitely an incredible base to explore that area of Morocco.

It is a beautiful labyrinth that consists of blue-on-blue buildings. Chefchaouen has a photogenic glow that is just incredible.

There is a lot of wonderful architecture to be viewed in the peaceful and easygoing town. There is no better to recharge from the life in the city than here.

Morocco is indeed an adventure into the stunning scenery that makes up North Africa with the craggy heights of the Atlas Mountains lying beyond and the desert on its doorstep. Visit any of the above top attractions to have an experience of a lifetime.