Five countries to visit before you die 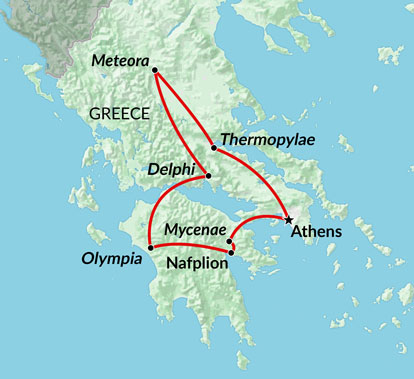 This week-long Greece tour explores the Athens Acropolis, Argolis & the beautiful Mediterranean coastal town of Nafplion, ancient sites of Mycenae, Olympia and Delphi, and the amazing scenery and clifftop monasteries at Meteora.

The world is made up of 195 countries and as tempting as it is to explore them all, this may be an unrealistic feat for some of us. Restrictions like time, money and daily commitments come into play when dreaming of spontaneously hopping on a plane.

We're not saying that you should limit your travel aspirations, but rather be more selective in your search and carefully choose the world's most remarkable countries - the ones that are definitely worth the journey.

To save you from hovering over a globe or a map with a pen, we have narrowed down the list to five countries to visit before you die.

For those wanting to take a comprehensive look into the past, an Egypt tour is the ideal way to explore this historical country. Egypt is a country rich in history, this cradle of civilisation dates back to the 10th millennium BC. Ancient Egypt saw the sophisticated developments of agriculture, writing and the building of the pyramids.

These iconic landmarks, rising out of a desert landscape, are just three Egypt's of many architectural wonders.

This year-round destination, home to seven World Heritage Sites, calls for a hat, a sturdy pair of shoes and an adventurous spirit. Inland, crumbling Pharaonic temples rest alongside the remnants of Roman trading outposts.

The longest river in Africa, the Nile, serves as a link to colossal waterside monuments and weaves its way through vast valleys. The rambling capital of Cairo possesses a modern front while medieval mosques and fortifications are hidden at the end of snaking backstreets.

Beyond the commotion of the city, the ragged coastline of the Red Sea is a diving haven of fluorescent coral wreaths and lustrous waters.

If you want to truly discover Egypt, tick off all of the main sights, understand the culture and mingle with the locals, check out these Egypt tours.

Beginning in Cairo, many of these Egypt tours visit the cities of Luxor and Aswan before sailing down the Nile and concluding in Hurghada by the Red Sea. With the assistance of an expert local guide, you will not only get to see the famous attractions, but also another side to this fascinating country.

Morocco is an explosion of colour - from the rusty-red dunes of the Sahara Desert to the vivid shades of the uniquely shaped doors. Follow in the footsteps of traders past along the snaking alleys of the medinas.

As the sun sets across the magnificent Atlas Mountains, food stalls light-up and a curtain of spice-infused steam falls across the city. Underneath glazed shallow pots; tagine stews are slowly cooked to perfection and juice-vendors scuttle around with crates of oranges, waiting to be squeezed. Decorative mosques, their minarets climbing into the clouds look out over rows of rooftops lined with terracotta tiles.

During the day, dappled street cafés promise refuge from the heat and people watching is best accompanied with a cup of Arabic coffee. Hours are lost in sprawling souks, intricate webs of souvenirs, leatherwork and pottery. Marketplaces serve as public stages for energetic performances and traditional dancing.

Refuge from the bustle can be sought in the arid countryside on steeped camel trails or in the coolness of a riad with fountains trickling in the background. Our Morocco tours offer the perfect introduction to this beautiful land.

A Jordan tour will take you to a  Middle Eastern myriad of splendor renowned for its illustrious desert scenery, but remembered for its welcoming and warm hospitality. Traverse the trails of Crusaders, starting with the King's Highway and passing rickety castles, Roman ruins and pastoral villages.

The ancient 'Rose Red' city of Petra, an imperative stop, is built into the sandstone escarpment and changes with colour with the dancing of the sun. Within this UNESCO World Heritage Site, the Siq and the Treasury are two of many notable spectacles.

As the road disappears, sturdy jeeps bound into the rocky desert of Wadi Rum, a cavernous stretch of sand fringed by rising crags. Resident Bedouin locals greet you at tented camps, giving you time to take in a setting that inspired and bewitched writers like D.H. Lawrence. Nothing can compare to the interminable stillness and silence of this desert at night.

The canopy of speckled crystals, sparkling against a velvet sky is too enchanting to capture.
With the sunrise over the monolithic rockscapes, the escapade continues to the banks of the Red Sea. At 408m below sea level (the lowest point on earth), these famous hypersaline waters are as salty as they are salubrious.

With a captivating history and a reputation as the birthplace of democracy, and political science, Greece's culmination of cultural relics is outstanding.

Engineered masterpieces like the Acropolis and the Parthenon exude an ethereal feel, as do Meteora's monasteries set on stony outcrops. It is easy to imagine the past within the present in Olympia, the birthplace of the Olympic Games and the ancient theatre of Epidaurus. Greek Temples, constructed to appease the Gods lie at the end of Byzantine paths and museums, brimming with artifacts help piece together ancient events.

Beyond the culture, a Greece tour will take you to its sublime coastline of shimmering waters and alluring islands which draw the crowds. Whitewashed houses balanced on volcanic cliffs are a striking sight against the sapphire sea.

Flagged streets by bougainvillea-laden walls open up onto squares, sprinkled with tables that fill up as night falls. Plates of fresh seafood, salads and freshly baked bread soon cover up tabletops and the background hum of chatter rises as the ouzo flows.

Regarded by Jews, Christians and Muslims as the biblical Holy Land, this Middle Eastern country has a profusion of sacred sites. Many of which can be found in Jerusalem where the three religions are devotedly practiced.

Positioned on a plateau in the Judaean Mountains, this is one of the oldest cities in the world. Jerusalem's Old City is a spiritual sanctuary as can be seen by the collection of golden domed shrines, ancient monasteries and the remnants of the Western Wall - a place of Jewish prayer and pilgrimage. This 2000-year-old wall welcomes members of all faiths and is open 365 days a year. As it is Judaism's holiest prayer site, you will see worshippers reciting scriptures, their hands grasping the stone.

A more contemporary way of life ticks on in Jerusalem's downtown area and in the second most populous city of Israel, Tel Aviv. This urban hub is on the Mediterranean coast and what it lacks in culture, it makes up for with its cosmopolitan liveliness.

By the Judean Desert, the Dead Sea is dissonantly quiet, its waters rich with salt and minerals. Parallel to gaping canyons, Ein Gedi Nature Reserve is a tranquil and magical oasis with hiking routes leading to breathtaking waterfalls, hidden behind leafy veils.